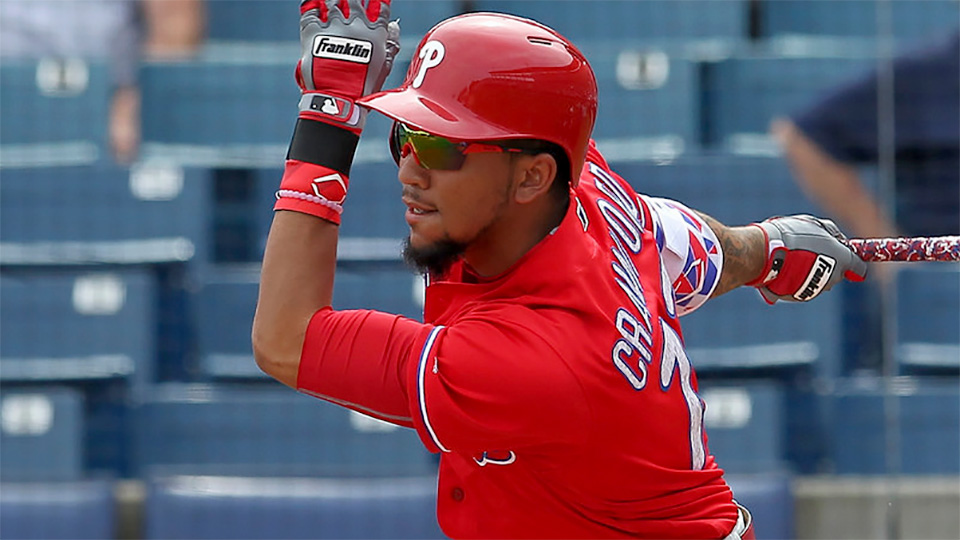 Everyone knows the Phillies are in the midst of a rebuild. They haven't made the playoffs since 2011 and finished last in the National League East the past two seasons. Any good rebuild starts with a good farm system, and any good farm system has a very good prospect cornerstone. The Phillies farm was ranked by MiLB.com as the seventh-best in the game, and a decent amount of that falls on the shoulders of top prospect Crawford.

The 21-year-old shortstop sits at No. 5 in MLB.com's overall prospect rankings, thanks to an impressive overall profile. His fielding and arm tools are considered to be particularly good at one of the game's toughest positions, and he's hit well at each stop he's made since being taken 16th overall in the 2013 Draft. As a 20-year-old last season, Crawford batted .265/.354/.407 while walking more times (49) than he struck out (45) over 86 games at Double-A Reading.

"The thing we like so much about J.P. is that he's becoming so much more and more consistent," said Phillies director of player development Joe Jordan. "There are certain things that he's had to improve upon, whether it's his backhand or body-control plays where you have to get the ball out quick. We've challenged him the last two-and-a-half years in areas where he really needed to get better, and he responded so well to that kind of challenge and has answered every one of them. The consistency defensively has really impressed me.

"I trust this guy a lot. He's going to be a two-out shortstop in the big leagues."

That chance at the Majors might come as early as this summer. Philadelphia said this week that Crawford will head back to Reading to start 2016, but it shouldn't be long before he moves up to Triple-A Lehigh Valley. If he continues to perform well against older pitching at the higher levels, the Phillies -- who will have Freddy Galvis as a placeholder at short -- could do worse than getting Crawford some Major League experience in what should otherwise be another down year.

The Phillies' last-place finish in 2014 gave them the 10th overall pick in last June's Draft. They used that selection on the high-school shortstop and moved Randolph to left field after he signed. This offseason, the 18-year-old told MiLB.com in a Q&A that he was still learning the position this offseason. The Phils like what they've seen from him so far in that department.

"I didn't see anything alarming whatsoever in the [Rookie-level] Gulf Coast League and instructional league with his playing the outfield," Jordan said. "He got better all summer. Instructional league was very helpful because you take him out of the competitive environment of the GCL or any league and work on things. I thought he made a great transition. I think his throwing got better. He needs reps, the footwork, the technical parts. But he's instinctive. He's a ballplayer. No reason why he can't be a good outfielder."

As far as offense goes, the 5-foot-11, 205-pound teenager projects to be above-average in both hitting for average and power. He showed off his hit tool, in particular, last summer in the GCL, where he produced a .302 average, .425 OBP and an even 32/32 K/BB ratio over 53 games.

"I think what our scouts described last year in the Draft room was spot-on," Jordan said. "They called him the best hitter in the Draft. I can't remember if they said high school or college. But this kid can hit. He's got an idea of the strike zone. For me, with these young guys, Cornelius is smart enough to know what's supposed to happen. He'll have enough power. Right now, he's a hitter, which I wish I could give everyone in camp his mind-set. Just hit."

Randolph will try to do just that during his full-season debut at Class A Lakewood.

Appel was a bit of a surprise inclusion in the deal that sent reliever Ken Giles to the Astros back in December. The 24-year-old right-hander was the No. 1 overall pick back in 2013, but struggled immensely in his first two full seasons. There were some improvements last year, but Appel still finished the season with a 4.37 ERA and 1.41 WHIP over 131 2/3 innings between Triple-A Fresno and Double-A Corpus Christi. Appel told MiLB.com he was looking forward to a fresh start in the Phillies system.

The results have hurt Appel's stock some, although he is still ranked as baseball's No. 70 overall prospect. His stuff grades well, with both his fastball and slider considered above-average, and that's what the Phillies liked out of the Stanford product in his first Spring Training.

"He's got a good arm, a good slider. He has all the physical weapons," Jordan said. "Big, strong kid. That's a starting pitcher's body. He should be able to stack some innings on. I've been very impressed with the raw tools, but I'd seen those in the past [from him]. It's been a few years when I was still scouting, I knew he had a great arm. We're in the 'We're getting to know him, he's getting to know us' period, but the raw ability is easy to see."

However, this might be the season in which a decision about Appel's future role comes to a head. If he doesn't show improved results as a starter at Lehigh Valley, the Phillies could try Appel out as a reliever, where his stuff would especially play up in shorter stints. That should make him one of the more fascinating prospects in the system in his first summer with the organization.

Quinn is known for two things at this point in his career -- his speed and his inability to stay on the field. The Phillies' No. 7 prospect has battled wrist, Achilles tendon and hip flexor injuries over the past two years and has yet to make more than 382 plate appearances in a single season since being taken in the second round of the 2011 Draft.

When he is on the field, he can certainly fly. Quinn received an 80 grade on the 20-80 scale for his run tool from MLB.com this offseason and is coming off a season in which he swiped 29 bags in 58 games at Double-A Reading. That speed helped him produce a high .360 BABIP at the level which, in turn, raised his average to .306. Because of his speed, Quinn's whole profile, including his move from shortstop back to center field in 2014, has been raised.

"There's no one in our system that can put more pressure on an opposing team than Roman Quinn," Jordan said. "Night in and night out, he can impact the game in so many ways because of that, because of his speed. It plays on both sides of the balls. I've seen him make a defense so uncomfortable because of what he might do. He can lay down a bunt, run 3.5 from the left side and then hit the ball out of the park the next at-bat or go the opposite gap for a triple. I think he needs to develop more as a hitter. He needs to get the strikeout numbers down. But he's growing in every aspect of the game."

Jordan added the organization is working with Quinn on strategies to keep him on the field for a full season, starting with hydration. (Dehydration led to his torn hip flexor last June.) Like Crawford, Quinn will start out in Reading, but could fly up the chain..

"Give us five, six months," Jordan said, "see what we can do with him."

At No. 8, Kilome is the highest-ranked Phillies prospect who is not also ranked among the Top 100. The 20-year-old right-hander will have every chance to build his case for inclusion, though, when he makes his full-season debut with Lakewood this summer. Kilome already has a plus-plus fastball and a decent curveball, even though his low 6.1 career K/9 doesn't quite match the profile. Work on his below-average changeup could improve Kilome's numbers and stock this season, but the Phillies aren't worried just yet.

"I don't think we're to the point with him that that is our focus," he said. "His focus is to continue to develop fastball command, curveball command. He's got two pitches that are really, really good on occasion. Consistency, like any young player, that's the focus. He's got a changeup that he'll use. But the focus for me and us is command of the first two pitches. At some point and time, we'll expand it."

More to keep an eye on: Right-hander Jake Thompson, outfielder Nick Williams and catcher Jorge Alfaro -- all Top-100 prospects -- will be spending their first full seasons with the Phillies after last year's deadline deal with the Rangers and each contribute to the top-heavy feel of the system. It wouldn't be a surprise to see all three make their Major League debuts at some point in 2016. ... Speaking of catchers, Andrew Knapp made a big jump offensively last season at Reading, where he hit .360/.419/.631 with 11 homers in 55 games. Because of those numbers -- and Alfaro's need for more development time at Double-A -- the 24-year-old switch-hitter will be pushed to Lehigh Valley to start the season.