Pitchers of the Week

For the week ending June 26 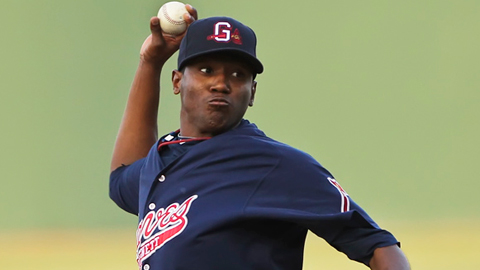 Stats are for games played from June 20-26 (for Short-Season leagues, stats from the start of their seasons)

International League
Julio Teheran, Gwinnett
2-0, 1.80 ERA, 2 G, 2 GS, 15 IP, 9 H, 3 R, 3 ER, 1 HR, 0 HBP, 0 BB, 12 K
After putting together consecutive scoreless starts on June 9 and June 14, Teheran tossed two more terrific games this week. Pitching against Syracuse on Monday, the Braves prospect permitted a couple of runs on five hits while striking out eight over eight innings, refusing to issue a free pass. Over seven innings at Columbus on Saturday, Teheran allowed four hits, one of which was a solo homer. That would be the only run he'd surrender, though, and he fanned four. He's not walked a batter since June 4.

Pacific Coast League
Elih Villanueva, New Orleans
0-1, 1.29 ERA, 2 G, 2 GS, 14 IP, 7 H, 2 R, 2 ER, 0 HR, 0 HBP, 5 BB, 13 K
Elih Villanueva struggled with his command in his first start of the week, walking five over six innings. The Marlins prospect limited the damage to two runs, though, by giving up just three hits, and he also struck out five. In his next start, he was in total control. Facing the Sounds in Nashville, Villanueva unfurled eight shutout innings without allowing a single walk. He gave up four measly hits and struck out eight.

Eastern League
Henderson Alvarez, New Hampshire
1-0, 0.00 ERA, 1 G, 1 GS, 7 IP, 2 H, 0 R, 0 ER, 0 HR, 0 HBP, 1 BB, 5 K
Blue Jays prospect Henderson Alvarez has generally been one tough son of a gun since coming to the Eastern League in late May, and this week he made his best start yet. On Tuesday, Alvarez allowed a single to the first Altoona batter he faced, gave up a triple in the third and then shut the Curve down completely. Over seven scoreless innings, he struck out five and walked one and didn't allow a third hit.

Southern League
Terry Doyle, Birmingham
1-0, 0.00 ERA, 1 G, 1 GS, 1 CG, 1 SHO, 9 IP, 3 H, 0 R, 0 ER, 0 HR, 0 HBP, 2 BB, 4 K
White Sox right-hander Terry Doyle, who threw his first complete game in the Carolina League earlier this year, used his opportunity this week to toss his first shutout, pulling off the feat in his fourth Double-A outing. Pitching against Tennessee on Sunday, Doyle allowed two doubles, a single and two walks but kept the Smokies away from the plate. He struck out four, and his Southern League ERA dipped down to 2.67 over his 27 innings at the new level.

Texas League
Gary Daley, Midland
1-0, 0.00 ERA, 1 G, 1 GS, 8 IP, 1 H, 1 R, 0 ER, 0 HR, 1 HBP, 3 BB, 6 K
Oakland Minor Leaguer Gary Daley improved to 6-2 over 15 starts across three Minor League levels this week, beating the RoughRiders at Frisco on Wednesday. He gave up just one hit -- a fifth-inning single -- over eight innings but Frisco pushed an unearned run across in the sixth with a stolen base sandwiched between two errors. Daley struck out six and walked three. He hasn't allowed more than two runs in an outing since June 6.

Carolina League
Robert Ross, Myrtle Beach
1-0, 0.00 ERA, 1 G, 1 GS, 6 IP, 2 H, 0 R, 0 ER, 0 HR, 1 HBP, 0 BB, 4 K
Southpaw Robbie Ross, the Rangers' second-round pick of the 2008 Draft, continued to cruise in Class A Advanced ball. Making his fifth consecutive start on the road, Ross showed no signs of bus fatigue in beating Salem on Sunday. He gave up a one-out single in the first inning and another base hit in his final frame, striking out four over six shutout innings. Ross retired 13 in a row from the second inning into the sixth.

Florida State League
Trevor May, Clearwater
0-0, 0.00 ERA, 1 G, 1 GS, 7 IP, 1 H, 0 R, 0 ER, 0 HR, 0 HBP, 2 BB, 14 K
Trevor May, who won two Pitcher of the Week awards at two levels last year, picks up his first honor of 2011. The Phillies prospect pitched a 1-2-3 inning and ended up the victor in this week's FSL All-Star Game, but his regular-season start on Wednesday really stands out. May punched out 14, tying a career-high mark, allowing one hit and two walks over seven innings at Tampa. May ended up without a decision, and the game was suspended due to rain with a 2-2 tie in the 10th.

Midwest League
Mike Rayl, Lake County
1-0, 0.00 ERA, 1 G, 1 GS, 6 IP, 1 H, 0 R, 0 ER, 0 HR, 0 HBP, 0 BB, 8 K
Indians prospect Mike Rayl, who took home this award for his performance in the first week of May, sparkled again last week, winning for the first time since May 9. Going up against the TinCaps in Fort Wayne on Saturday, Rayl struck out the first two hitters he faced and retired the first four in a row. The single that broke up that streak was the only hit he allowed over his six shutout innings, and he struck out eight without giving up a walk.

South Atlantic League
Jarret Martin, Delmarva
0-0, 0.00 ERA, 1 G, 1 GS, 6 IP, 1 H, 0 R, 0 ER, 0 HR, 0 HBP, 2 BB, 8 K
Jarret Martin spent the first chunk of this year working out of the Delmarva bullpen, and he was iffy over his first five starts. In his sixth start, though, Martin was nothing but impressive. On Thursday, Martin took the hill against Lakewood and flirted with a no-hitter. He set down eight a row, and when the ninth hitter walked, Martin picked him off. The BlueClaws finally managed a single with two outs in the sixth, which was Martin's final inning of work. He struck out eight and walked two in the gem.

Northwest League
Kable Hogben, Yakima
1-0, 0.00 ERA, 4 G, 8 IP, 3 H, 0 R, 0 ER, 0 HR, 0 HBP, 0BB, 14 K
Australia-born righty Kable Hogben was decent through six relief appearances in the Midwest League this year, striking out eight and walking four while maintaining a 3.12 ERA over 8 2/3 innings. In the Northwest League, though, he's been simply dominant. The Arizona prospect hasn't walked anybody nor allowed a run over eight innings so far, and he's amassed 14 strikeouts over that four-game period. He struck out five and gave up one hit over three dynamite innings in his first Short-Season outing of the year, earning a win.

Appalachian League
Brett Mitchell, Kingsport
1-0, 0.00 ERA, 1 G, 1 GS, 5 IP, 0 H, 0 R, 0 ER, 0 HR, 0 HBP, 1 BB, 6 K
Brett Mitchell, a 12th-round pick of the Mets from last year, struggled to a 5.94 ERA over eight Appy League starts in his first pro summer. Already, things are looking brighter this summer. Mitchell kicked off the year by throwing five no-hit innings against Bristol on Saturday, striking out six while only issuing one free pass. He didn't allow a baserunner through his first three innings, and the Kingsport offense provided plenty of support to give the righty his first win of the year.

Pioneer League
Stalin Gerson, Billings
2-0, 0.75 ERA, 2 G, 2 GS, 12 IP, 7 H, 1 R, 1 ER, 0 HR, 0 HBP, 3 BB, 10 K
Stalin Gerson was tough over two starts in the Midwest League earlier in the month, but he's really finding his form with the Mustangs. Gerson struck out five and allowed four hits without walking anybody over six shutout innings against Great Falls on Tuesday, and pitching at Helena on Sunday, he was nearly as good. The Reds prospect permitted a run on three hits and three walks, striking out five to grab his second Pioneer League victory in as many 2011 chances.