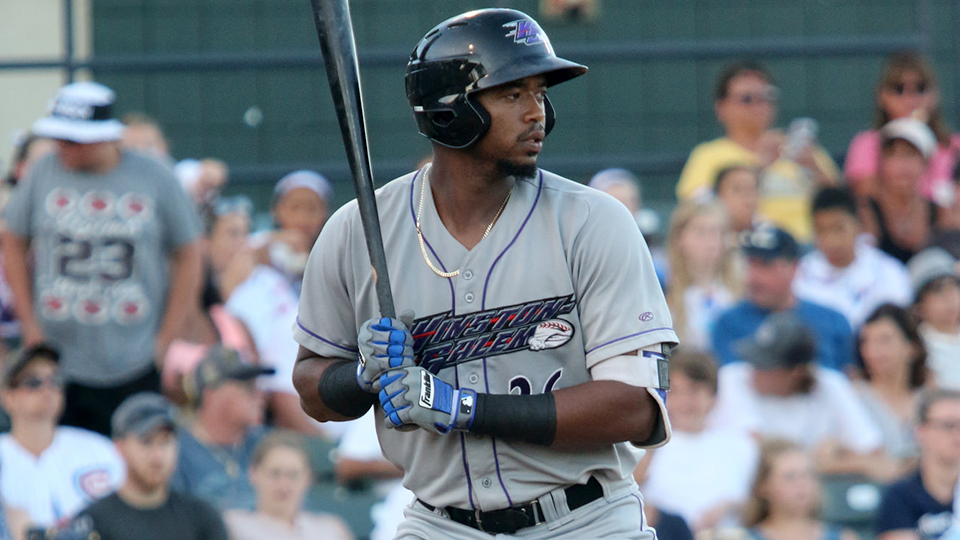 White Sox OF Eloy Jimenez, Class A Advanced Winston-Salem: 3-for-5, HR, 2B, RBI, 3 R -- There's a lot of power in this edition of the Roundup, and what better place to start than with one of the Minors' most prolific sluggers. Jimenez continued his onslaught of the Carolina League on Tuesday, collecting at least three hits for the third time in 23 games since his trade from the Cubs to the White Sox, and in all three cases, two of those hits went for extra bases. He owns a .369/.430/.714 line with six homers, one triple and nine doubles for the Dash, pushing his season slash line to .305/.378/.569 with 14 homers in only 65 Carolina League games when you add his time with Myrtle Beach. He's also equaled his 2016 homer total in 47 fewer games -- a clear sign that the 20-year-old's power is only growing in his second full season. Jimenez is behind only Yoan Moncada on MLB.com's ranking of White Sox prospects and has climbed to No. 7 on the overall list, meaning Chicago will still have a considerable offensive talent at the top of its rankings whenever Moncada graduates.

A's SS/3B Sheldon Neuse, Class A Advanced Stockton: 3-for-4, 2 HR, 4 RBI, 3 R -- Speaking of prospects making big-time first impressions, Neuse continues to take off following his trade from the Nationals to the A's on July 16 for relievers Ryan Madson and Sean Doolittle. After acquiring him, the A's immediately moved the 2016 second-rounder, who had been playing at Class A Hagerstown, to Class A Advanced, and he's shined with Stockton since. Tuesday marked the second time he's homered twice in a game, and both performances have been with the Ports. Neuse is batting .397/.474/.706 with six homers and three doubles in 18 games with Stockton, and though part of that might be the result of playing in the California League, it's notable that Neuse has 15 homers in 95 games on the season, building on what had been a power jump his junior year at Oklahoma in 2016. He continues to split time between shortstop and third base, though he's more likely to stick at the latter the higher he climbs with Oakland.

Rockies 2B/SS Garrett Hampson, Class A Advanced Lancaster: 4-for-5, HR, 3B, RBI, 3 R, SB -- The JetHawks lost an impressive middle infielder when Brendan Rodgers moved up to Hartford in late June, but Hampson is doing his best to make sure they don't miss Rodgers too much. Unlike Rodgers, the 2016 third-rounder's best tool is his plus speed, and he showed that off with an inside-the-park home run as well as his 40th stolen base of the season, putting him in a tie for fourth among all Minor Leaguers. (Teammate Wes Rogers is tops with 60.) Beyond the speed, the Rockies' No. 8 prospect also tied a season high with four hits Tuesday, pushing his season line to .309/.372/.441 through 105 games. He's not a power hitter simply taking advantage of Lancaster's homer-friendly environment, so there's a solid chance his bat will translate as he continues up the ladder -- especially if he can keep using his speed to pick up hits and extra bases. He's split time between short and second in his first full season, but the Rockies would love to one day reunite him with Rodgers up the middle in the Majors, likely with Hampson at the keystone.

Astros OF Daz Cameron, Class A Quad Cities: 4-for-4, HR, 4 RBI, 2 R, SB -- It's taken some time, perhaps more time than most Astros fans would like, but Cameron seems to be finding himself at the plate of late. Houston's No. 9 prospect tied a career high with four hits Tuesday against Beloit, giving him at least one hit in each of his eight games this month. The 2015 37th overall pick saw his stock plummet in 2016, when he hit just .143 in 21 games for Quad Cities, got demoted to Class A Short Season Tri-City and then missed significant time with a broken left index finger. He started off slow again in 2017 with a .211/.290/.398 line through June but has since caught fire, producing a .352/.417/.584 line with five homers, three triples, eight doubles and eight steals in 33 games since July 1. His 1.001 OPS in that span is fifth among Midwest League hitters. Even when he wasn't hitting, Cameron was an asset defensively, but the fact that his bat is starting to produce consistently, even at a repeated level, should have everyone in Houston breathing a sigh of relief.

Brewers OF Tristen Lutz, Rookie-level Helena: 3-for-4, 2 HR, 2 RBI, BB -- The Brewers got a tad aggressive with this year's No. 34 overall pick, promoting the 18-year-old outfielder after he hit three homers in 15 games at the complex-level Arizona League. Well, after his second career two-homer game Tuesday, he's now gone deep three times in only six contests with Helena. Taken out of an Arlington, Texas high school, Lutz has had no issues seeing his above-average power translate to the professional level with 14 extra-base hits in 21 pro games so far. He's hitting .330 with a .398 OBP between the two spots, showing that he's more than just a power bat, but he does have 22 strikeouts in 99 plate appearances as well. The Brewers have a ton of toolsy outfielders in their system right now between Lewis Brinson, Corey Ray, Brett Phillips, Trent Clark and Monte Harrison, but Lutz is doing all he can early on to stick out.