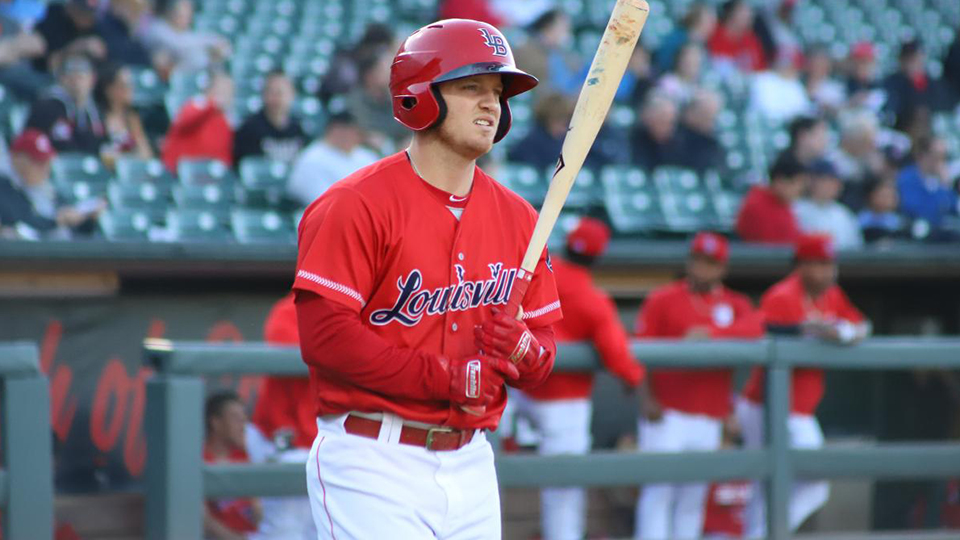 Josh VanMeter recorded five hits a game for the first time in his career on Friday. (Taris Smith/Louisville Bats)

Reds 2B Josh VanMeter, Triple-A Louisville: 5-for-6, 2 HR, 3 RBI, 3 R -- It was a career night for VanMeter and the highest-scoring contest in Louisville Slugger Field history. The 24-year-old infielder went off for a personal-best five hits and homered twice in a game for the second time this season. The 2013 fifth-round Draft pick by the Padres is batting .349/.409/.699 on the year with eight homers and 20 RBIs. He leads all Triple-A hitters in jacks and is tied atop the RBI leaderboard with Charlotte's Zack Collins. His 1.107 OPS ranks third in the league and his 29 hits are tied for best on the circuit. It's a marked improvement for the Reds prospect, who clubbed 11 long balls and drove in 45 runs for the Bats in 2018 over 98 games while hitting .253. Gameday box score

Braves 3B Austin Riley, Triple-A Gwinnett: 2-for-4, HR, 2 RBIs -- Atlanta has Josh Donaldson manning the hot corner in the big leagues, and the thought entering this season was that Riley could be readily available. The Braves' No. 5 prospect scuffled to begin the season, although a turnaround appears to be in the works. On Friday, MLB.com's No. 35 overall prospect homered for the second straight game -- a solo shot in the third -- and plated another run with a single an inning later. Riley was batting .180 10 days ago, but he's boosted his slash line to .244/.311/.439 since. Gameday box score

Cubs C Miguel Amaya, Class A Advanced Myrtle Beach: 1-for-4, HR, 2 RBIs -- The Cubs' top prospect had only one hit, but it was a big one. With one on and one out in the fourth, Amaya crushed a 1-0 offering from Salem starter Enmanuel De Jesus over the left-field wall to cut the Pelicans' deficit to one. Myrtle Beach couldn't complete the comeback, but the No. 89 overall prospect has four homers three weeks into the season. Last year, with Class A South Bend, the Panama native cleared the fence 12 times in 116 games. Gameday box score

Brewers P Adam Hill, Class A Wisconsin: 6 IP, 8 K, 1 H, 4 BB -- Coming off a pair of tough outings, Hill appeared to be headed down that road again. Having allowed four free passes and a double through the first two-plus innings, the Brewers No. 27 prospect responded by sitting down the final 12 hitters he faced to pick up the win and move to 2-1 on the year. The Mets selected the right-hander in the fourth round of last year's Draft, but the new front office shipped the South Carolina product to Milwaukee in the deal that brought Keon Broxton to Flushing. At 6-foot-6, 225 pounds, Hill has a presence on the mound that allows him to use his deception with a long extension. Gameday box score

Mariners OF Jarred Kelenic, Class A West Virginia: 1-for-4, 1 HR -- Speaking of 2018 Mets Draft picks who've been traded, Seattle's No. 2 prospect extended his hitting streak to 12 games with a solo shot -- his third homer of the season -- on the first pitch of his at-bat against Asheville right-hander Ryan Feltner in the sixth. The No. 53 overall prospect is batting .320/.427/.493 with 10 RBIs, 13 walks and four stolen bases in 19 games. The 19-year-old started the year in a 1-for-25 slump. Gameday box score

Rays SS Wander Franco, Class A Bowling Green: 1-for-4 -- The stat line might not reveal much, but the Rays' top prospect pushed a knock through the right side in the sixth to up his hitting streak to 12 contests. In two weeks, the No. 12 overall prospect has elevated his average from .200 to .329 and currently sports a 1.012 OPS through 19 games. Franco entered Friday with six extra-base hits in his previous three games. Gameday box score

Blue Jays P Josh Winckowski, Class A Lansing: 7 IP, 8 K, 5 H, 0 R -- Perhaps an underlying reason for Franco's lone hit was Winckowski. Coming off six scoreless innings his last time out, the Jays prospect one-upped himself. This time, the right-hander tossed seven scoreless frames against Bowling Green and scattered five hits along the way while notching a season-high eight punchouts. The 20-year-old threw 63 of 99 pitches for strikes and lowered his ERA to 1.04. For the first time in five starts this season, he did not walk a batter. Gameday box score

D-backs 3B Kevin Cron, Triple-A Reno: 2-for-4, HR, 2B, 4 RBIs, 2 BB, 1 R -- A night after he drilled three home runs, Cron provided two more extra-base hits. He found his long ball stroke again in the third with a two-run shot to right-center and lined a two-run double to center the next frame. The blast was his 10th of the year, which tied him with No. 3 Astros prospect Yordan Alvarez for the lead in the Pacific Coast League. He also leads the circuit with 30 RBIs and ranks second in slugging percentage (.865) and OPS (1.313). Gameday box score