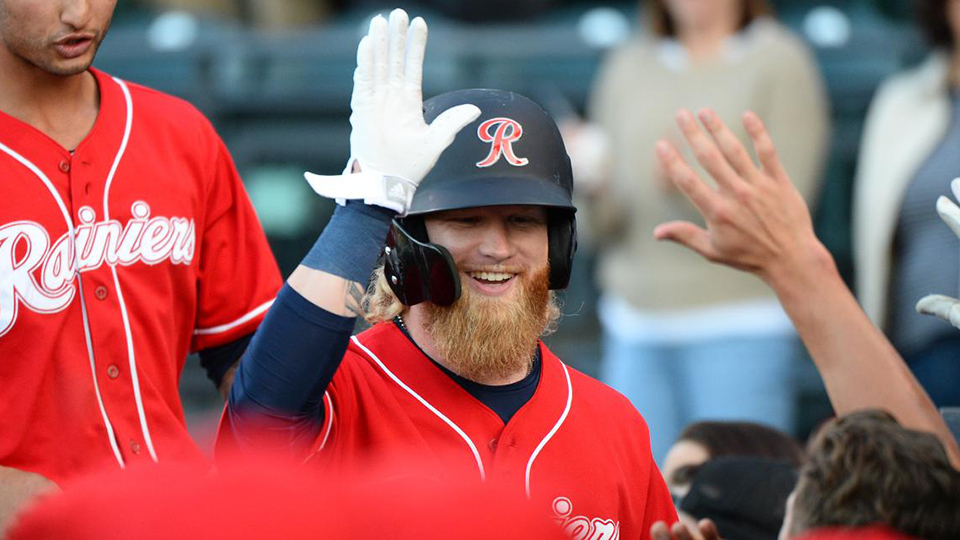 Jake Fraley was promoted to Tacoma after posting a .925 OPS in 61 games with Double-A Arkansas. (Jeff Halstead/Tacoma Rainiers)

Mariners OF Jake Fraley, Triple-A Tacoma: 4-for-6, 1 3B, 2 2B, 5 RBI -- On a night that featured 29 runs and 34 hits in the Rainiers' 15-14, 10-inning win over Albuquerque, Seattle's No. 14 prospect stood out. Fraley led all players with a career-high five RBIs, nearly matching the hit total (five) through his first six games at the Triple-A level. The LSU product doubled in the second and third innings, then tripled in the fourth against Isotopes starter Kyle Freeland before delivering the go-ahead single, stealing a base and scoring an insurance run in the 10th. Gameday box score

Rays SS Wander Franco, Class A Advanced Charlotte: 2-for-3, HR, 2 BB, RBI, 2 R -- MLB.com's top overall prospect has to have a quiet night in the Florida State League eventually, right? Not yet. After going 7-for-12 in his first series with the Stone Crabs, Franco reached base four more times against Palm Beach. He homered in his second straight game and has a .600/.667/1.067 slash line in four games since his promotion from Class A Bowling Green, where he batted .318/.390/.506 with 27 extra-base hits in 233 at-bats. Gameday box score

Giants C Joey Bart, Class A Advanced San Jose: 3-for-6, 2 R: The Minors' top-ranked backstop extended his hitting streak to six games with three singles in the Giants' 11-8, 10-inning loss to Stockton. It was the first three-hit game of the season for Bart, who's posted a .250/.299/.431 slash line in June, when he returned to action after missing more than a month with a broken left hand. San Francisco's top prospect has cranked out five big flies and plated 19 runs in 25 games en route to earning a spot in the All-Star Futures Game next month. Gameday box score

Athletics OF Jameson Hannah, Class A Advanced Stockton: 4-for-6, 3B, 3 R, 2 RBI: The seventh-ranked A's prospect was a catalyst at the top of the Ports lineup, registering his third four-hit game of the season. Hannah singled in the third, seventh and eighth innings, then delivered an RBI triple and scored in the decisive three-run 10th. Since hitting .226 in April, the 2018 second-round pick is batting .328. He's climbed into sixth place in the California League with a .294 average. Gameday box score

Yankees C Anthony Seigler, Class A Charleston: 2-for-2, 3 RBI, 3 BB -- New York's No. 6 prospect reached base five times to help the RiverDogs cruise past Asheville, 12-5. After drawing walks in the first and third innings, Seiger singled home two runs in the fourth and walked again in the sixth. The 2018 first-round pick came through with another RBI single in the seventh, completing his fourth multi-hit effort in 14 games with Charleston. Gameday box score

Cardinals OF Dylan Carlson, Double-A Springfield: 3-for-4, 1 HR, 2 RBI, 2 R -- St. Louis' No. 2 prospect started Springfield's night with a home run to right-center field. Carlson tacked on singles to left in the fifth and seventh before lifting a sacrifice fly to center in the eighth. The three-hit showing was his seventh this season and first since June 7. The 20-year-old is fourth in the Texas League with an .874 OPS and fifth with a .500 slugging percentage. Gameday box score

Twins LF Brent Rooker, Triple-A Rochester: 3-for-5, 1 2B, 2 RBI -- Minnesota's seventh-ranked prospect doubled and singled twice for his third three-hit game of the season. Rooker's .407 on-base percentage ranks fifth in the International League while his .555 slugging percentage is good for 10th. He's winding down his most productive month of the season, with a .348/.508/.630 slash line in June. Gameday box score

Twins SS Spencer Steer, Rookie Advanced Elizabethton: 3-for-5, 1 2B, 4 RBI, 1 R -- Selected by the Twins in the third round of this month's draft, Steer smacked a two-run double in the second inning and singled twice for his second multi-hit game in six Appalachian League games. The University of Oregon product ranks third on the circuit with a .467 on-base percentage and .385 average, seventh with a .615 slugging percentage and is tied for fifth with nine RBIs. A 1.082 OPS is good for fifth in the league. Gameday box score

Nationals 1B Ian Sagdal, Double-A Harrisburg: 4-for-5, 3 2B, 3 RBI, 2 R -- The 26-year-old collected season highs in hits and doubles while driving in three runs and extending his hitting streak to four games. Sagdal ranks fourth in the Eastern League with 20 doubles, is tied for seventh with 40 RBIs and is tied for 10th with 70 hits. By going 8-for-12 in his last three games, he's bumped his average 20 points to .275. Gameday box score

Marlins OF Peyton Burdick, Class A Clinton: 3-for-5, 2 2B, 2 RBI, 2 R -- The Marlins' third-round pick has posted back-to-back three-hit games and is 9-for-22 (.409) in five games with the LumberKings. His hot start in the Midwest League follows his pro debut in the Class A Short Season New York-Penn League, a stint that lasted all of six games in which the Wright State product batted .318. Two of Burdick's hits Friday came during Clinton's 10-run first inning. Gameday box score

Braves SS Braden Shewmake, Class A Rome: 3-for-5, 2B, 2 RBI, R -- Atlanta's first-round pick has played eight games with the R-Braves and recorded multiple hits in five of them, going hitless only in the first. Five of his 15 knocks have gone for extra bases, and the Texas A&M product is batting .433 with a 1.137 OPS and seven RBIs. Against Greenville, he got Rome on the board with an RBI double in the first inning off 20th-ranked Red Sox prospect Alex Scherff. Gameday box score

Mets 2B Luke Ritter, Class A Short Season Brooklyn: 5-for-6, 1 HR, 1 2B, 3 RBI, 1 R -- A seventh-round pick earlier this month, Ritter came up a triple short of the cycle as he notched his first multi-hit game in the Minors. Through 11 games, the Wichita State product has a .231/.436/.762 slash line with two homers, two doubles, six RBIs, six walks, four runs scored and 17 total bases. Gameday box score

Mariners LHP Ricardo Sanchez, Double-A Arkansas: 5 IP, 1 H, 0 R, 1 BB, 6 K: Seattle's No. 24 prospect struck out the side in the first inning and was perfect through three en route to his second scoreless outing of the month. Sanchez gave up a lone single on 76 pitches and fanned at least five batters for the fifth time in his last six starts. The 22-year-old posted a 3.95 ERA in the first half of the Texas League season, striking out 71 while walking 18 over 70 2/3 innings. Gameday box score

Nationals OF Justin Connell, Class A Hagerstown: 4-for-5: Washington's No. 30 prospect notched his second four-hit game of the season, with the other coming on May 13 against Delmarva. Against Delmarva, Connell singled in the first, third, fifth and ninth innings. He's 10-for-24 over his last seven games to raise his slash line to .284/.369/.381. Gameday box score