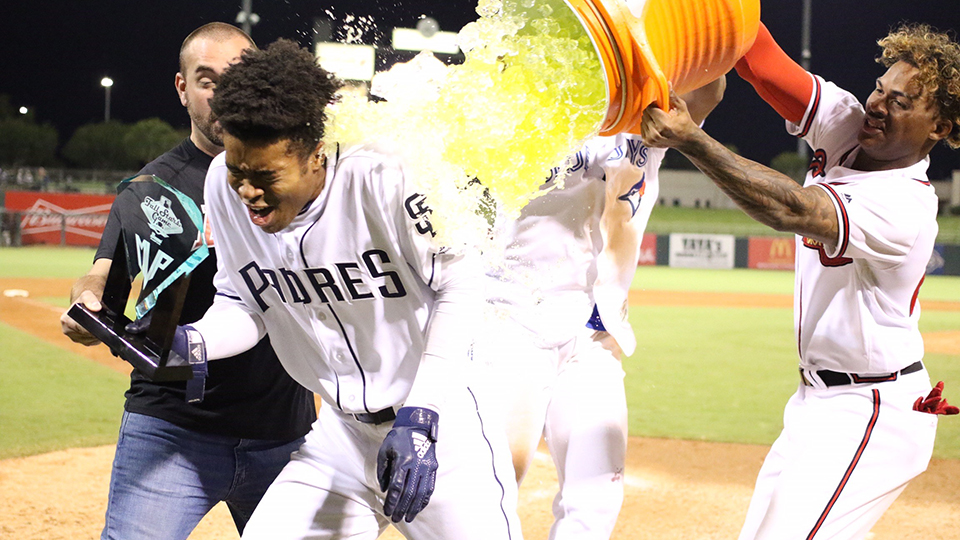 SURPRISE, Arizona -- Down to his final strike, Buddy Reed delivered a game-changer on Saturday night.

With his team trailing, 6-5, the Padres' No. 13 prospect turned on a 3-2 fastball and belted a triple deep to left field to score Vladimir Guerrero Jr. with the tying run. Reed scored on a single by Royals prospect Meibrys Viloria as the West Division walked off with a 7-6 victory in the Arizona Fall League Fall Stars Game at Surprise Stadium.

After Reed missed a 3-1 offering from Rockies No. 17 prospect Justin Lawrence, the East was one strike from the win. But the 2016 second-round pick dug back in and connected, crushing the ball to left to knot things up.

"It was a fastball down and away, but I put a good swing on it," Reed said. "I had to choke up because [facing Lawrence] is a little uncomfortable for me, throwing 98-100 mph with sink."

"The Fall League as a whole is an awesome experience, playing with the top prospects in every organization," Reed said. "Then coming out here to the All-Star Game, you see guys like Vlad, and Justin Lawrence in the bottom of the ninth, just guys that throw hard and guys that can do a lot with the bat. It was awesome."

Blue Jays No. 4 prospect Nate Pearson started for the West and set a personal best. The 22-year-old right-hander threw eight of his 11 pitches over 100 mph, reaching 104 mph.

"The highest I ever hit before today was 102, so it was pretty cool to see new numbers there," MLB.com's No. 90 overall prospect said. "I knew I was only going one inning, so I was just going to let it go, trying to just throw as hard as I can and give those guys my best stuff."

Pearson was limited to one appearance with Class A Advanced Dunedin during the regular season. He was sidelined for a month with a back injury, then suffered a fractured right forearm when he was hit by a line drive in his season debut on May 7.

"I'm very thankful to come out here in Arizona, each lineup is stacked," Pearson said. "I missed the whole year with an injury I couldn't really control, but I'm making the most of my time out here and it's a great opportunity for me."

Peter Alonso gave the East an early 1-0 lead, tagging a 103 mph fastball from Pearson over the wall to the right of center field. The Mets' No 2 prospect belted 36 homers between Double-A Binghamton and Triple-A Las Vegas, tying the Reds' Ibandel Isabel for the Minor League lead. Alonso walked twice, scored three times and got the best of the power matchup of Tampa-area prospects in the first.

"I knew he could hit and I was just going to challenge him," Pearson said. "I got one fastball by him, then tried to get another one, but he was ready for it."

Phillies first baseman/outfielder Austin Listi launched a go-ahead three-run homer with two outs in the eighth for the East. The 2017 17th-round pick out of Dallas Baptist emerged as one of the top hitters in the Florida State League this summer, batting .344/.453/.560 for Clearwater before earning a promotion to Double-A on June 18. He finished with four RBIs.

Indians No. 6 prospect Yu Chang gave the West a 5-3 lead in the sixth, driving an opposite-field liner for a two-run triple.

Astros No. 2 prospect Forrest Whitley twirled two hitless innings for the East, walking two and striking out one while touching triple digits.

The AFL season resumes Monday, with the championship game scheduled for Nov. 17 at Scottsdale Stadium.