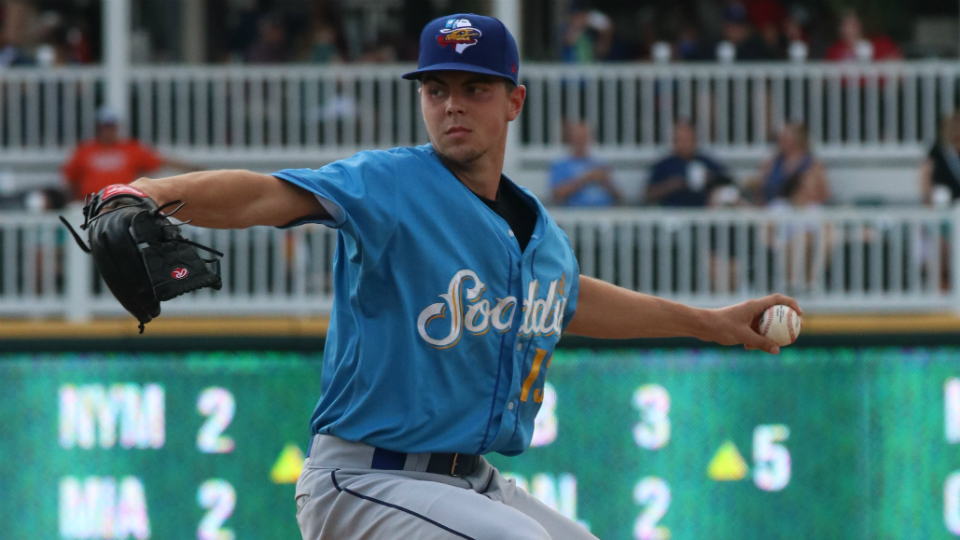 After dominating the California League, MacKenzie Gore picked up right where he left off in his Double-A debut.

The top Padres prospect allowed two hits and a walk while striking out four over 5 1/3 innings as Amarillo rolled to a 9-0 win over Frisco on Saturday night at Dr Pepper Ballpark.

"I didn't have lights-out stuff by any means tonight, but I got the job done," he said after finishing off an eventful week.

"Those first innings have been a struggle," he said. "It was kind of an extra focus tonight to have a good first inning, and I did."

Gore had never faced a Major League All-Star before Pence stepped to the plate.

"It was definitely different. He's a big guy, too," he said. "If I make a mistake, he's gonna hit it hard."

"I executed pitches," he said, "and if I do that, I feel like I can get anybody out."

MLB.com's No. 3 overall prospect didn't allow a baserunner until Ryan Dorow singled to right on a 3-2 pitch with two outs in the third. Four pitches later, Gore picked off Dorow, who was thrown out trying to steal second. Kiner-Falefa singled to left with one out in the fourth for the other hit off the 20-year-old left-hander, who retired the RoughRiders in order in the fifth.

Gore plunked LeDarious Clark with a 2-2 pitch to lead off the sixth, then walked Dorow. He struck out Taveras before being replaced by Padres No. 5 prospect Michel Baez, who got Kiner-Falefa to line into an inning-ending double play.

"It was just kinda one of those things that happened," Gore said of the sixth inning. He was fine with Amarillo manager Phillip Wellman taking the ball with one out and telling Gore that he'd done a good job.

"We still had a lot of work to do that inning, so there wasn't a lot that needed to be said," he said.

Gore was promoted from Class A Advanced Lake Elsinore on Tuesday, two days after appearing in the Futures Game, though Gore said the Padres organization told him ahead of the announcement.

At Progressive Field, Gore had a good time with his family and hanging with some of the Minor Leagues' brightest stars and some of his teammates.

"The more experience I get before it really happens is gonna help," he said.

Gore said he went straight from Cleveland to Amarillo after the Futures Game, ready to begin life in the Texas League.

"I had to pack up stuff before I left Elsinore," he said. "There's been a lot going on the last week."