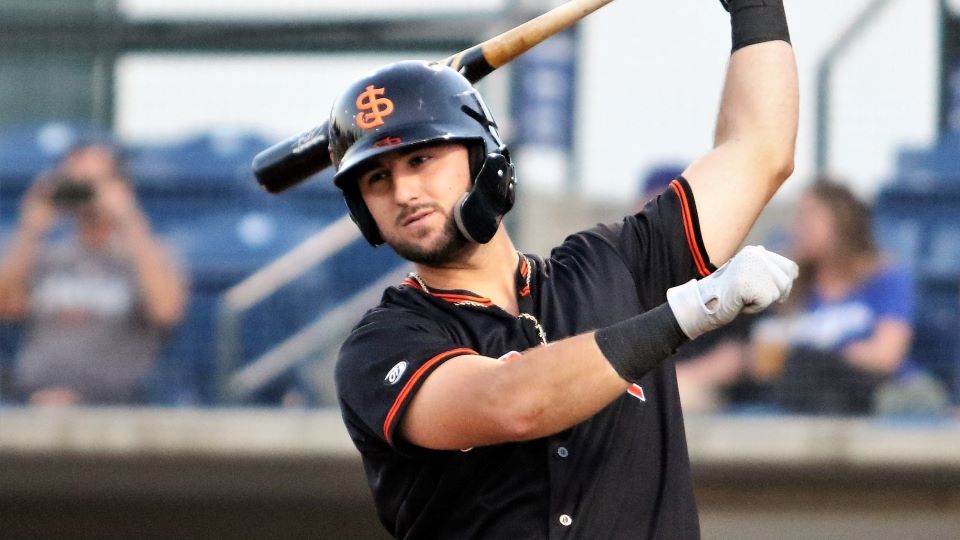 Joey Bart is hitting .257 with three homers and 11 RBIs in 17 games since the California League All-Star break. (Jerry Espinoza/MiLB.com)

In the same week he represented the National League at the Futures Game, the top Giants prospect recorded his first career four-hit game and fell a triple shy of the cycle as Class A Advanced San Jose rolled to a 17-5 romp over Lancaster on Saturday night at The Hangar.

Batting third, MLB.com's 19th overall prospect jump-started his night with a first-pitch single off left-hander and Rockies No. 3 prospect Ryan Rolison. After flying out in the third inning, Bart came back with a vengeance in the fifth, launching a two-run blast to cap San Jose's seven-run outburst. Giants No. 2 prospect Heliot Ramos delivered an RBI double and Bart took a pitch from Robert Tyler before barreling the righty's next offering to the opposite field for his seventh big fly of the season and first since June 30.

The 2018 first-round pick was far from done. In the seventh, he grounded a base hit up the middle and came around to score on Manuel Geraldo's two-run single. An inning later, he belted a two-out double to right.

Bart missed six weeks with a fractured hand earlier this season but was named a California League midseason All-Star and came off the bench at the Futures Game on Sunday in Cleveland. Overall, he's hitting .252/.302/.450 with seven homers and 24 RBIs in 38 games.

Still, the injury has impacted the top-ranked catching prospect since his return to the diamond.

"Some days are good, some days are bad," Bart told San Francisco Chronicle reporter Pat McManamon earlier this week. "With the injury, sometimes you're feeling it, you're seeing it [the ball]. Other days, it's been really a lot tougher. I've hit a few home runs, but I think things are about to get going here soon.

"I'm getting the strength back in my hand. I feel good, having a great time playing. Always do, but really enjoying coming to the yard every day and pushing myself."

Giants No. 14 prospect Sandro Fabian launched a solo homer and drove in four runs as part of a three-hit night for San Jose. Twelfth-ranked Heath Quinn ripped his first homer of the season in the second inning, while Logan Baldwin belted a two-run blast in the sixth.

For the JetHawks, Rockies No. 8 prospect Ryan Vilade went 2-for-5 with an RBI and Austin Bernard drove in two runs.