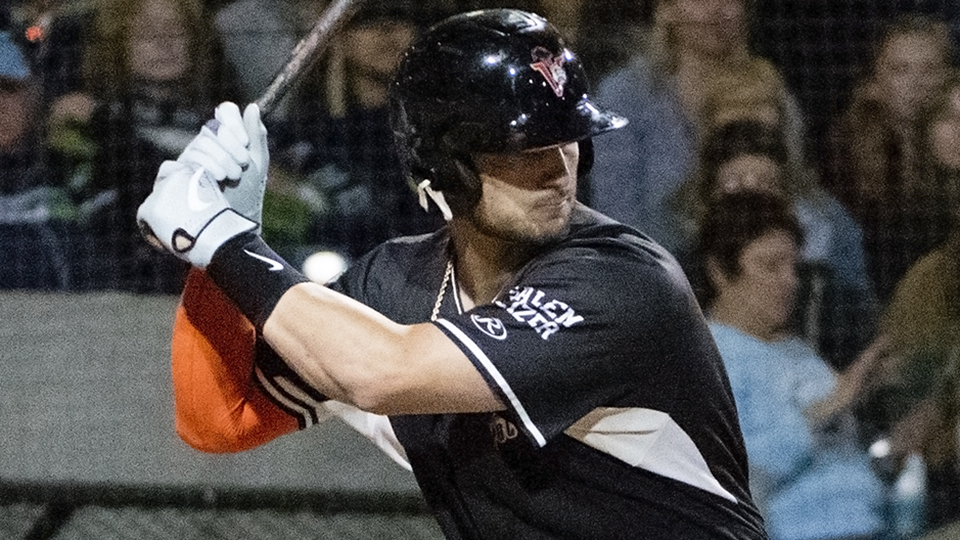 Toward the end of what a quiet afternoon game at Scottsdale Stadium, Joey Bart helped the action perk up very quickly in a nine-run eighth inning.

The top Giants prospect began the frame with a double and later hit the middle shot of back-to-back-to-back homers to close out a 15-2 drubbing of the Royals on Wednesday. Bart's homer, his first of the spring, came between dingers by Giants No. 11 prospect Chris Shaw and first baseman Zach Green for the game's final runs.

MLB.com's No. 22 overall prospect grooved a pitch from right-hander Andres Machado into center field to start the eighth, and Green followed with a blooper up the middle to drive home the 6-foot-3, 220-pound backstop. Bart went to center again for his homer later in the frame off right-hander Yunior Marte.

Bart, the No. 2 overall selection in last year's Draft, struck out in his first at-bat against Royals No. 16 prospect Richard Lovelady to start the sixth. His two hits in the eighth brought him to 4-for-7 (.571) over three Spring appearances. He's struck out three times.

The Buford, Georgia, native had hits in his first two Cactus League appearances over the weekend. Bart put together arguably the most impressive season of all of last year's draftees, batting .294/.364/.588 with 13 homers and 40 RBIs over 51 games in the Rookie-level Arizona League and Class A Short Season Salem-Keizer.

Shaw, a fifth-year pro who made his big league debut last season, also went to center on his long ball, a two-run shot that followed Breyvic Valera's two-RBI triple. Second-ranked Giants prospect Heliot Ramos and No. 17 Abiatal Avelino both went 0-for-2 with a strikeout.

Lovelady worked one inning, allowing a run on three hits with a pair of strikeouts. Royals No. 14 prospect Kelvin Gutierrez picked up an RBI on a bases loaded walk in the sixth.

After a strong Major League debut at the end of last season, Christin Stewart has picked up right where he left off. Detroit's eighth-ranked prospect went 2-for-3 with a grand slam to raise his early batting line to .556/.556/1.333 over nine plate appearances. Hitting out of the two-hole, Stewart singled to center on the first pitch he saw from Yankees No. 20 prospect Chance Adams and came around to score on Nicholas Castellanos' double one batter later. Detroit's potential starting left fielder again jumped on the first pitch in his next at-bat, taking No. 23 Yankees prospect Domingo Acevedo deep to right-center field with the bases loaded. New York's third-ranked prospect Albert Abreu allowed one hit in a scoreless second inning, and Acevedo allowed five runs on two hits and two hits in two-thirds of an inning in relief of Abreu. Top Tigers prospect Casey Mize faced one batter in the seventh, allowing a hit to Kyle Holder before rain halted play. Box score

Minnesota's No. 5 prospect Brent Rooker blasted his first homer of the spring -- a two-run shot in the seventh -- to give the Twins the edge before the rains came to Clearwater. No. 26 prospect Luke Raley continued his hot Grapefruit League hitting by singling and scoring to raise his average to .600. Second-ranked Alex Kirilloff singled in his lone at-bat. The Twins got solid pitching from prospects as well -- No. 11 Stephen Gonsalves got the start, allowing one run on three hits over two innings before Lewis Thorpe (No. 8) yielded an unearned run and fanned two in the sixth. Ranger Suarez and Cole Irvin fared worse for the Phillies, each allowing two earned runs over two innings. Box score

Baltimore's No. 15 prospect Richie Martin went 2-for-2 with a walk in his three plate appearances, scoring three runs and plating two with a fifth-inning double to center. No. 16 prospect D.J. Stewart went 1-for-2 with a double. No. 18 Dillon Tate allowed two runs on three hits with one walk and one strikeout over two innings to earn the save, and 22nd-ranked Branden Kline struck out two and walked one in a scoreless frame. Top Red Sox prospect Michael Chavis hit a three-run homer to left in the fourth, his third long ball of Spring Training, and third-ranked Bobby Dalbec went 2-for-3 with a run scored. No. 4 Darwinzon Hernandez allowed two hits and one walk while striking out three in two innings of relief. Box score

After hitting 27 homers across three Minor League levels last year, Nate Lowe clubbed his first long ball of the spring, a solo shot, in Tampa Bay's win at Port Charlotte. For the Red Sox split squad, Josh Ockimey (Boston's No. 25 prospect) went 1-for-4 and C.J. Chatham (No. 9) was 1-for-3 with an RBI. No. 17 Travis Lakins tossed two scoreless innings for Boston, allowing one hit and one walk while fanning one. Box score

Atlanta's No. 2 prospect Kyle Wright started and struck out three over two innings as Atlanta held St. Louis to four hits in a shutout at Roger Dean Stadium. Wright, in his first start of the spring, allowed two hits and did not walk a batter. Kolby Allard added two scoreless innings while Joey Wentz, Kyle Muller and Tucker Davidson contributed scoreless frames. Cardinals No. 4 prospect Dakota Hudson struck out one and worked around a hit in two innings. Box score

Miami's No. 7 prospect Isan Diaz went 1-for-4 with a homer in a loss to New York in Port St. Lucie. Diaz started at second and hit third for the Marlins, while No. 27 Austin Dean went 1-for-2 with an RBI. Right-hander Jordan Yamamoto (No. 18) struck out two in a pair of innings out of the bullpen. Gavin Cecchini, the Mets' No. 20 prospect, went 1-for-2 with two runs scored in the win. Box score

Toronto's No. 29 prospect Rowdy Tellez and No. 21 Jonathan Davis singled in the victory over Pittsburgh. Thomas Pannone, the Jays' No. 27 prospect, struck out one in a scoreless fifth before No. 28 Elvis Luciano fanned two in the eighth. Lolo Sanchez (No. 17) went 2-for-2 for the Pirates and Jason Martin (No. 11) homered in the first. Box score

No. 2 Washington prospect Carter Kieboom boosted his average to .600 in spring play with a single in his lone at-bat as the Nationals thumped the visiting Astros. Top prospect Victor Robles went 0-for-2, but stole a base and drove in a run. Top Astros prospect Kyle Tucker went 1-for-3 with an RBI double while teammate Ronnie Dawson singled twice and drove in a pair of runs. Houston's No. 10 prospect Bryan Abreu walked three of the four batters he faced in the fourth, all of whom scored. Box score

With San Diego down to its last out, baseball's No. 2 prospect struck again. Facing Troy Scribner in the ninth, Fernando Tatis Jr. crushed a line drive to left that cleared the wall for a solo home run. It was the shortstop's second long ball in as many days. Ty France doubled and scored a run in the eighth. Arizona's No. 10 prospect Taylor Clarke got the start, allowing two hits while fanning two over two scoreless frames. Fourth-ranked Daulton Varsho and No. 26 Domingo Leyba each drew a walk for the D-backs. Box score

Milwaukee's No. 2 prospect Corey Ray clubbed his second homer of the spring in the third off Cleveland right-hander Alex Wilson. The 2016 first-round Draft pick, who broke out in the power department with Double-A Biloxi last season with a career-high 27 homers, sent an 0-1 offering over the right-field wall. Ray walked in his second at-bat. No. 11 prospect Trey Supak struggled during his lone inning on the mound despite recording two punchouts. He surrendered three earned runs on three hits -- two of which were homers. Box score

Following a shaky first appearance this spring, top-ranked A's prospect Jesus Luzardo bounced back in a big way in his second outing. The No. 12 overall prospect delivered two hitless innings with three strikeouts and without issuing any walks. Los Angeles' No. 11 prospect DJ Peters reached on an error, the only baserunner against Luzardo. Peters added an insurance run in the ninth with a sacrifice fly. Top Dodgers prospect Alex Verdugo notched singles in the first two innings and scored a run. No. 27 Cristian Santana doubled and came around to score, while ninth-ranked A's prospect Sheldon Neuse singled in his final at-bat of the day. Box score

Chicago's No. 25 prospect Mark Zagunis went 2-for-3 with a two-run homer to center in the fifth and an RBI single through the right side in the first. No. 10 prospect Oscar De La Cruz allowed two runs on three hits and struck out one in 1 1/3 innings out of the bullpen, and 28th-ranked Dillon Maples struck out two in a perfect sixth. Box score

With the opportunity to perhaps break camp with the big club, top Reds prospect Nick Senzel has been seeing time in center field. The sixth-ranked overall prospect made a running catch on the warning track in right-center on a ball hit by top White Sox prospect Eloy Jimenez, who finished 0-for-3. At the dish, Senzel went 3-for-3 with a double, one RBI and a run scored. Tyler Stephenson (No. 6) added a single and Alfredo Rodriguez (No. 19) singled, walked and scored once. Catcher Zack Collins, who ended last season as Chicago's eighth-ranked prospect, plated a run with a single in the seventh. Box score

Eighth-ranked Los Angeles prospect Matt Thaiss provided a spark with the bat, going 2-for-2 with a triple, a single, two RBIs and two runs. He provided the big blow in the third with a three-bagger to right. Angels No. 3 prospect Brandon Marsh collected an RBI single in the sixth and also drew a walk. Jose Rojas doubled twice, walked and scored twice while Luis Rengifo added a sacrifice fly. Griffin Canning (No. 2), Jose Suarez (No. 5) and Ty Buttrey (No. 14) tossed a scoreless inning apiece for Los Angeles. Top Rockies prospect Brendan Rodgers legged out an RBI infield single in the ninth. Garrett Hampson (No. 3) added a walk for Colorado. No. 20 Jesus Tinoco worked around a hit and walk in a scoreless eighth. Box score

Cleveland's No. 19 prospect Oscar Mercado put his 60-grade speed on display in the sixth when he lined a hit to left and raced into third with an RBI triple. No. 11 Yu Chang collected his second double of the spring after lacing a hit to left in pinch-hit duty. For Seattle, seventh-ranked Kyle Lewis doubled in the second inning, scoring when No. 12 Shed Long was hit by a pitch. No. 27 Gerson Bautista fanned one and walked one in a scoreless inning. No. 17 Matt Festa yielded three runs on three hits and two walks in one inning. Box score