Top-rated Giants prospect had been sidelined since April 16 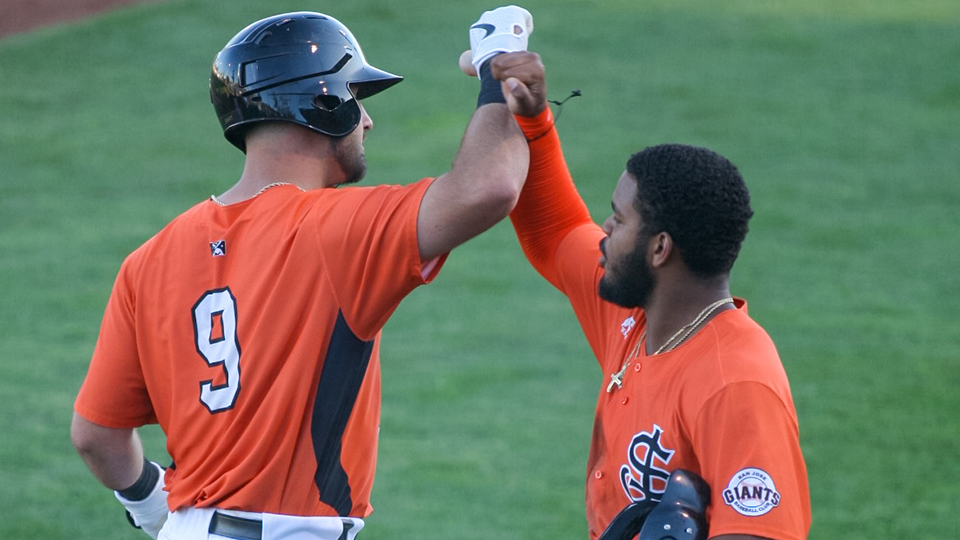 Joey Bart came back with a bang Tuesday.

San Francisco's top prospect went 2-for-3 and belted a two-run homer in his first game off the injured list as Class A Advanced San Jose defeated Modesto, 9-4, at Excite Ballpark. He missed 45 games with a fractured hand after being hit by a pitch in an April 15 game.

Bart lined to second base in his first trip to the plate, then stepped in again in the third after second-ranked Heliot Ramos doubled to right field to plate John Riley and Bryce Johnson and put the Giants ahead, 2-1. The 22-year-old quickly added on to the lead, rocketing the first pitch he saw from right-hander Austin Hutchison over the fence in left for his third homer of the season and first since April 11.

Ramos doubled to right off Hutchison with two outs in the fifth and raced home on Bart's single to center. Bart advanced to second on a throwing error by center fielder and Jarred Kelenic, the Mariners No. 2 prospect, and came home two pitches later when Courtney Hawkins took Hutchison deep to left-center.

While a fracture to his non-throwing hand wasn't devastating, Bart acknowledged last week that the road to recovery still was not easy.

"It's been a little bit of a lengthy process. It wasn't a very bad fracture, but it was tough," Bart told NBC Sports Bay Area on May 29. "I didn't want to give in too early. The last couple of weeks, it's been a lot better compared to the first few weeks."

After the Giants drafted him second overall last year out of Georgia Tech, the 6-foot-2, 235-pound backstop hit .261 in six games in the Rookie-level Arizona League before joining Class A Short Season Salem-Keizer. In 45 Northwest League games, Bart batted .298/.369/.613 while crushing 13 homers and driving in 40 runs.

Ramos finished 4-for-4 with two doubles, two RBIs and three runs scored. He's hitting .462 (12-for-26) in seven games since returning from a sprained knee ligament on May 27.

San Jose starter Aaron Phillips (4-4) got the win after allowing two runs -- one earned -- on five hits with three strikeouts over 5 2/3 innings. His ERA on the year is 4.01 through 11 starts with the Giants.

Kelenic was 2-for-4 and scored three times, while Jack Larsen doubled, singled and drove in three runs for the Nuts.