Giants No. 18 prospect rounding out arsenal with Augusta 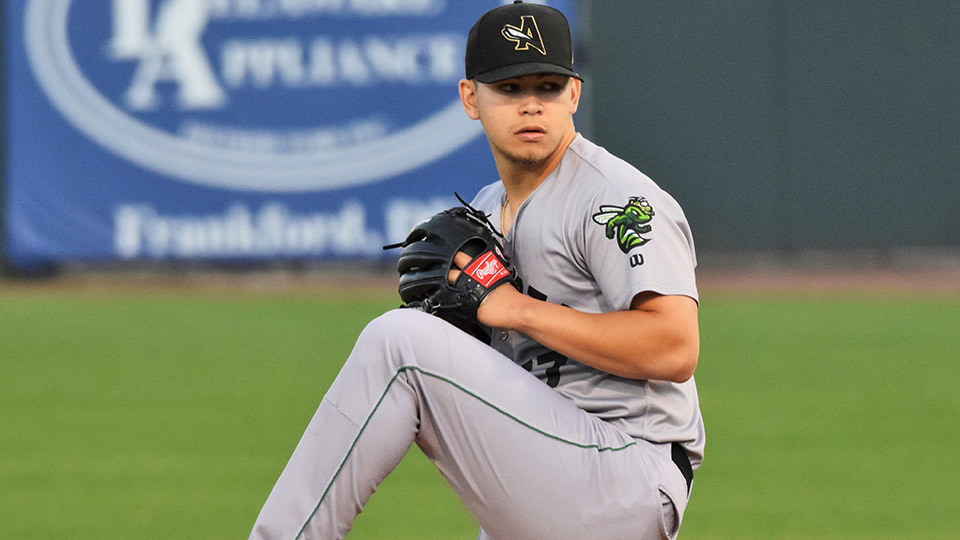 A fourth-round pick in 2018, Blake Rivera has struck out 63 batters while allowing 39 hits in 49 2/3 innings this season. (Augusta GreenJackets)

For as long as he can remember, Blake Rivera has wanted nothing more than to pitch in professional baseball. Yet when he received his first opportunity, the right-hander decided to bet on himself instead.

After a solid freshman season in which he went 7-1 with a 1.94 ERA at Wallace State Community College in Hanceville, Alabama, Rivera was drafted by San Francisco in the 32nd round in 2017. While the Giants offered a chance to begin working his way to his ultimate goal of pitching in the Major Leagues, Rivera believed he had more to offer an organization than what he had shown to that point.

"After my freshman year, the scouting reports said I was going to be a reliever, a fastball-curveball power guy," Rivera said. "So I went into my sophomore year by working harder than I ever have in my life. I worked hard on my changeup. I made it an average pitch for me, and I'm trying to make it an above-average pitch to this day. That helped me out a lot, as did honing my command and throwing more strikes. My stuff got a little bit better and the scouts started coming back around."

Undrafted out of high school in Smiths Station, Alabama, after an injury derailed his senior season, Rivera had a few mid-major Division I offers and several scholarship opportunities with junior college programs. The coaching staff at Wallace State showed the most interest, which made Rivera feel like the school was the right fit. That scenario unfolded throughout his freshman year as well as his sophomore campaign, when he went 10-0 with a 1.75 ERA and earned Second Team NJCAA All-America recognition.

As a result, the Giants came calling again in 2018, drafting Rivera in the fourth round. He became the second-highest player ever drafted out of Wallace State, following in the footsteps of Craig Kimbrel, Atlanta's third-round selection in 2008 after going in the 33rd round as a freshman.

Rivera admits he was raw prior to signing with San Francisco and feels he is beginning to add to the Giants' reputation as an organization that has success developing pitchers. He credits Augusta pitching coach Clay Rapada for helping him fine-tune several aspects of his game.

"I'm starting to learn a lot about how to take care of my body and how to develop into the pitcher I'm trying to become," Rivera said. "When I got drafted, I heard about how the Giants do a really good job of developing pitchers, and that's been true based on everything I've seen. I feel a lot more comfortable about myself and feel like I've started to grow as a pitcher. I feel a lot better when I'm on the mound and feel confident that I can get guys out."

Rivera threw only 19 innings at Salem-Keizer in his pro debut last summer prior to putting together a solid showing in Spring Training. After 10 starts this season at Augusta, he's 3-4 with a 3.62 ERA and 63 strikeouts while allowing only 39 hits in his initial 49 2/3 innings -- including a hitless effort in his second start and a career-high 10-K start Thursday. Rivera also has walked 27 batters, however, a statistic that needs to improve as he continues to harness his 93-95 mph fastball, power curve and developing changeup.

"The main thing I'm working on is my command, just going out there and believing in myself and throwing strikes," Rivera said, ranked as the Giants' No. 18 prospect. "I'm working on getting ahead in the count and getting guys out with my off-speed stuff. I believe my secondary stuff is good enough to get guys out, especially when I'm ahead in the count.

"This is a dream come true for me. I've worked for a long time for this and it all paid off. I'm just going to see where it takes me from here. I'm going to keep working until I can't anymore."

Gone streaking: Ian Dawkins of Kannapolis stroked two singles in four at-bats against Delmarva on June 5 to extend his hitting streak to 20 games, the longest this season in the SAL. On the previous night, the center fielder and leadoff hitter tied Hagerstown's Gilbert Lara for what was the loop's longest streak in 2019 at 19 games. A product of Sacramento State, Dawkins is 30-for-81 (.370) with eight doubles, one triple, one homer, six RBIs and 15 runs scored during his hot streak, which began on May 18.

Four horsemen and the rest: Only four of the SAL's 14 teams were above the .500 mark through games of June 6. At 44-14, Delmarva has run away with the Northern Division despite strong first-half showings by Greensboro (38-20) and Hickory (37-22). In the Southern Division, Charleston is the only team above the break-even mark at 32-27. The RiverDogs separated themselves from the pack by going 15-5 from April 25-May 16 but are 7-10 since to hold a modest 2 1/2-game advantage over second-place Lexington (29-29).

Close but no cigar: West Virginia starting pitcher Clay Chandler retired the first nine Hickory batters he faced on June 4 and tossed a career-best 8 1/3 innings to improve to 6-2 on the season in the Power's 4-2 victory over the Crawdads. The right-hander from Southeast Missouri State and an SAL All-Star selection had a shutout after retiring the first batter of the ninth but was removed upon surrendering a one-out double and homer. He finished the game having allowed two earned runs and six hits with five strikeouts in his seventh quality start of 2019.

Bill Ballew is a contributor to MiLB.com. This story was not subject to the approval of the National Association of Professional Baseball Leagues or its clubs.