San Jose a winner in Class A Advanced

Giants' 90-win season a success despite lack of league title 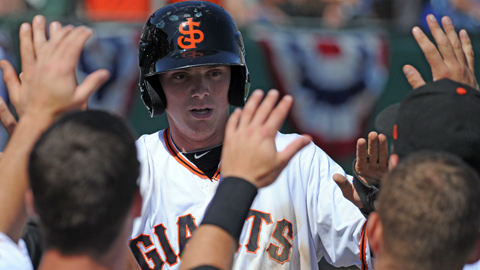 What did the San Antonio Missions and the San Jose Giants have in common in 2011? The Missions (94-46) and the Giants (90-50) accomplished what 118 other full-season Minor League clubs could not. They reached the 90-win plateau.

Where do San Antonio and San Jose diverge? The latter secured a Texas League championship at Double-A and the former fell short of its third consecutive Cal League crown. That said, don't consider the Giants -- awarded the MiLBY for Best Class A Advanced Team -- completely bummed out.

"One of the things, as an organization, we pride ourselves on is [that] a winning atmosphere and playing to win a championship helps develop players better," said manager Andy Skeels, who guided San Jose to a title in 2009 before leading Double-A Richmond in 2010. "All our players would [say] maybe if we weren't so banged up at the end, maybe we would have given a better run. The club that I had this year was made up of such great competitors, and a lot of them think we may have it slip through our fingers. When the [Seattle] Mariners won 117 games, I am sure they felt the same way."

Though their short-lived stay in the postseason is difficult to explain, the Giants' regular season is not. Success started on the mound. San Jose hurlers combined on a 3.70 ERA, 14 shutouts and 48 saves -- all tops among their Cal League peers. Moreover, the shutouts were tied by only the Florida State League's St. Lucie and Jupiter staffs, and the saves went unmatched in the Class A Advanced ranks.

"In A-ball, anytime you can get guys at top of rotation [that] throw strikes and have strong defense behind them, [that] don't walk guys -- this is especially true in A-ball -- and make them swing the bat, it gives you a lot of confidence," Skeels said, "that you're not going to have too many long losing streaks."

In fact, the club finished May with a 12-game winning streak before adding stretches of 12 straight victories in June and 11 consecutive in July. It also became the first to clinch a first-half division title on June 9, even beating San Antonio to punch. (The Missions clinched their division three days later.)

"It was fun because me and Craig are real good friends. Any time that we were pitching, we were always rooting the other one on. And we also had Kelvin Marte. We all competed against each other," said Heston, who led the trio with 131 strikeouts in 151 innings. "Anytime everybody is pitching well, you want to go out there and do better; that's healthy competition. You go out there and you want to do a little better than the last guy.

The most important batters also happened to share the closest relationship with the pitchers. Catchers Hector Sanchez (.302 batting averaged with 58 RBIs in 52 games) and Tommy Joseph (22 homers and 95 RBIs in 127 games) "both have now played their way into being [among the] elite catching prospects in the game," gushed Skeels.

"He's something to watch play, and I got to see it firsthand," Heston said. "He set the tone for what we did."

Beyond the numbers, San Jose was also flush with intangibles, chief among them toughness and togetherness. Skeels pointed to a May 16 home game opposing Stockton. The Giants coughed up an early four-run lead, then responded to single runs by the Ports in the 11th and 13th innings. Finally, after the visitor posted three runs in the top of the 18th, San Jose scratched out four to win, 10-9.

"It was a death march to the end for both clubs," Skeels recalled. "In extra innings, we rally to win the game. That spoke to the heart of a lot our players; it was a great touchstone for us. These kids, individually and collectively, were gamers."

Off of the ballfield -- in the clubhouse and the hotel as well as on the bus -- players said they were tightly knit despite losing shortstop Brandon Crawford (.322 average in 14 games) in May and Sanchez, third baseman Chris Dominguez (11 homers and 40 RBIs in 63 games) as well as outfielders Francisco Peguero (.324 average in 16 games) and Wendell Fairley in June -- all to promotions within the organization.

"We lost a good core of our group" at the end of the first half, Brown said. "It took a few games for everyone to find their new role. Once we did in the second half, we got off running again.

"It was chemistry. We really had a good core of guys. We got to know each other really well. It was a lot of fun in the clubhouse."

Infamous for pulling pranks, Brown also kept the team loose. Was there a particularly good joke played on a teammate?

"Now that everybody is back home and sitting at home," added Heston, "you realize how those days that were long and hard were actually a lot of fun."

For whatever reason, the season didn't end the same way. The Giants lost their final three games to Rancho Cucamonga, then, after a first-round bye in the playoffs, lost three of four to the Stockton Ports.

"It was a little disappointing, but as I have learned from past playoffs, in college and this [year] included, it's about getting hot at the right time," said Brown, a Cal State-Fullerton product. "Stockton was hot, and we lost to a hot team.

"We had a good season, so we can't forget about the journey that got us there."