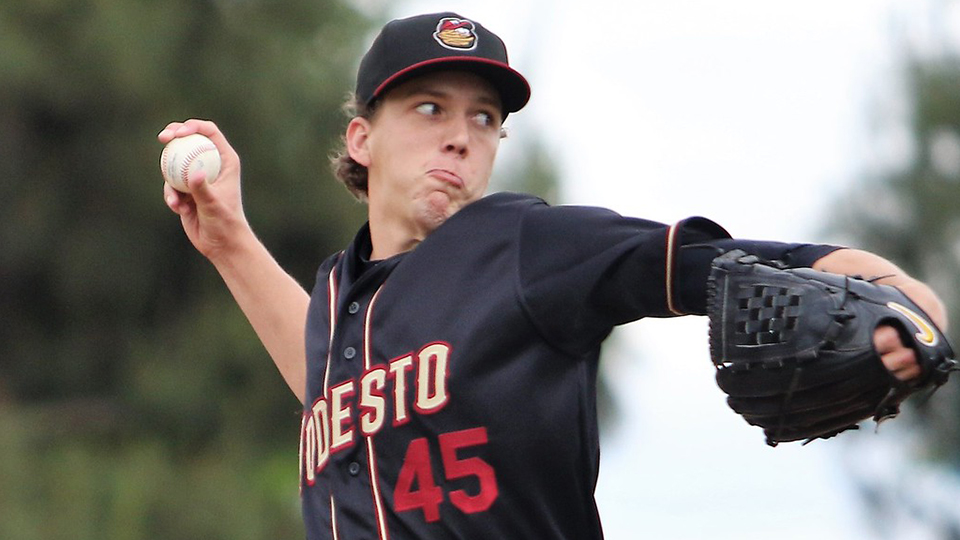 Logan Gilbert has produced just a 0.93 WHIP over 85 innings across two levels this season. (Jerry Espinoza/MiLB.com)

Even the California League couldn't challenge Logan Gilbert enough to keep him, and now, the 22-year-old right-hander is on the move once again.

The Mariners promoted MLB.com's No. 68 overall prospect from Class A Advanced Modesto to Double-A Arkansas on Monday, marking Gilbert's second promotion of his first full season.

The 6-foot-6 hurler began the season at Class A West Virginia, where he posted a 1.59 ERA and 0.66 WHIP with 36 strikeouts in 22 2/3 innings before moving up to Modesto on May 1. His combined 1.69 ERA is fourth-best among Minor League pitchers with at least 70 innings thrown this season while his 33.4 percent K rate ranks 12th in that group of 421.

Taken last year out of Stetson University, Gilbert was initially on a relatively slow track for a collegiate first-round pitcher, but he's now moving ahead of the curve with this jump to Double-A two months after his 22nd birthday. The righty can throw in the low-to-mid-90s and has touched the upper-90s with his heater. His slider and changeup can be above-average pitches as well, and he possesses an average curve to round out a four-pitch mix. He has shown impressive control, with a 5.5 percent walk rate through the first three months of the 2019 season.

Gilbert's promotion comes on the same day No. 13 Mariners prospect Cal Raleigh is also making the jump to Arkansas after winning three straight Cal League Player of the Week awards. Gilbert's move also gives the Travelers five of the top seven prospects from an ascendant Mariners system. He joins No. 2 Justin Dunn, No. 4 Justus Sheffield, No. 5 Evan White and No. 7 Kyle Lewis on the roster.