On opening night at MGM Park, Biloxi rallies for walk-off win in 14th 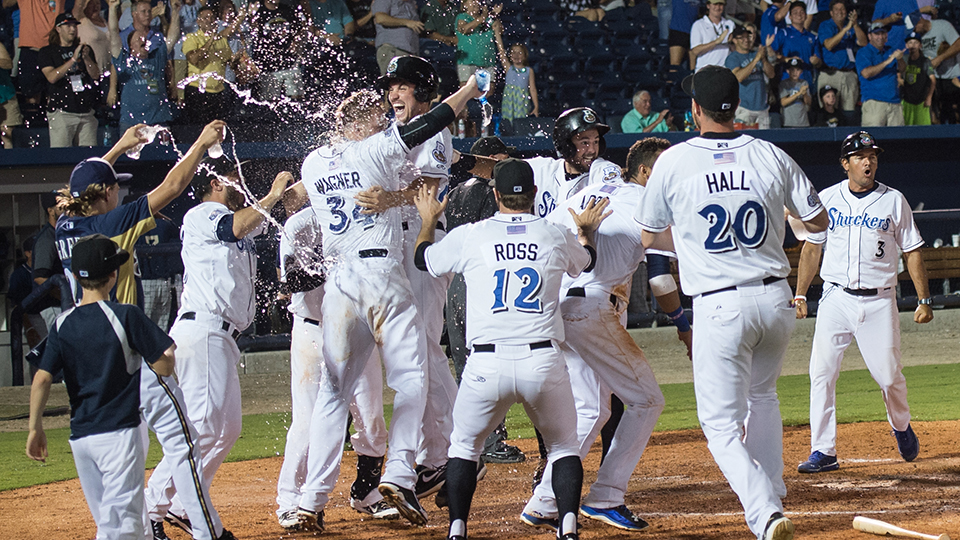 Most of the sellout crowd of 5,095 hung around to watch the Shuckers score twice in the 14th inning. (Biloxi Shuckers)

After a 54-game road trip to open the season, the Biloxi Shuckers were ready to come home. And they could not have scripted a better christening for their new digs.

In the first-ever game at Biloxi's MGM Park, the Shuckers fell behind in the 14th inning before rallying for a 5-4 win over the Mobile BayBears as Nick Shaw delivered a walk-off single.

In front of a sellout crowd of 5,095, many of whom stuck around until the end, Biloxi battled back after squandering a 3-2 lead in the ninth and allowing Mobile to go ahead, 4-3, in the top of the 14th.

"Those fans really made it exciting," Shuckers manager Carlos Subero said. "There was just a great vibe and a great energy. It wasn't about the numbers, they were excited. Their identity is with this team."

The crowd, which included Mississippi Gov. Phil Bryant and Biloxi Mayor Andrew "FoFo" Gilich, had seen its team exiled for two months. Even after striking a deal with the city to move up the completion date for MGM Park, the Shuckers became Southern League vagabonds, playing all of their games on the road or in their former home, Huntsville, Alabama.

Despite the grueling travel schedule, Subero said his team never let it affect its play.

"It didn't have an effect, and that was the great thing about it," he said. "We said we were not going to use the situation of playing a 54-game road trip as an excuse. They were right on it. There was not a time when our guys let down. That's a tribute to the character they have."

In fact, the Shuckers returned home with the Southern League's best record.

"I think we felt excitement more than pressure," Subero said. "Normally, you're in the middle of the season with about 60 games left, you're playing a team in third place and you want to focus on winning one game at a time. But they were more excited to bring Biloxi Shuckers baseball back to these fans."

The fans' excitement grew as the game wore on, leading to some fun interaction between them and the team.

"We were like, 'You guys wanted baseball? Let's see how resilient you are in game one,'" Subero said. "The number of fans that stayed 14 innings late and tomorrow's Sunday ... this is just the beginning."

Wow what a way to break in the new stadium @BiloxiShuckers thank you to everyone that came out. The atmosphere was unreal! #biloxishuckers

"Tonight was a perfect script," Subero said. "To me, it's like a soap opera. There's a lot of drama but a great ending."

The first plot twist came when the BayBears tied it in the ninth on Mitch Haniger's RBI single off Mike Strong.

The Shuckers had a chance to end it in the bottom of the inning when Michael Reed walked and stole second with two outs, but Nathan Orf flied out. They threatened again the 11th when Kyle Wren, the Brewers' 17th-ranked prospect, stole third during an intentional walk with one out. But Ramirez and Michael Reed struck out.

After Mobile took the lead on another RBI single by Haniger, the stage was set for the dramatic finish as back-to-back singles by pinch-hitter Parker Berberet and Shaw triggered the celebration.

"You play a 14-inning game," Subero said of the game he jokingly called the longest in MGM Park history, "and you not only come back, but you get a walkoff win? What more can you ask for a crowd that's been waiting so long for baseball?"

Alex Kraft is a contributor to MiLB.com. This story was not subject to the approval of the National Association of Professional Baseball Leagues or its clubs.