Sounds and Express to #BattleForTheBoot as Honky Tonks and Dance Halls 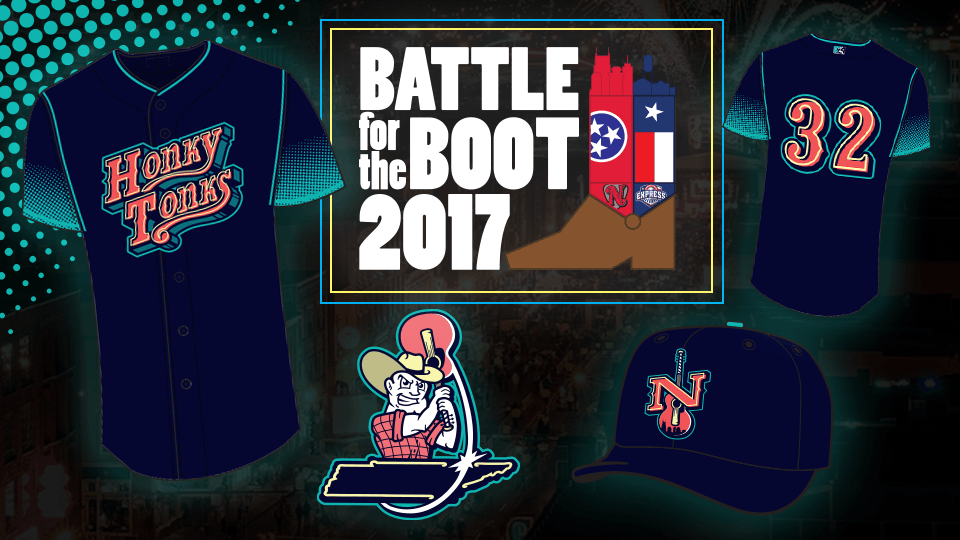 The Nashville Sounds and Round Rock Express have announced a two-game home-and-home series to #BattleForTheBoot during the 2017 season.

"Becoming the Honky Tonks for two nights during the 2017 season is a great way to represent Nashville as the real Music City," said Sounds General Manager Adam Nuse. "The Express won the division in 2015, the Sounds won it 2016, and we're confident the Honky Tonks will win the Battle for the Boot and help us repeat as division champs this year."

Nashville's specialty jerseys feature a navy blue front with neon blue gradient sleeves. Scrolling across the chest is "Honky Tonks" in neon red with electric yellow trim. Included on the sleeve is a man with a cowboy hat and guitar on top of the state of Tennessee.

Along with the unique jerseys describing the famous Honky Tonks in Music City, the Sounds will also sport new hats. The navy blue cap features a neon red "N" with a guitar that features the Nashville skyline.

The winner of the #BattleForTheBoot trophy will be determined by the play on the field in the two-game series. If a team sweeps the series, they're crowned the winner. If the two teams split the series, a social media vote through Twitter will decide the contest.

The 2017 season will be the Sounds' 40th in franchise history and their third as the Oakland Athletics' top affiliate. Opening Day is scheduled for Tuesday, April 11 as the Sounds host the Oklahoma City Dodgers at 6:35 p.m. at First Tennessee Park. Season ticket memberships are available now by calling (615) 690-4487 or by visiting www.nashvillesounds.com.