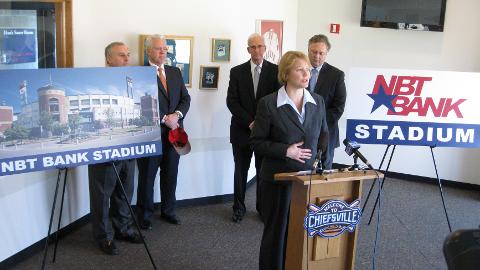 "Our community is grateful to NBT Bank for continuing the commitment made originally by Alliance Bank to support our stadium and professional baseball in Onondaga County," said County Executive Joanie Mahoney. "I am also pleased to officially welcome NBT Bank to our community, and I look forward to working with NBT as they continue the proud legacy of community support established by Alliance Bank."

"NBT Bank is proud to lend its name to Onondaga County's baseball stadium," said NBT Bank President and CEO Martin Dietrich. "As a community-minded bank, we strive to provide quality service to our customers and to support activities that benefit the cities and towns we call home."

NBT Bank Stadium is part of the Onondaga County Parks System and is the home of the Syracuse Chiefs, the AAA-affiliate of Major League Baseball's Washington Nationals. In addition to hosting the Syracuse Chiefs, the stadium has also entertained County residents by hosting national recording artists such as: The Dave Matthews Band, Willie Nelson, Bob Dylan and John Mellencamp.

Syracuse Chiefs Board President Bill Dutch said, "Alliance Bank and Onondaga County in addition to our parent team, the Washington Nationals have been tremendous partners for the Syracuse Chiefs. We are delighted that NBT Bank is going to continue that relationship. We have an exciting season planned at NBT Bank Stadium as we continue to enhance the entertainment experience for our fans and their families. NBT Bank Stadium will be a fun place to be in 2013, starting April 12th."