Sommerfeld's image of Everett's Perez voted Photo of the Year 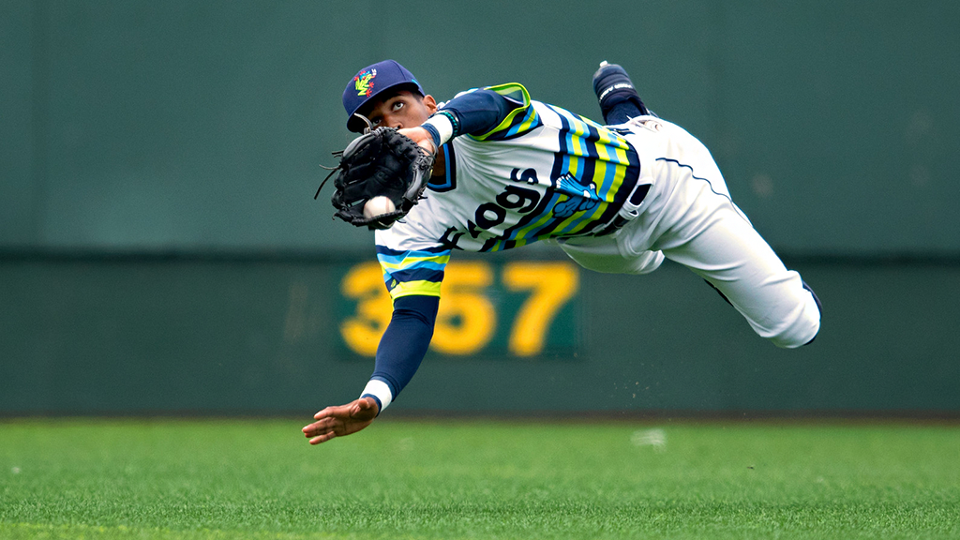 Miguel Perez kept his eyes locked on a fly ball as it hit his glove in a diving play on Aug. 11. (Shari Sommerfeld/MiLB.com)

Shari Sommerfeld turned to track a sinking fly ball to center field on Aug. 11. Through her camera, she could see Miguel Perez racing in.

The Seattle prospect playing for Class A Short Season Everett dove at the last moment, his left hand reaching for the ball. It's the classic, familiar, all-out diving effort that ends up on highlight reels or magazine covers.

"He's parallel to the ground and the ball is just hitting his glove at that peak moment," Sommerfeld said of the photo. "The timing is exciting to get."

Sommerfield, who spends her evenings as the AquaSox photographer, fired off a sequence of photos on her Canon EOS 7D Mark II camera. Perez landed face-first in the grass. Did he catch it? Did she get it?

"When I took the shots, I looked to see if I got it," Sommerfeld said, "and I was excited that I had."

The image excited fans too, earning the most votes to win the 2019 MiLBY Award for Photo of the Year. "It's pretty exciting," said Sommerfeld, who's been shooting sports for about 20 years. "I'm very honored considering how many teams there are and how many photos were submitted over the season."

Sommerfeld's photo of Perez's diving grab was one of 10 finalists for a MiLBY. Her frame garnered over 24 percent of the votes, edging John Moore's photo of Amarillo's Reggie Lawson on the mound. Alex Seder's hot air balloon photo received just a handful more votes than Jorge Salgado's lightning storm image from El Paso to finish third.

Sommerfeld, who by day is a project manager for Delta Dental of Washington, said the Everett community rallied behind her when voting began. She said everyone from longtime fans to the player and his mother encouraged others to vote.

"The host families and season-ticket holders -- I had people message me, 'I'm voting!' It was very sweet and supportive. It's a nice community of folks. Everyone is super supportive. I've been here over 20 years and they always say 'hi' on the field. When they saw I posted a link saying I was excited to be nominated, people started blasting away. 'I'm voting! I'm voting!' It was very, very nice to get that support from everyone."

Perez, who made the catch in Everett's 10-1 loss to Hillsboro, joined the AquaSox in June after spending two years with Seattle's Dominican Summer League affiliate. He posted the image on Instagram, urging his 2,200 followers to vote.

"I saw him on his Instagram post about it and his mom was super excited to vote," Sommerfeld said. "He promoted it as well, so that was pretty cool."

Sommerfeld said she appreciates the memories of photographing countless current Major Leaguers during their time developing in the Minors with the Mariners. Hearing from excited players has been a bonus.

"I love the connection with the players," she said. "I focus on getting what the team needs -- cards, the web, MiLB.com -- and I give all the images to the players. Sometimes this is going to be their only year playing professional baseball, so for them to have those photos to share with friends and family -- that's what I really enjoy, when I get a message from the Mariners players. I had Mariners first-round pick George Kirby thanking me for the pictures, and that's pretty neat."

Sommerfeld took the winning image with her Canon 400mm f/2.8 lens, a favorite of field sport photographers. She said it's tough to get images of diving catches beyond just waiting for the play to unfold.

"Gosh, it's pretty infrequent [to get one]," she said. "First of all, you have to have a diving catch opportunity and then you hope the shortstop and umpire and third baseman aren't in the way because that happens all the time -- it's hard just to have a clear shot. I was really happy about that. I love the action shots -- the diving plays, the tags at second, the collisions at home -- those are the ones that are really exciting when you anticipate and capture. To catch those peak action moments where there's really exciting things going in the game is what I like to capture the best."

You can see more of Sommerfeld's photography on Facebook.