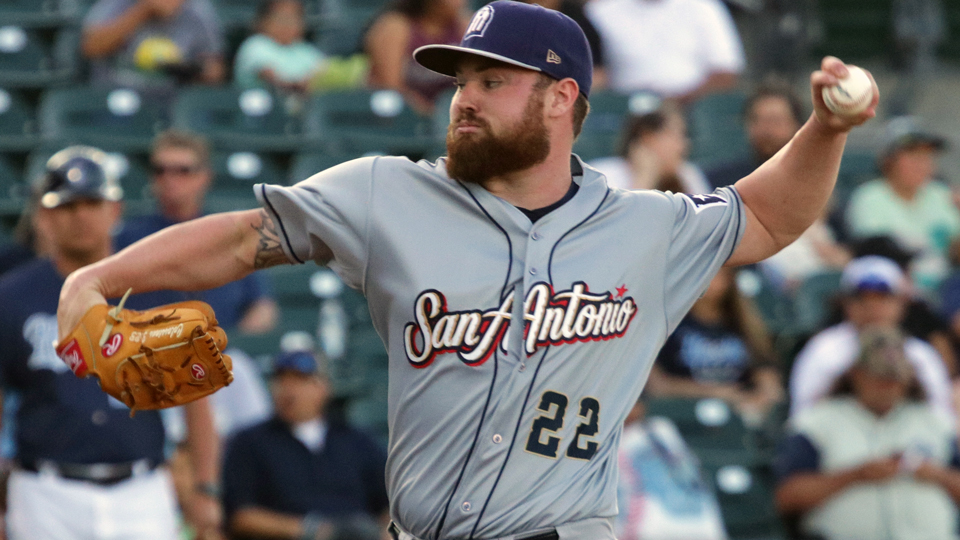 For Logan Allen, a corner turned wasn't a matter of change in mechanics or mind-set, but rather of choice.

As in, which of his four-pitch mix he chose to rely on most.

Leaning on a split-finger changeup and slider early in the season, the 21-year-old left-hander shifted to his fastball and curve not long before the All-Star break, and the results have helped catapult him to the top of most categories in the Texas League.

"I'm very comfortable with where everything is at," Allen said. "There's a lot of room to improve -- always -- but the confidence has been outstanding, especially with all four of my pitches.

"Now it's continue to pitch. Not just throw, but to pitch and be confident."

Drafted by Boston in the eighth round in 2015, Allen was acquired in a trade for reliever Craig Kimbrel that same year. He spent 2016 and 2017 working his way through the Padres' lower levels before making his Double-A debut to start this season.

After an inconsistent start -- four or more earned runs allowed in each of three starts before June -- Allen made some changes. He leaned on a curveball that had gotten better since last offseason, and he put more emphasis on his fastball.

According to Allen, his fastball can get up to 96 mph but sits around 92, and his curveball has become much more consistent since the start of the season.

"I feel like it's a really good pitch now," he said of the curve. "When I got drafted, I felt like it was a pretty good pitch, but when I got into pro ball, I thought I had to fine-tune it and it never really clicked. Now, it's much better. It's much harder. It's a tighter spin."

With a consistent fastball and curveball to go along with a changeup and slider he's always felt comfortable with, Allen is armed with a four-pitch mix, which helped him dominate through a four-start stretch earlier this year.

He gave up three runs over six innings in a July 6 loss to Northwest Arkansas, but Allen isn't worried, saying that his measure of success is based more on feel than a final line -- and lately he's been feeling pretty good.

"There's some nights when my line is really good, and sometimes I have my best stuff and results don't show," he said. "It really depends on me -- how I thought I should execute pitches, selection. As long as I do that, the line should be as good as I want it."

We'll call it even: The Arkansas Travelers and the San Antonio Mission's July 9 game was cancelled because of rain, and because it was the last scheduled meeting between the teams this season, it will not be made up. That means the all-time series between the Travelers and the Missions, which goes back to 1966, ends in a dead heat: 310-310. San Antonio's Double A franchise is moving to Amarillo for next season, while Colorado Springs of the Triple-A Pacific Coast League is moving to San Antonio.

Heck of a run: One of the Texas League's greatest streaks ended on June 29, when Corpus Christi infielder Randy Cesar went 0-for-4 against Arkansas, bringing a halt to a league-record hitting streak of 42 games. Cesar's streak broke that of Bobby Trevino, which had stood since 1969. Cesar is still leading the Texas League with a .337 average, along with nine home runs and 50 RBIs.

He has the power: Tulsa catcher and third baseman Will Smith has used the start of the Texas League's second-half to assert himself in the Texas League home run race. Smith has hit nine long balls since the start of the second half, including one in four consecutive games from July 7-11, and he has 16 for the season -- second in the league and a career-high. Tulsa's DJ Peters is the current leader with 18 home runs.

Troy Schulte is a contributor to MiLB.com. This story was not subject to the approval of the National Association of Professional Baseball Leagues or its clubs.