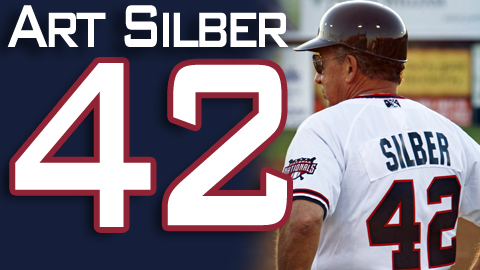 (WOODBRIDGE, VA)- Art Silber, owner of the Potomac Nationals, Minor League Affiliate of the Washington Nationals, announced today that he will no longer coach first base. Silber, 71, who is now in his 23rd season as owner and part time first base coach stated that he has "coached his last game."

He recently notified officials of Major League Baseball, Minor League Baseball and the Carolina League that he will no longer pursue his dream of being the last number 42 in professional baseball. Silber's childhood idol was the late Jackie Robinson who broke the baseball color barrier in 1947. On April 15, 1947, Silber was at Robinson's first game at Ebbets Field in Brooklyn, New York. Robinson's number was 42 and on the 50th anniversary of Jackie Robinson's first game, April 15, 1997, that number was retired for all of professional baseball, major and minor league, with the exception of grandfathering those who already wore that number. For the last few years, the only two in uniform who were permitted to wear number 42 were Silber and Mariano Rivera, the great closer for the Yankees and certain future member of baseball's Hall of Fame.

Silber, who grew up in Brooklyn, used to wait for Jackie Robinson on the corner of Sullivan Place and Bedford Avenue, half a block from the row house he lived in, from 1947 until the mid 50's.

Silber has stated that "walking with Jackie Robinson was like walking with God. I would always call him Mr. Robinson and he would say....call me Jackie, but I could never do that. He was a man of incredible character with a form of internal strength rarely seen. He stared prejudice and hatred in the eye and responded by being one of the most exciting ball players to ever wear a uniform."

Brooklyn in the late 40's was a melting pot of minorities, home to those coming back from a war, those recovering from the great depression and those like Silber whose family had been greatly affected by the Holocaust.

"Jackie Robinson inspired not only those of color, but he set an example of character and strength for all Americans. He inspired me. He set an example for excellence regardless of the obstacles you faced," Silber was quoted recently saying.

"I wore number 42 all these years just to tell our fans "why." "I could tell our players at the beginning of the season, young Little Leaguers attending one of our games or on the 50th or 60th anniversaries of his first game, who he was and what he did."

Silber had told both Major and Minor League Baseball that he would not back into the record. If for any reason, other than retirement, Mariano Rivera could not play, then he would stop as well.

Recently, Mariano Rivera was injured and his season and perhaps career has ended. Out of respect for Rivera's career, Silber will hang up his uniform, being the last number 42....in Minor League Baseball.