Been a while: Minors' longest title droughts 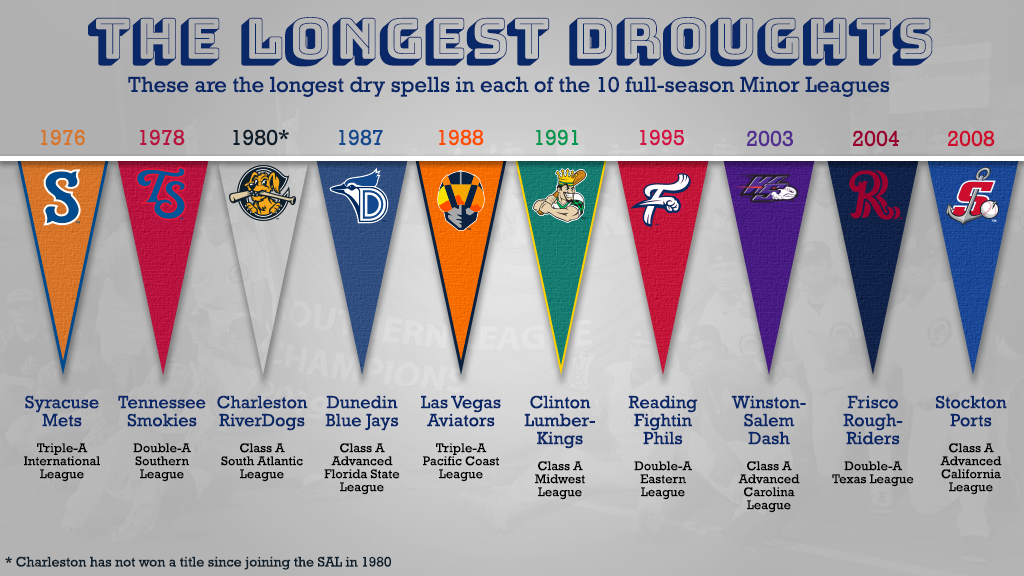 After 41 years, the curse of the alligator is no more. The Visalia Rawhide are California League champions.

Visalia last won it all in 1978, when they were known as the Oaks. Joe Charboneau, future Cleveland Indians Rookie of the Year, was one of the team's key contributors and biggest characters. His pet alligator, Chopper, died just days after the championship; according to legend, this resulted in a curse on the franchise that Visalia wasn't able to overcome until this season.

The cessation of the Rawhide's long title drought served as the impetus to revisit this 2015 article on the longest championship droughts in Minor League Baseball. It's only been four years, but much has changed. Here, we highlight the team in each of the 10 full-season leagues that has gone the longest without winning it all. In order to have qualified for this article, the team in question must have stayed in the same market and league for the duration of the drought. Also, co-championships (usually the result of bad weather forcing the cancellation of a title series) do not count as having won it all.

With all that said, let's get to it: TRIPLE-A
International League: Syracuse Mets, 1976 (as the Syracuse Chiefs)
Syracuse went through a big change over the past year, having switched its name, affiliation and ownership to the New York Mets. Nonetheless, one thing remains the same: No Minor League team has gone a longer period of time without winning it all. The last Syracuse club to do so was the 1976 Chiefs, a Yankees affiliate skippered by Bobby Cox and featuring Ron Guidry in a relief role. Following 31 seasons as a Blue Jays affiliate (1978-2008) and an additional 10 with the Nationals (2009-18), Syracuse played its first season as the Mets in 2019. They missed the playoffs in heartbreaking fashion, losing a divisional tiebreaker game to Scranton/Wilkes-Barre, 14-13.
IL teams still waiting to win it all: Lehigh Valley IronPigs (established 2007); Gwinnett Stripers (established 2009). Pacific Coast League: Las Vegas Aviators, 1988 (as the Las Vegas Stars)
Like Syracuse, Las Vegas went through a big change in 2019. Last offseason, the franchise relocated from Cashman Field to brand-new Las Vegas Ballpark, changed its name from the 51s to the Aviators and changed affiliations from the New York Mets to the Oakland Athletics. But to find the last time Las Vegas won a championship, one has to go back to an era of the team that predates the 51s. The 1988 Stars, a San Diego affiliate, won it all with a roster that included both Alomar brothers as well as Bruce Bochy. Subsequent affiliations with the Los Angeles Dodgers, Toronto Blue Jays and Mets all came up short. This season, the A's-affiliated Aviators won the PCL's Pacific Southern Division but got bounced in the semifinals by the eventual champion Sacramento River Cats.
PCL teams still waiting to win it all: Salt Lake Bees (established 1994); Albuquerque Isotopes (established 2003); Iowa Cubs (last championship was in 1993 as member of now-defunct American Association); Oklahoma City Dodgers (last crown was in 1996 in the AA); Round Rock Express (no championships since switching to the PCL from the Double-A Texas League in 2005); San Antonio Missions (switched to PCL from Texas League in 2019). DOUBLE-A
Eastern League: Reading Fightin' Phils, 1995 (as Reading Phillies)
Reading has been a model of consistency in the Eastern League. The organization has been a Philadelphia Phillies affiliate since 1967, all while playing at First Energy Stadium (which opened as Reading Municipal Memorial Stadium in 1951). Unfortunately for Reading's phervent phanbase, the team also has been a model of consistency when it comes to not winning a title. It last did so in 1995, with a squad that featured Scott Rolen as well as, for five games, 42-year-old Larry Andersen. The R-Phils were declared co-champions alongside the New Britain Rock Cats in 2001, as the Eastern League Finals were canceled due to the tragic events of Sept. 11.
EL teams still waiting to win it all: Erie SeaWolves (established 1999), Richmond Flying Squirrels (established 2010); Hartford Yard Goats (established 2017). Southern League: Tennessee Smokies, 1978 (as the Knoxville Sox)
In 1972, after a four-year hiatus, Southern League baseball returned to Knoxville in the form of the Chicago White Sox-affiliated Knoxville Sox. That team won the championship in 1974 and again in 1978, via a formidable squad that included future Hall of Famer Harold Baines. There haven't been any championships in the 42 seasons since, a period encompassing four affiliations, two name changes and an eventual move to the Knoxville suburb of Kodak. The Smokies did win a co-championship alongside the Mobile BayBears in 2004, as the Southern League Finals were cancelled due to the approach of Hurricane Ivan.
SL teams still waiting to win it all: Pensacola Blue Wahoos (established 2012. co-champions in 2017); Biloxi Shuckers (established 2015). Texas League: Frisco RoughRiders, 2004
Every team in the Texas League has won a championship in the 21st century. The Tulsa Drillers emerged victorious in 2018, halting a drought that went back to 1998, and the Amarillo Sod Poodles took home the trophy in their inaugural 2019 campaign. That leaves the Frisco RoughRiders with the longest dry spell, as the longtime Texas Rangers affiliate has gone 15 seasons without a TL title. The team's only championship came in 2004, their second season of existence.
TL teams still waiting to win it all: None. CLASS A ADVANCED
California League: Stockton Ports, 2008
Whether it was via belated feelings of benevolence or the gradual deterioration of his beyond-the-grave reptilian powers, Chopper the alligator finally allowed Visalia to win a Cal League championship in 2019. This leaves the Stockton Ports with the longest title drought, one that only dates to 2008. It all amounts to a blip on the radar for the Ports, who have won 11 championships dating back to 1946 (tied with San Jose for the most in the league). Their current drought isn't even the longest in the history of the franchise, which endured a 15-season dry spell between 1948-62.
Cal League teams still waiting to win it all: None. Carolina League: Winston-Salem Dash, 2003 (as the Warthogs)
The Wilmington Blue Rocks won the Carolina League championship in 2019, ending a drought that dated to 1998. With that, the Winston-Salem Dash lay claim to the league's longest dry spell. Like the aforementioned Stockton Ports, the Dash nonetheless have a long and storied history in their league. Winston-Salem has won championships as the Cardinals (1950-51), Red Sox (1964, 1970, 1973), Spirits (1986, 1993) and Warthogs (2003), but the club is still waiting to win it all as the Dash (its moniker since the 2009 campaign).
Carolina League teams still waiting to win it all: Carolina Mudcats (established 2012); Down East Wood Ducks (co-champions in 2017); Fayetteville Woodpeckers (established 2019). Florida State League: Dunedin Blue Jays (established in 1980, no standalone championships)
Dunedin hasn't been able to catch a break in recent years. In 2017, the Blue Jays advanced to the Florida State League Finals, but their planned series against the Palm Beach Cardinals was canceled due to Hurricane Irma. This season, they won first- and second-half North Division titles en route to an 80-55 record, but the FSL postseason was canceled due to Hurricane Dorian. Thus, their championship drought continues. The Blue Jays, established in 1987, are still waiting for their first outright FSL crown.
FSL teams still waiting to win it all: Florida Fire Frogs (established 2017). CLASS A
Midwest League: Clinton LumberKings, 1991 (as the Clinton Giants)
Clinton has hosted a Midwest League team in every season since 1954, and in all that time, it only has two championships. The first was won by the Clinton Pirates in 1963, the second by the Clinton Giants in 1991. Padres, Reds, Expos, Rangers and Mariners affiliations have since come and gone; 2019 marked the team's first with Miami as the parent club. The LumberKings have made it to the Finals on three occasions this decade, however, including a sweep at the hands of the South Bend Cubs this season.
Midwest League teams still waiting to win it all: Dayton Dragons (established 2000). South Atlantic League: Charleston RiverDogs (established in 1980, no championships)
The current iteration of the South Atlantic League was founded in 1980, with Charleston as a charter member. But no matter the team name (Royals, Rainbows or RiverDogs) or affiliation (Royals, Padres, Rays or Yankees), a league title has remained elusive. The team has appeared in three Championship Series during their 40 seasons of existence but none since the Rainbows were defeated by the Spartanburg Phillies in 1988.
SAL teams still waiting to win it all: Columbia Fireflies (established 2016).