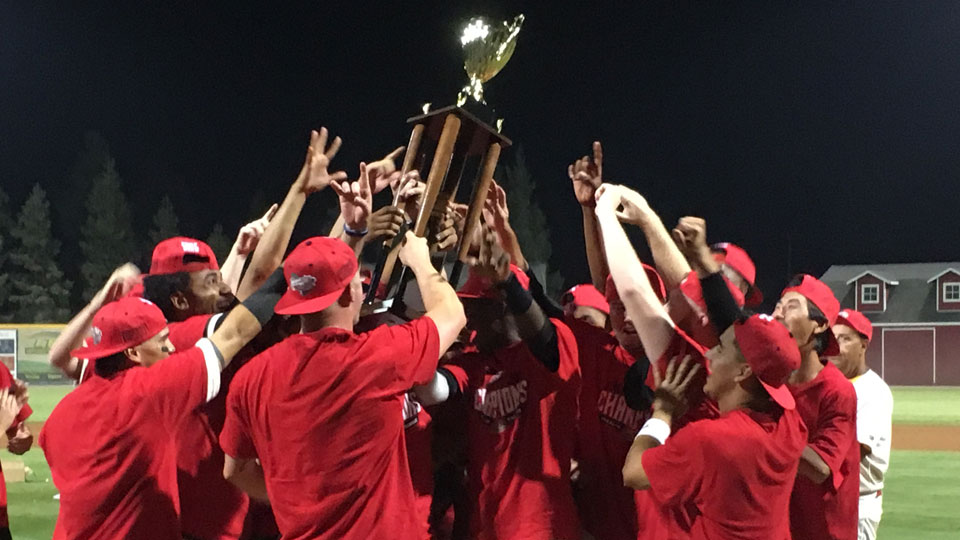 Visalia had been 10-34 in the Championship Series since its last title, falling three times in the past five years. (Visalia Rawhide)

Top-ranked Arizona prospect Alek Thomas stroked a walk-off double in the 10th inning to propel Class A Advanced Visalia over Lake Elsinore, 4-3, on Saturday at Recreation Park. With the Game 4 victory, the Rawhide won the Championship Series for the first time since 1978.

"Alek just doesn't let the moment get to him," first-year Visalia manager Shawn Roof said. "I'm looking forward to seeing him excel. To see what he's doing at a young age [19], he played like he was a 25-year-old."

Visalia jumped ahead with a three-run fifth inning. Yoel Yanqui singled off right-hander Adrian Martinez and took second base on a wild pitch. Max Murphy lined a base hit to center field, plating Yanqui before Jancarlos Cintron struck out on a wild pitch that allowed him to reach first.

Jose Herrera followed with an RBI single to score Murphy, then Cintron raced home on a fielder's choice groundout by Jorge Perez against righty Nick Kuzia.

The Storm began chipping away with two runs in the sixth. No. 14 Padres prospect Gabriel Arias lined a one-out base knock to right off righty Cole Bartlett to score fifth-ranked Xavier Edwards and Eguy Rosario grounded an RBI single to left to plate No. 19 Jeisson Rosario.

Arias greeted reliever Breckin Williams with a two-out dinger over the wall in right-center to tie the game, 3-3, in the eighth.

"We've been doing this all year -- competing and executing," Roof said. "Tonight, our guys did a good job competing. They just didn't let the pressure get to them."

In the 10th, Mason Fox (0-1) walked Geraldo Perdomo on four pitches to bring up Thomas. MLB.com's No. 59 overall prospect, promptly lined a 1-1 offering into left to uncork a championship celebration 41 years in the making.

"We had the top of the lineup coming up and we felt good," said Roof, who managed Class A Hillsboro in 2017-18. "Perdomo does what he does and then Alek came through and hit one into the left-field corner.

"Two 19-year-old kids stepped up. These are guys that should be freshmen in college. When I was 19, I was trying to figure out my class schedules."

Luis Castillo (1-0) etched his name into Rawhide lore, picking up the win with an inning of one-hit relief.

Rawhide pitchers gave up 11 runs on 33 hits and 15 walks with 15 whiffs across 36 innings in the Championship Series, and the defense did not commit an error.

"Our pitching was outstanding all series," Roof said. "Pitching and defense carried us. That's a really good Lake Elsinore team. Our guys kept it close and gave our bats a chance.

"[Storm manager] Tony Tarasco is a class human being. To see the improvement that team made throughout the season. ... They played a heck of a series, you have to give them credit."

As for the curse, legend has it that days after Visalia celebrated its 1978 championship over Lodi, Chopper hit his head and died while trying to escape an aquarium. Just like that, The Sporting News noted, "alligator abracadabra, the curse began."

"I heard [Charboneau] was a character," Roof said. "If he was here, I'd thank him for the curse and for us to be the team to finally break it. To be that team, it's really special."

Charboneau was the American League Rookie of the Year in 1980 with Cleveland. Injuries plagued the happy-go-lucky outfielder during the next two seasons and he was out of the big leagues after the '82 season.

Say it ain't so, Joe. But Visalia hadn't won the Finals in 11 tries since 1978. The team was 10-34 in the Championship Series since its last title and lost the best-of-5 matchup in three of the past five years.