Malloy epitomizes 'The Heart of the Game'

Threshers manager was 'essence of baseball' in 1994 book 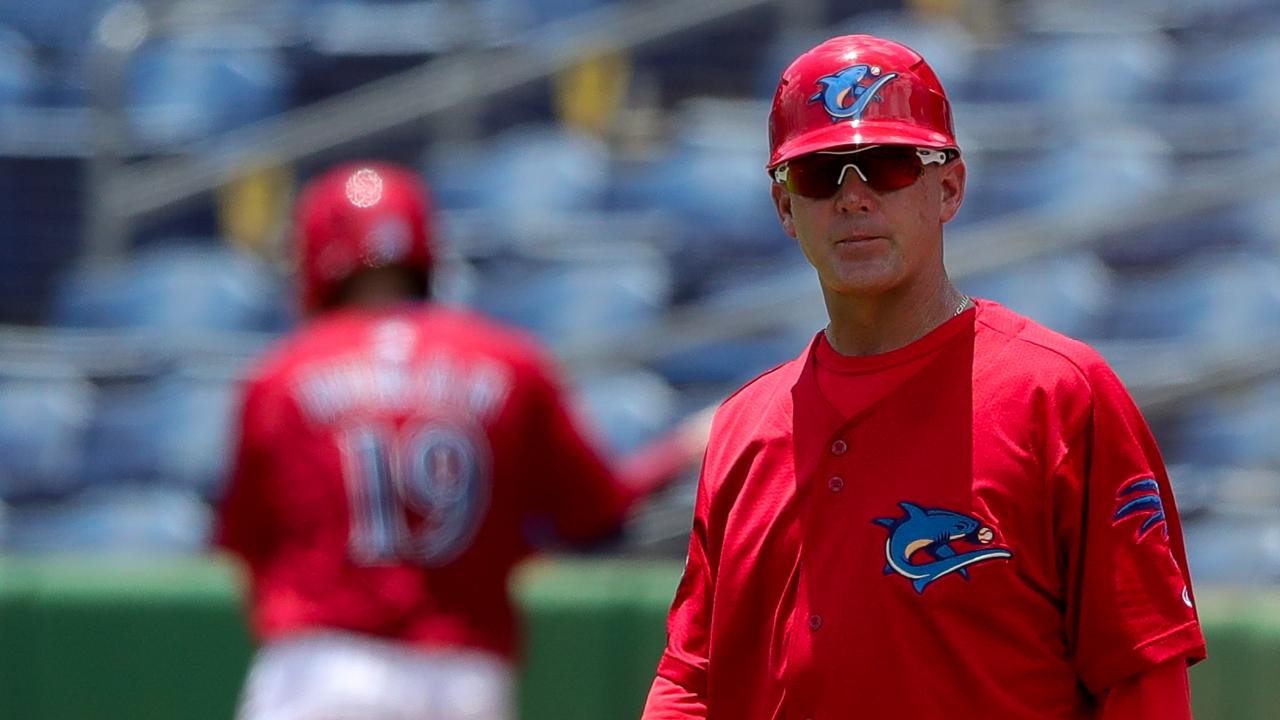 Marty Malloy, manager of the Class A Advanced Threshers, homered in his second Major League at-bat with the Braves. (Clearwater Threshers)

"The essence of baseball." That's how Marty Malloy is described in The Heart of the Game: The Education of a Minor-League Ballplayer. Twenty-five years ago, Paul Hemphill chronicled the 1994 Durham Bulls and Malloy, who was in his third season chasing the Major League dream.

Hemphill, an Alabama native and Alabama Polytechnic Institute grad, also had big league ambitions but was cut by the Class D Graceville Oilers of the Alabama-Florida League during Spring Training in 1954. The writer saw a lot of himself in the 5-foot-10, 160-pound infielder: small-town Southern kid (Malloy grew up in Trenton, Fla.), went to college in his home state (Malloy attended Santa Fe Community College in Gainesville) and a burning desire to grasp higher on the ladder.

The 1994 season is remembered for the MLB strike, which began Aug. 12 and saw the remainder of the season canceled, including the postseason. Or maybe for Michael Jordan's foray into the national pastime. Looking back, Hemphill noted: "Lo, just when baseball appeared to be committing suicide, here came Huck Finn to play some ball."

Malloy, 47, led the Gulf Coast League Astros for three seasons before taking over the Class A Lakewood BlueClaws in 2017. He is in his first season managing the Class A Advanced Clearwater Threshers in the Florida State League.

"We're still playing the same game," Malloy said. "It's nine innings. There are still 27 outs. They still keep score. There's no difference between the game now and 1993, 1994. It's just a matter of fact.

"My father coached football, basketball and baseball. I learned from him. I played the game hard. I ask the same of these kids. Win, lose -- tip your cap."

As a high schooler, Malloy was selected by the California Angels in the 48th round of the 1990 Draft but did not sign. Two years later, after his JUCO stint, the Braves gave the free agent second baseman a $15,000 bonus and shipped him to Idaho Falls in the Pioneer League, where he hit .315 in 62 games. In 1993, Malloy stole a career-best 24 bases and batted .293 with the Macon Braves in the South Atlantic League. He was climbing the ladder. It was during this time Hemphill birthed the idea of a book about an All-American boy playing the national pastime with his heart on his jersey sleeve and the game's zero-sum bottom line.

"I was contacted by Paul, asking if I'd be willing," Malloy remembers. "He wanted to write a story about Minor League baseball. I came from the sticks, we met in Macon, then Durham. I still remember when the new ballpark was being built."

Hemphill, who died in 2009, knew a good story when he wrote one -- and The Heart of the Game is every Smalltown, USA hopeful's story. Local boy makes good, gets put into the system and business being business is the lesson learned. Marty Malloy is the real-life Jamie Weeks of Long Gone, a 1987 HBO movie also written by Hemphill.

In the book, Macon manager Randy Ingle is quoted, "My job is to see these kids develop. … I'd say he's right on schedule to move up to Durham next year. … All in all, I think he's got a better than average chance to make it to the Braves one day. He's hardheaded, but he knows what he's got to do."

In '94, Malloy's contract was for $1,100 a month, and there was one thing the Braves wanted for their money: "a smart little two-hole hitter who could bunt and draw bases on balls and slash ground ball hits against anybody" -- including left-handers, against whom he was only 5-for-20 at Macon.

The Class A Bulls -- Hollywood-famous for the 1988 Kevin Costner romantic comedy -- was Malloy's team for 1994, the final season for Durham Athletic Park. From working on double-play pivots to figuring out lefties, the DAP was home for the kid whom Braves Minor League instructor Bobby Dews noted "is going to be fine if he doesn't kill himself first" from reckless abandonment between the lines.

Twenty-five years ago, a furnished three-bedroom apartment rented for $750 a month. The Bulls' roster included future Major League outfielder Damon Hollins, third baseman Bobby Smith and pitchers Jamie Arnold, Matt Murray, Darrell May, and Carl Schutz. The fans were plentiful, including the real-life Millies and Duke students, plus Martie Byron, a nurse who delivered birthday cakes to the players.

On Opening Day, Malloy was penciled into the eighth spot in the order. He wasn't happy batting that low, but he was playing ball -- and in the lineup against a left-hander. Whether Malloy realized it or not, this was the simmering point of baseball as a business. Through the first 10 games, there were times he was not in the lineup. He felt over-matched; pitchers lived up to their position. Even something as innocuous as finding food while on the road was a chore, not to mention the no-frills hotels. It is the epitome of the bus leagues.

"When they say, 'Play ball,' let them play," Malloy says. "At the end of the day, it's about getting the kids better." The words echo what Ingle preached a generation earlier when Malloy was a rising farmhand.

Malloy was able to pick the brains of Brett Butler, Glen Hubbard and Willie Stargell. The real "Crash" Davis -- former Philadelphia A's second baseman and World War II veteran Lawrence Davis -- popped in to catch a game at the DAP. The infielder also had to contend with teammates coming and going -- such is life in Minor League baseball.

Still only 21, Malloy emerged as a team leader. "No doubt about it," manager Matt West proclaimed, "the kid's got great work habits and instincts. He's a ballplayer." The son of a coach, he understood the nuances of the game and was able to slow down the pace from merely game by game to literally inning by inning.

"If Marty hits .280 in the Carolina League," West predicted, "it will have been a hell of a year." He was batting .281 after a month and finished at .264, fourth-best among those who played at least 100 games with Durham.

Today, Malloy reminds players that his dues were paid in the Minor Leagues. He's been on the buses, "though it's very different," he admits. "The buses are definitely different. But the game, it hasn't changed. There are still two umpires on the field in the lower levels. From 2019 vs. 1993, when the book started, it's about preparing these kids."

The career path for every Minor League player is unique. If the organization makes a change, that's one thing. For a player to decide to give up the dream, that is something foreign. "You go through a lot of stuff together," Malloy said 25 years ago. "You sit around late at night, talking about your dreams and your fears, making the big leagues, not making the big leagues, and you really get to know what makes each other tick."

That rings true today. As a manager of players trekking their way through the Minor Leagues, Malloy's perspective is still that of someone who lives and breathes the dream.

"We have an analytics guy, a numbers guy," he says. "We get a ton of information. I'm not against it -- but you have to know how to translate it to a player.

"I am old school, but I'm also new school. We're fortunate that [the Threshers] have a lot of kids who played with us last year at Lakewood. I understand the sabermetrics and the analytics. I also know how to translate that information to a player."

After 774 games in the Minor Leagues, Malloy made it to The Show, called up to the Braves for a Sept. 6, 1998, debut against the Mets at Shea Stadium. The 14,949th player in MLB history, Malloy went 2-for-4 with a homer in his second at-bat as Hall of Famer John Smoltz hung 12 K's on the board in a complete-game three-hitter as Atlanta won, 4-0, against Rick Reed.

It was a short-lived stint. Malloy spent the 1999 season at Triple-A Richmond. From 2000-03 he played on a series of one-year free-agent deals with Minor League franchises for Detroit, Cincinnati, Florida and Los Angeles. In May '03, the Dodgers sold his contract to St. Louis, who assigned him to the Memphis Redbirds for his final professional season.

"I met a lot of people [in baseball] who are important in my life, a lot of inspiration, a lot of love," Malloy says. "I don't think … my career wasn't, I wasn't hardcore. It was hard love. It's no different today.

"I saw where [Yordan Alvarez] in Houston hit a home run in his second at-bat. … I still remember that day. Those are good times."

A year later, with six organizations under his belt, it was the end of the dream. Huck Finn took off a jersey for the last time as a player.

The Heart of the Game peels back layers of Malloy's dedication to the "essence of baseball." The 1994 season could have been remembered for Hemphill's missive from Norman Rockwell's rural America. Instead, as the author noted, the players "felt like kids caught in the crossfire of an ugly marriage, cowering beneath the bedcovers while their parents raged at each other in another room, hoping it soon would end so they could go out and play."

After all, that's the only thing Marty Malloy wanted to do.