Dominance from Robert, Lux, Gore, France stood out in Minors 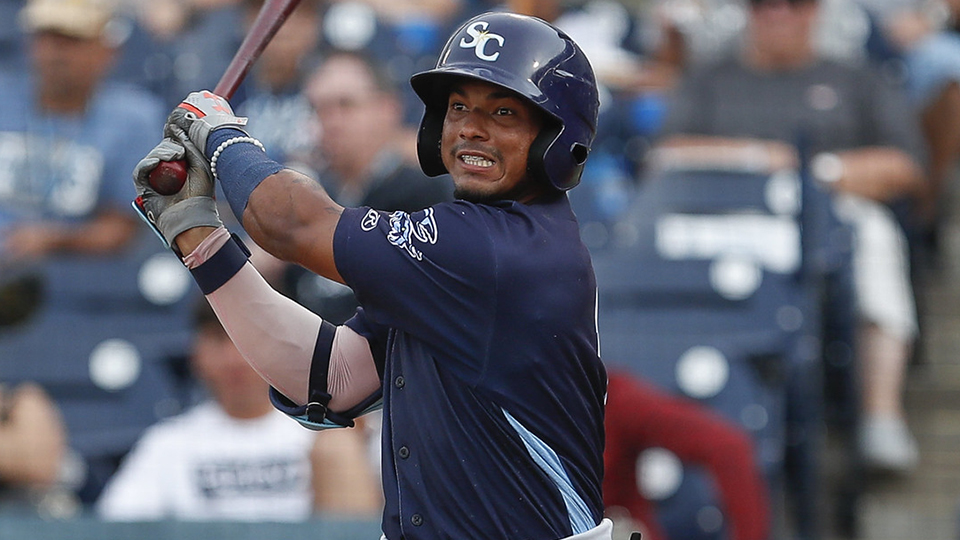 They're set in stone now.

With baseball very much a game of numbers, statistics become the strongest and most common way to recall and categorize a season over the long term. Now that the 2019 Minor League regular season has come to a close, this year's numbers are officially immutable. Today's Toolshed lays out the full-season Minor League qualified leaders in some of the major hitting and pitching categories and then reviews a few of the most memorable stats from top prospects from the season that was.

.399, Ty France, average: There was a lot of hubbub surrounding Vladimir Guerrero Jr.'s chase for .400 in 2018, but it was the Padres infielder who got even closer to being the first Minor Leaguer to reach the mark since Erubiel Durazo hit .404 in 1998. France was just below the line as late as Aug. 16, and then he got good news for his career but bad news for his pursuit. San Diego summoned the 25-year-old to the Majors, and he didn't return to Triple-A El Paso in time to push for .400 or accrue enough at-bats to qualify for the Minor League batting title. (Not that you'll hear him complaining.) France never produced an average lower than .359 in a month during his time in the Pacific Coast League and finished with a .399/.477/.770 line and 27 homers in 76 games with the Chihuahuas. Of course, France hasn't come close to producing at the same level in the Majors -- he has a .223/.270/.378 line through 54 games entering Tuesday -- but the 2015 34th-round pick certainly put himself on the map for the rebuilding club.

0.83, MacKenzie Gore, WHIP: With 101 innings between Class A Advanced Lake Elsinore and Double-A Amarillo, the Padres' top prospect just missed the innings cutoff to qualify in the major categories above, in part because San Diego shut him down a little early coming off his limited 2018. But if we move the barrier to entry to 100 innings, he would've led in WHIP and ERA (1.69). The WHIP is a little more impressive because of everything that goes into it: Gore held the opposition to a .161 average and walked only 7.4 percent of the batters he faced. Never mind scoring, it was as difficult to reach first base against the 20-year-old southpaw as it was against anyone in Minor League Baseball -- and for good reason. Gore's mix of a plus fastball, plus curve, above-average slider and above-average change is as diverse a mix as you'll find among pitching prospects. He's always been a big piece of San Diego's rebuilding efforts, and this season only solidified that fact.

1.197, Gavin Lux, OPS at Triple-A: The Dodgers' top prospect arrived at Triple-A Oklahoma City on June 27 and left it on Sept. 2 to move to the Majors. In between, he did a lot of bashing. The left-handed-hitting shortstop/second baseman produced a .392/.478/.719 line with 13 homers, four triples and 18 doubles over 49 games in the Pacific Coast League, matching his home run total from Double-A Tulsa in 15 fewer games. Only Mark Payton (1.219) and Jared Walsh (1.200) had higher marks in the PCL during that June 27-Sept. 2 period, and no one had more hits (78) or runs scored (54) or produced a higher average or OBP. The Dodgers flirted with the idea of keeping Lux off the Major League club when rosters expanded in September, but in the end, his bat proved too good to be kept from a team in serious pursuit of a Major League title.

1.10, Brendan McKay, ERA: Put aside McKay's chances of being a two-way player for a moment, and just bask in how dominant the Rays' No. 2 prospect was on the mound between Double-A Montgomery and Triple-A Durham. The 23-year-old southpaw allowed only nine earned runs over 73 2/3 innings, striking out 102 and walking only 18 over that span. The Louisville product has three above-average pitches in his fastball, cutter and curve and makes the whole package play up with impressive control. The Rays gave him his MLB debut on June 29, only to see inconsistent results and a bout of shoulder fatigue. But last Friday, McKay showed he's still capable of great things with seven strikeouts and only one hit allowed over 3 2/3 scoreless innings -- a sign that his Double-A and Triple-A results weren't mere mirages.

1.6, Wander Franco, BB/K: Franco is gifted at many aspects of the game -- it's why he's considered the No. 1 overall prospect in the game, of course -- but his command of the strike zone was particularly impressive. Between Class A Bowling Green and Class A Advanced Charlotte, the switch-hitting shortstop walked 56 times with only 35 strikeouts in 495 plate appearances. Only Nick Madrigal (more on him below) had a better BB/K ratio among the 686 Minor Leaguers with at least 400 plate appearances this season. Franco adds more power than Madrigal and earns points for doing all of this after turning only 18 in March, making him the same age as many of those prep players who were recently taken in the 2019 Draft. Like Guerrero -- who also produced incredible BB/K ratios in the Minors -- this likely won't last as Franco's game matures and he climbs the ladder against tougher pitching. But it's an incredibly strong first step in full-season ball.

3.0, Nick Madrigal, strikeout rate: Madrigal appeared on this list a year ago as well after he opened his professional career with 72 straight plate appearances without a K. In short, everyone knew the No. 4 White Sox could make a ton of contact. Just how much contact could he make, though, in his first trip to full-season ball? Well, the 22-year-old infielder was given 532 plate appearances between Class A Advanced Winston-Salem, Double-A Birmingham and Triple-A Charlotte. He struck out in only 16 of them. Including his 2018 campaign as well, Madrigal has still only fanned in 3 percent of his Minor League plate appearances, the lowest career mark among any Minor Leaguer since the 2009. Yes, that includes Willians Astudillo, whose career started in 2009 and saw him get punched out in only 3.2 percent of his PAs in the Minors. Madrigal's approach right now doesn't lend itself to much power -- he hit only four homers in 2019 -- but an elite skill is an elite skill. The Oregon State product should test his bat-to-ball skills next year in the Majors.

23, Yordan Alvarez, home runs at Triple-A: Right now, Yordan Alvarez is the favorite to win the American League Rookie of the Year award, thanks to his upper-deck power (literally). But remember when he exhibited that at the beginning of the season at Triple-A Round Rock? After playing 45 games at the Minors' top level in 2018, the left-handed slugger returned to the Pacific Coast League in the spring and set the circuit ablaze. His 23 homers through June 9 (the date of his promotion to the Majors) were the most among all Minor League hitters. Through Monday, he added 24 dingers in the Majors, giving him 47 on the season across two levels. He's also driven in 143 runs between both spots. There was some question entering the season about where Houston could find a spot for Alvarez in its loaded lineup. After his hot start, that didn't prove to be an issue.

170, Luis Robert, wRC+: Yes, a good portion of this stat was driven by the insane 305 wRC+ Robert put up over 19 games at Class A Advanced Winston-Salem to begin the season. But MLB.com's No. 5 prospect was well above-average everywhere he went in 2019 as evidenced by his 155 mark at Double-A Birmingham and 136 at Triple-A Charlotte. The 22-year-old outfielder finished with a .328/.376/.624 line, 32 homers and 36 stolen bases in 122 games across all three levels. At the beginning of the season, no one doubted Robert's five-tool potential, but whether he could stay on the field after being limited to 50 games in 2018 was an open question. He showed what he's capable of when he's on the field consistently, and the results are nothing short of eye-popping.

5,752, Triple-A home runs: That's 2,440 from the International League and 3,312 from the Pacific Coast League. That's also up from 3,652 in 2018 (1,555 in the IL, 2,097 in the PCL), an increase of 57.5 percent in only one season. Meanwhile, home runs went down at every other full-season level. Double-A homers dropped from 3,307 in 2018 to 3,115. Class A Advanced saw dingers go down from 2,816 to 2,624. Class A roundtrippers fell from 2,736 to 2,564. These are neglible differences when it comes to year-to-year change, but they illustrate how stark the jump at the Minors' highest level was in 2019. The major difference, of course, was the move to using the Major League baseball at Triple-A for the first time, coinciding with a time when MLB itself is trying to figure out how changes in the ball have led to a power jump of its own. The increase in power made many in the game reevaluate how they looked at pop in the International and Pacific Coast Leagues as well as how they looked at pitching numbers. Those who dominated on the hill, like McKay and Zac Gallen, stand out even more at a time when league-wide ERAs were 4.90 in the IL and 5.49 in the PCL. The Triple-A power surge might have provided the Minors with a shock in 2019. It will be interesting to see what happens in 2020.