Toolshed: Bucs' Martin back in many ways 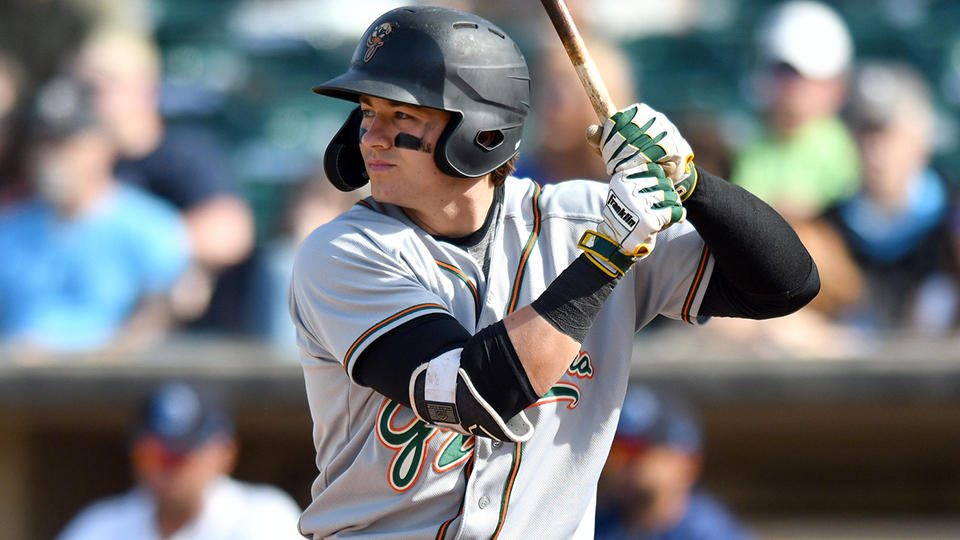 Greensboro's Mason Martin has produced a 1.007 OPS over 42 games since May 1. (Ken Inness/MiLB.com)

When Mason Martin walked into the home clubhouse at Class A West Virginia's Appalachian Power Park, a few things were different. Sure, all of the Pirates logos had been changed to Mariners to mark the affiliation change that had occurred the previous offseason. And he could see his old locker -- old because he last occupied it on June 7, 2018 right before he was sent down to Rookie Advanced Bristol.

But these were cosmetic changes. There was another big one, too. Pittsburgh's No. 28 prospect was back as the North Division starting first baseman for the 2019 South Atlantic League All-Star Game, held in his old home stadium, and the Class A co-leader in home runs with 18, this time for Greensboro.

"It hurt, that one definitely hurt," Martin said, reflecting on his demotion from West Virginia. "It still sticks with me. It still fuels me. That's what fueled me in the offseason. When coach called me in and told me they wanted to give me a chance to change my momentum and give me a clean slate, looking back I knew they did the right thing. I was in a tough spot. It was really the first time I'd ever failed in baseball. But I still use it as fuel to get where I am now."

June has been a bit of a complicated month in Martin's still-young Minor League career. Two years ago, the Pirates came calling in the 17th round to take the then-outfielder out of Southridge High School in Kennewick, Washington. That's typically well past the point when prep players are nearly guaranteed to sign, and Martin did have a full scholarship waiting for him at Gonzaga should he have chosen to go the college route. But the Bucs liked the left-handed hitter's power potential enough to offer him $350,000 as a signing bonus with $225,000 of it coming out of their Draft bonus pool. It was also about equal to the bonus slot of the 144th overall pick, meaning in some way Pittsburgh valued him as a fifth-round talent.

"I talked with my parents, and we all knew my goal has always been to be a big-league player," Martin said. "This is the fastest way to make that happen. ... The offer was right. It was right where I wanted it to be. It showed they wanted to invest in me for a long period of time. And yeah, there was some back and forth, but everyone I talked to said the Pirates were a great organization for developing guys and I could tell they were really high on me."

After signing in July, Martin quickly justified Pittsburgh's optimism in him by hitting .307/.457/.630 with 11 homers in 39 games in the Gulf Coast League. He was named the GCL MVP in a year in which the complex circuit also boasted future Top-100 prospects like Royce Lewis, Drew Waters and Luis Garcia.

If that inflated Martin's profile outside the organization, the first few months of his first full season certainly deflated it. Getting the jump to Class A for his age-19 season, Martin -- by that time a full-time first baseman -- got off to a decent start for West Virginia before Sally League arms figured him out in the season's second month. From May 2-June 7, he didn't collect more than one hit in any of his 20 games, going 6-for-63 (.095) with one extra-base hit and 31 strikeouts. That caused his average and OPS to drop from .276 and .870, respectively, to .200 and .636. Martin had gone deep just four times over 45 games with the Power, essentially taking away his loudest tool.

A little under two weeks after the demotion, Martin was in the Bristol starting lineup, batting third, on Appalachian League Opening Day. He homered in the sixth inning. The slugger was able to rebuild himself a bit, hitting .233/.357/.422 with 10 homers in 59 games at the Rookie Advanced level, but ending the season lower than he started left a bad feeling that lasted all the way into his second offseason.

"I think back to where I was the last time I was in West Virginia, and I was just in a different place mentally and physically," Martin said. "I used what it was like here as fuel for my workouts, fuel for when I'm on the field. I don't want to be in the rut I was in here ever again, and I've tried to keep working to make sure that's not the case."

Those workouts Martin mentioned were geared toward getting his conditioning up to the point where he could better handle a 140-plus-game schedule in his second full season. He also tried to add more strength to his game, coming off the power outage in West Virginia, and he just so happened to have a good teacher in his father, Chad, an International Natural Bodybuilding Association Hall of Famer. He also added yoga to his regimen, giving an added dimension to his physical and mental game.

"Along with all the stretching -- and there's a lot of that, so I got pretty flexible -- I also discovered breathing," he said. "It taught me to stay in the moment. Just focus on my breath. Don't look too far ahead. That's something I've tried to carry into my game. Say if it's the second inning and I'm 0-for-2, last year I would have thought I needed two hits right away. This year, I'm taking it at-bat by at-bat. This next at-bat is the most important one -- that's all that matters."

The combination of cardio, strength and yoga training has paid off in Martin's return to the Sally League this season with the Pirates' new Class A affiliate in Greensboro. His 18 homers in 65 games are three more than anyone one else in the South Atlantic League so far. (Only Indians prospect Will Benson has hit as many at the Class A level.) In a testament to his offseason preparation for a long season, he has even improved over time with a .288/.377/.630 line, 12 homers and a 179 wRC+ in 42 games since the start of May. As things stand, he ranks third in the SAL with a .930 OPS and 161 wRC+ in 65 games overall.

Perhaps the most noticeable improvement to Martin's game has been his ability to put the ball in the air in his second go at Class A. The lefty slugger had a flyball rate of 34.9 percent and a groundball rate of 43.4 percent in 2018 with West Virginia. Now, he is hitting flyballs at a rate of 46.6 percent (seventh-highest in the SAL) and groundballs at 35.1 percent (eighth-lowest), allowing him to play into his natural power.

"I think that's always been my philosophy -- to drive the ball as best I can," he said. "The perfect swing, for me, isn't a ball up the middle. The perfect swing is one I can get under and drive, hopefully to a gap or even over the wall. Now, I have the strength behind that swing too, so I can get away with that approach, too. ... I don't need to hit it that perfectly to get extra-base hits. I can stay in the zone a little longer, and if I'm a little early, it's still a drive to right-center. If I'm late, OK, same thing to left-center."

As exciting as the offensive gains have been, there are still other areas of improvement in Martin's game. He has struck out in 32.1 percent of his plate appearances with the Grasshoppers, though he has adjusted his two-strike approach to include a choked-up bat and widened stance in the hopes of making more contact. His defense also remains a work in progress at first base, placing an even heavier burden on his bat to bring value.

But for all the 20-year-old has gone through in his young career, he does think at times what his baseball life would be like as a college sophomore this spring instead. And then, he remembers he's already a South Atlantic League All-Star.

"The way I look at it, I've had hundreds and hundreds of at-bats already as a pro, and that's just in my second full season," Martin said. "In college, you might have to sit your first year. You might not get as many at-bats. I never was sure of where I could have been had I gone to college. But here -- even with all the ups and downs -- I'm definitely further ahead than where I would have been anywhere else."