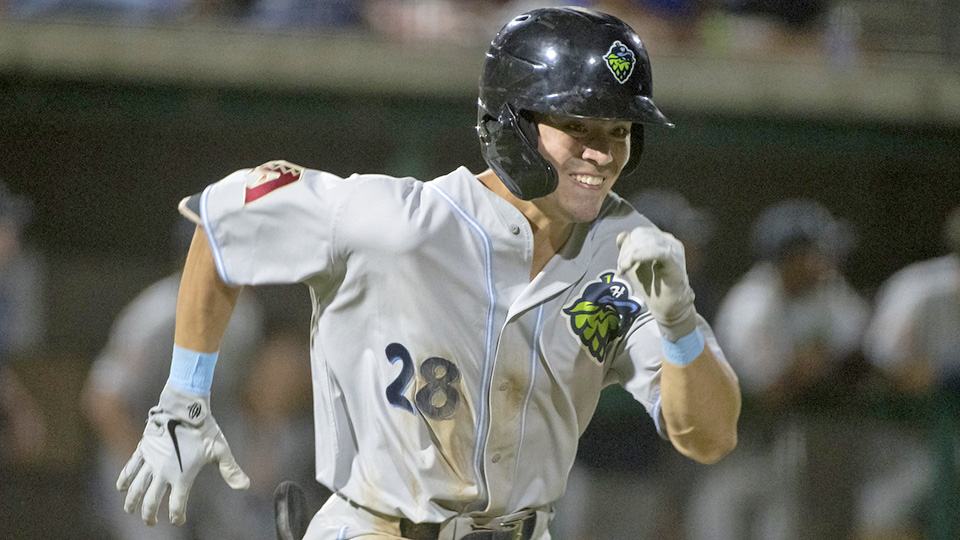 Corbin Carroll was 18-for-19 in stolen-base attempts in his first Minor League season. (Jared Ravich/MiLB.com)

For opposing defenders, catch Corbin Carroll if you can. The same goes for D-backs fans and prospect lovers. The 2019 first-rounder already has shown the type of elite speed that means he may not be around the Minor Leagues for long.

Like many other numbers in baseball, Speed Score isn't a perfect stat. It won't go remarked upon on a national broadcast. It won't pop up among box scores in the morning newspaper. It's often tucked deep into a player's statistical page, if it appears at all. But why is it important? Because speed and how it's used in a game is important.

While other measurements like sprint speed are available for Major Leaguers, those aren't currently available for Minor Leaguers. And yet, speed is considered one of the five essential tools for a budding prospect. What Speed Score, which was originally developed by Bill James, aims to measure isn't how fast a player can get down the line, but rather, how effectively players use their speed to impact games.

Speed Score -- or the FanGraphs version we'll use for the purposes of this story -- comes down to four components, explained in the four-component model this link by David Appelman. To paraphrase those components:

• Stolen-base percentage: What is a player's success rate of stealing a base vs. getting caught?
• Frequency of attempts: How often does a player attempt to steal a base in the first place? (This controls for players going 1-for-1 on the basepaths and making that look like good speed.)
• Percentage of triples: Triples are typically seen as the speediest of the base hits. How often does a player pick up a triple? (This component typically results in a number between 0 and .03, but is put on a 0-10 scale.)
• Runs-scored percentage: The faster a player is, the more likely they are to come around to score a run. Again, this portion isn't perfect, but it is controlled for home runs so sluggers don't get an unfair advantage.

Take the average of all four of those components, and the result is Speed Score, or Spd. Enough dilly-dallying and stage setting. These are the players among MLB.com's Top 100 Prospects with the highest Speed Scores during the 2019 season:

This is how we arrive back at Carroll.

The D-backs took the Seattle-born prep standout with the 16th overall pick in June in hopes he could be an impressive hitter from the left side and show off plus-plus speed on the basepaths and in center field. He showed them plenty with the bat, hitting .299/.409/.487 over 42 games. He made the adjustment to pro ball smoothly enough that the Mariners promoted him from the Rookie-level Arizona League to Class A Short Season Hillsboro, and he responded by helping the latter capture a Northwest League title.

But Carroll's speed was truly his most elite skill, as one would guess based on the 70 in that category on his MLB.com scouting report. According to Speed Score, Carroll was best at picking up triples. His seven across both levels was tied for ninth-most among Top-100 prospects, despite only getting 154 at-bats. Only Abrams (eight in 150 at-bats) had a better triple rate in this elite group. In fact, in 11 games with the Hops, Carroll had more triples (four) than doubles (three) and had only two more singles (six).

But the Washington native didn't just reach third base on the fly. He was a terror on the basepaths, stealing 18 bases in 19 attempts over 42 games. No Top-100 prospect with more than 10 stolen bases had a better success rate than Carroll's 94.7 percent, and that tied for 16th among the 792 Minor Leaguers with double-digit thefts this season. As for runs, Carroll reached base 74 times through a hit, walk or hit-by-pitch and came around to score 34 times -- discounting home runs in both numbers. His 9.1 in the run component was seventh among Top-100 prospects.

In essence, there wasn't any part of Speed Score in which Carroll did not excel in 2019. So what does this say about the way we should view the 19-year-old going forward? If his run tool wasn't considered nearly top of the line, then this Speed Score would raise some eyebrows. Instead, he's one of six Top-100 prospects to receive a 70 grade or above in their run tool, alongside Abrams, Brujan, Royce Lewis, Xavier Edwards and Cristian Pache. That's some speedy company. What's more, his 8.9 Speed Score is right around the same marks put up by notable speedsters Adalberto Mondesi (9.0), Mallex Smith (8.8) and Myles Straw (8.8) in the Majors. Each of those players ranked in the top 25 in the Majors in average sprint speed out of 568 qualifiers.

Carroll has a ways to go before he can truly measure up to the fastest of the fast in the Majors. The 2019 first-rounder will spend the next few seasons trying to build up his bat, specifically his power after going deep only twice in 42 games this summer. But this type of fast start -- in more ways than one -- is incredibly promising. Need another reason for optimism that Carroll can carry this forward? Last season's Top-100 Speed Score leader was Robert, who finished just behind Carroll in the category in 2019.

Here are some other Speed Score-related notes from the 2019 season:

• In perhaps any other Draft class, Abrams would have been the most notable speedster. The sixth overall pick had eight triples in 34 games and went 15-for-21 in stolen-base attempts through 34 games in the Arizona and Midwest Leagues. The six caught-stealings were all that kept him from jumping over Carroll, considering he received at least a 9.7 in the other three components. Expect him to compete with Edwards for the title of the fastest player in the Padres system in 2020.

• Using the average and standard deviations for Speed Score and run-tool grades, we can determine the biggest speed overperformers and underperformers among Top-100 prospects in 2019, according to the expected Speed Scores (xSpd) based on those run tools. The list of overperformers isn't very interesting. Giants catcher Joey Bart and Red Sox first baseman Triston Casas top that group, even though both performed more like 50-grade runners than their 30-grade run tools indicate.

Instead, what's more interesting is the list of underperformers.

As previously mentioned, Pache is in a limited group of plus-plus runners among this Top-100 batch. However, his Speed Score was closer to that of a 50-grade runner. The Braves outfielder is still learning how to translate his speed to the basepaths. He attempted 19 steals in 130 games between Double-A and Triple-A and was successful in eight of them. His ability to burn should make him one of the best defensive outfielders in baseball when he reaches the Majors, likely in 2020. But he'll need to make that transfer to the dirt as well to get the full value of his prospect profile.

Elsewhere, there is little worry Adell won't be a fast runner going forward, but in 2019, he was coming off major leg injuries that delayed his start until late May. He didn't attempt a steal until June 9 and tried to take only one bag in 27 games with Triple-A Salt Lake following his Aug. 1 promotion to the top level. What's more, none of his 37 extra-base hits were triples. Check in on the Speed Score in 2020.

White might have surprising speed for a first baseman, but he ran more like a 40-grade speedster with only two steals in 2019. Bleday isn't known for speed at all and didn't help that reputation with no steals, no triples and only 10 non-homer runs in 38 games to begin his career. Sanchez went 5-for-9 in stolen-base attempts in 78 games at Double-A Montgomery and didn't attempt a theft in 35 games at Triple-A, either with New Orleans or Durham. With the Marlins outfielder also underperforming in power -- see last week's ISO story -- Sanchez's stock could be dropping going into his first offseason with Miami.