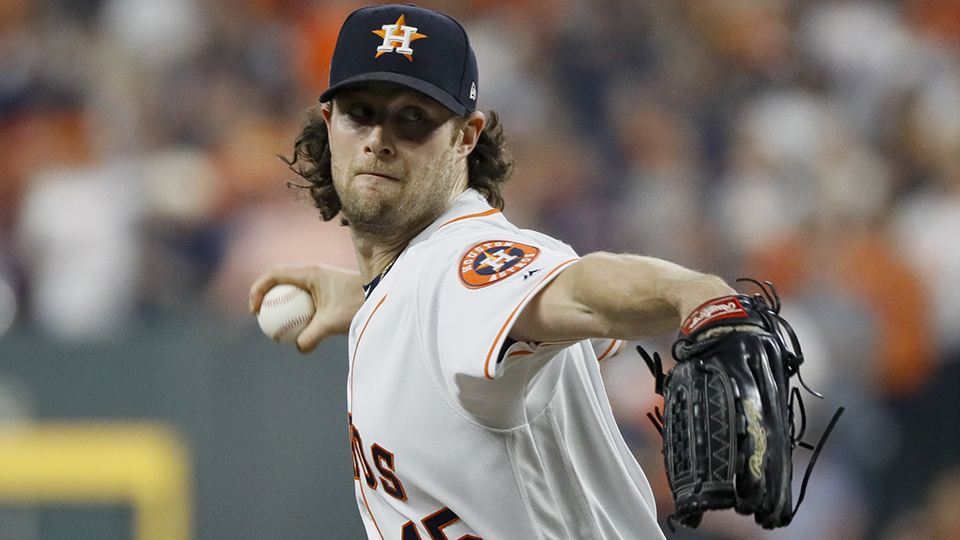 Gerrit Cole enters free agency for the first time after playing seven seasons for the Pirates and Astros. (Matt Slocum/AP)

Monday was the final day of the Major League Baseball "quiet period," or the five-day stretch after the World Series in which clubs can negotiate only with their own players and no other free agents. Also on Monday, all clubs and players had to decide whether they would pick up their 2020 team or player options, and organizations had to announce if they were extending the qualifying offer to their eligible free agents. With all of that now in the past, any free agent can discuss contracts with all 30 Major League organizations.

In other words, the Hot Stove is officially on.

Major League clubs will make big personnel decisions in the weeks and months to come before Spring Training, and if last year was any indication, perhaps right up to Opening Day or even beyond. Those moves have trickle-down effects for prospects and the player-development pipelines in general. Today's Toolshed previews the biggest potential moves of the offseason and the ramifications they'll have at the lower levels.

Gerrit Cole: Any story about the offseason's biggest potential moves has to start with the 29-year-old right-hander. Cole's numbers famously jumped with his move to the Astros before the 2018 season and he's coming off easily his best campaign yet, one in which he's considered an American League Cy Young co-favorite with potentially former teammate Justin Verlander after leading the AL with his 2.50 ERA, 326 strikeouts and 13.8 K/9 over 212 1/3 frames. He will be in demand, and he will be paid. But by whom?

Expect the heavy hitters with the Dodgers, Giants, Yankees and Phillies potentially jumping in to push themselves over the edge. Of those four, the Dodgers might have the most interesting trickle-down. There was hope that top-six prospects Dustin May and Tony Gonsolin could compete for a rotation spot coming out of the spring, and breakout prospect Josiah Gray isn't far away either after ending 2019 at Double-A Tulsa. San Francisco, meanwhile, doesn't have nearly the same logjam. None of its pitchers rank among the club's top-four prospects and No. 5 Logan Webb is coming off an eight-start run in the Majors in which he posted a 5.22 ERA. If the Giants are going to turn things around (and potentially lose Madison Bumgarner), they may have to swing big in the free-agent pitching market. The Yankees and Phillies sit in between with top talents such as Deivi Garcia and Spencer Howard waiting in the wings in the upper Minors, though neither should preclude them from going after Cole.

The other interesting team to keep an eye on should be the Angels. It's long been rumored that Cole, a UCLA product and California native, might prefer to return closer to home. Los Angeles owner Arte Moreno isn't known to shy away from big swings, and even with $156.6 million on the books for 2020, the Halos need something to compete with the Astros in the AL West. Los Angeles is especially light on pitching in the system -- Patrick Sandoval is the top pitching prospect and he placed ninth overall at the end of 2019 -- and with Jo Adell and Brandon Marsh potentially preparing to help the big club in 2020, this might be the perfect time for the Angels to strike.

The Mookie Betts issue: This really shouldn't be an issue at all, but it seems like it might be. Betts has one season of team control left, and the 2018 AL MVP figures to make a ton in his last year of arbitration. MLB Trade Rumors estimates Betts would get $27.7 million as part of that process. George Springer, in his final year of arbitration, received the second-highest projection at $21.4 million. That's how good Betts is, in case the four All-Star teams, four Gold Gloves and two Silver Sluggers weren't indicative enough. But the Red Sox have talked openly about trying to get under the $208-million luxury-tax threshold, especially after J.D. Martinez chose not to opt out of his contract Monday. Trading the 27-year-old would go some ways toward solving that, even if it means trading away one of the game's best talents in his prime. Dealing Martinez could do the same, but would bring back less of a return because of his defensive deficiencies and likely need to stay in the AL.

There isn't a perfect comp here in terms of dealing a superstar with one year of control left. Paul Goldschmidt's move to the Cardinals, which sent Luke Weaver, Carson Kelly and Andy Young to the D-backs, could be the closest, but a Betts return should be higher given his elevated talent level and younger age. Any swap involving Betts would provide a boost to a Red Sox farm system that currently only boasts one Top-100 prospect in Triston Casas, and adding a young controllable pitcher like Weaver would be needed for a club that stands to lose Rick Porcello and is still trying to figure out the long-term roles of Tanner Houck and Bryan Mata. But for a team one year removed from winning its fourth World Series since 2004, Boston should remain in win-now mode, and it's easier to do that with a player like Betts still in the lineup, extension or no extension.

Will Padres cash in?: One could make the case that San Diego has already tried to do this twice by signing Eric Hosmer and Manny Machado to massive free-agent deals in each of the past two offseasons. The Padres sold both players on their long-term visions of building from within, and that bore some fruit with the contributions Fernando Tatis Jr. and Chris Paddack made as rookies in 2019. With MacKenzie Gore and Luis Patino looking like the next big talents up, the Padres could spend this offseason filling in the gaps with bigger Major League moves. Kevin Acee of the San Diego Union-Tribune has already written that San Diego could pursue World Series MVP Stephen Strasburg as a free agent once he opts out. Such a move would give the Padres a legitimate ace and potentially allow Gore and Patino more development time.

There are also the potential for trades. San Diego has six Top-100 prospects and some solid depth in the Minor League ranks below that. Should a free agent like Strasburg slip away, the Padres could certainly dip into that depth to bring a different big name, perhaps like Mets right-hander Noah Syndergaard if he's still available as has been rumored for a while now. At the least, San Diego's moves this offseason will likely be done with faith in its Minor League talent at the center of the decision-making process. It's that talent that could, one way or another, bring the Padres to their first playoff appearance since 2006.

Can the Nationals afford to lose Anthony Rendon?  Fresh off their first World Series title, the Nationals face a fight to keep two of their franchise cornerstones. One is Strasburg. The other is arguably the more valuable player in Rendon. The third baseman has been worth 24.2 fWAR since 2016. Only Mike Trout (34.9), Betts (30.7), Christian Yelich (25.4) and Max Scherzer (26.1) have been worth more in that four-season span. So Rendon is in for a payday before turning 30. What happens if the Nationals get outbid? There are other free-agent options in a deep year for third basemen with Josh Donaldson and Mike Moustakas also on the market and likely available more cheaply than Rendon.

But it gets more interesting to consider internal replacements. The Nats don't claim a deep system these days, but their top two prospects are infielders Carter Kieboom and Luis Garcia. Both are upper-level shortstops looking to get out of Trea Turner's shadow, but of the two, Kieboom might be the most likely to step in. His bat is certainly ready coming off a season as a Pacific Coast League end-of-season All-Star, having hit .303/.409/.493 with 16 homers in 109 games for Fresno. His arm earns the above-average grades that could help with a move to the hot corner, but as of now, the 22-year-old has only 82 2/3 innings of Minor League experience at the position. Garcia, by contrast, doesn't have any Minor League time at third and focused exclusively at short during his time in the recently completed Arizona Fall League.

Letting Rendon go shouldn't be treated directly as an endorsement of Kieboom's abilities to claim third base as his own in the nation's capital, and if the Nats chase Donaldson or Moustakas, that could say plenty about how they view Kieboom's home as more up the middle. But if none of the big free-agent options come to Washington, don't be surprised to hear the No. 20 overall prospect's name more this winter.

Braves targeting pitching? The strength of the Atlanta farm has long been its arms, and the world got a taste of why that was when Mike Soroka became an NL Rookie of the Year candidate this season and Max Fried solidified his place in the club's long-term plans. But the depth hasn't quite worked out the way the Braves would have liked with Kyle Wright, Bryse Wilson and Touki Toussaint failing to stick in the rotation. Now, Atlanta is expected to be in the running for starting pitching help with MLB.com's Mark Bowman mentioning Bumgarner, Zack Wheeler and Wade Miley as options. Even with the potential departures of Dallas Keuchel and Julio Teheran, more solid starting pitching help would be another hurdle to Wright and Wilson's starting hopes, and there could be another logjam at Triple-A Gwinnett, where Ian Anderson and Kyle Muller are also likely to open 2020.

Twins pitchers: Kyle Gibson, Jake Odorizzi and Michael Pineda are all up for free agency this offseason. Combined they made 85 starts and tossed 465 innings for the AL Central champs in 2019. Those are a lot of innings to make up, and despite not having the deepest pockets in baseball, expect Minnesota to be tied to every starting pitcher not named Cole or Strasburg. But there is the chance the Twins leave an opening for Brusdar Graterol as well. Minnesota's No. 3 prospect got a taste of the Majors in 2019 in a relief capacity, averaging 99 mph on his fastball. While his stuff plays up in a reduced role, Graterol has been groomed as a starter during his time in the Minors, and his electric stuff, which also features a plus slider, should be adequate there. Health is the biggest question with a shoulder impingement limiting the 21-year-old to 61 innings in the Minors this summer, and it might be too much to ask to assume he can jump into the Major League rotation. Expect Minnesota to try to sign (or even re-sign) two solid Major League options -- Odorizzi was extended a qualifying offer -- but if the fifth spot looks like a swingman or placeholder, then that could be a positive sign about their 2020 plans for Graterol.