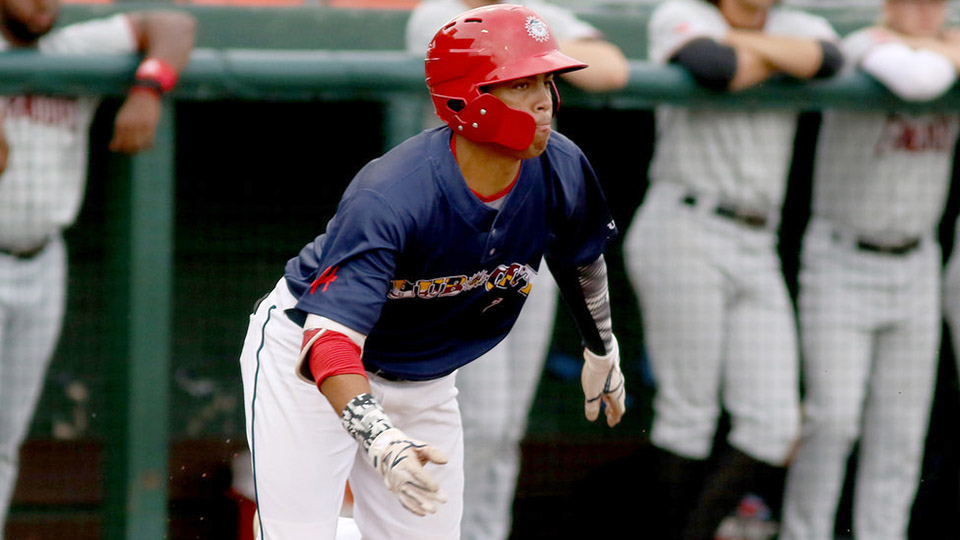 This should sound familiar. The Nationals have moved a teenaged prospect to a higher level much sooner than people outside the system expected.

In 2017, they were aggressive with Victor Robles, who began the season as a 19-year-old at Class A Advanced Potomac and ended it as a 20-year-old in the Majors. Through the first half of 2018, Juan Soto has become a historically great teenage phenom, having climbed from Class A Hagerstown to his spot as Washington's starting left fielder.

The Nationals promoted their No. 5 prospect from Hagerstown to Potomac on Wednesday. That was after he was already the youngest player on an Opening Day roster in either Class A league. That was after he turned 18 on May 16. That was two years and two days after he signed for $1.3 million out of the Dominican Republic. In fact, when he made his Carolina League debut by taking shortstop in the first inning of Potomac's home game against Salem on Wednesday, Garcia became the first player born in the year 2000 to play at the Class A Advanced level.

"For us, it comes down to three different parts," said Nationals director of player development Mark Scialabba. "From the physical part, is he handling the league? Is he showing consistency in the field and at the plate? From a mental standpoint, is he handling failure well? Is he making the adjustments to limit those failures? And then emotionally, is he able to handle the challenges that come both on the field and off the field? Once he ticks all those boxes, that's when we think a player is ready for the new challenge."

This isn't the first time the Nats have handled the 18-year-old infielder aggressively. After signing as MLB.com's No. 13 prospect of the 2016-17 international class, Garcia skipped right over the Dominican Summer League to make his pro debut in the Gulf Coast League last summer. Despite being the same age as most American high school juniors, he held his own in the complex circuit, finishing third in the GCL with 60 hits while hitting .307/.330/.387 over 49 games. It wasn't a perfect year by any means -- with one homer in 211 plate appearances, Garcia didn't show much power -- but even shortly after Washington prospects arrived at West Palm Beach for Spring Training, the organization voiced excitement about seeing what Garcia could do at a full-season affiliate, namely Hagerstown.

"There's a maturity in everything he does," Scialabba said. "It's an advanced feel to hit that really gets him noticed. But from the day he signed, [vice president of international operations] Johnny DiPuglia and his staff did a great job of identifying him as someone who could make some early improvements on both sides of the ball. He works those into games, and that's [how] we get where we are now with him."

It was still a process, however. As is the case with many young players heading north from Florida or Arizona to begin their first full Minor League season, Garcia had to adjust to more than just Class A-quality pitching.

"Early on, I think it was probably the first time he ever had to wear a jacket at any point during a baseball game," Scialabba said.

Whether it was the cold or the jump in level, Garcia clearly struggled in April with the Suns. He hit just .198/.255/.220 over 23 games that month. He had one extra-base hit (a triple) in that span and totaled just three multiple-hit games.

Garcia, however, started to warm up with the weather. He hit his first Class A homer on the first day of May and never looked back. From May 1 to his last game with Hagerstown on July 3, the left-handed slugger produced a .341/.371/.483 line with three homers, three triples and 14 doubles. His strikeout rate, which had been 17.2 percent in April, dropped to 14.3 percent in that 55-game span. Between those dates, only West Virginia's Oneil Cruz (71) had more hits at Class A than Garcia's 70. By the time he was promoted, Garcia had pushed his Class A season average up to .297 and his wRC+ to 109, meaning -- even after the awful April -- he had become a better-than-average bat in the South Atlantic League.

"He was still figuring it out in many ways," Scialabba said. "But he made adjustments at the plate as time went on. It was a matter of attacking the fastball early, not letting good pitches go by, learning the strike zone and hitting the ball where it's pitched -- that was a big one."

That said, it wasn't always a given that Garcia would be moved up at some point in 2018, no matter the Nationals' recent history of pushing their talented teens. No. 6 prospect Yasel Antuna was on a similar track to Garcia -- signed in 2016, good GCL numbers in 2017, starting at Hagerstown in 2018 -- but hasn't managed to catch fire in the same way. Antuna is hitting .206 with a .580 OPS in his own age-18 season. Garcia's promotion means the two won't have to split time any more at the shortstop position. Antuna had gotten the bulk of the innings there over the last three months, with Garcia rotating between short, second base and third base. But Scialabba noted that Garcia will play more short now that he's up with the P-Nats. (It helps that No. 62 overall prospect Carter Kieboom, also a shortstop by trade, was promoted from Potomac to Double-A Harrisburg two weeks ago.)

But even with the glut of shortstop talent across three levels, there was no mandate from on high to spread out the youngsters and move someone by the midpoint of the season. The Nats claim they kept the focus on the players individually, not on the depth chart.

"There was no set date, really, or anything like that," Scialabba said. "But after the All-Star break, you could see the way [Garcia] continued to grow. He was showing improvement but being consistent almost at-bat to at-bat at that point. Really, it got to the point where he pushed it on us, more than anything."

As quickly as Garcia is progressing, he's still not quite at the talent level of Soto or Robles. The hit tool has been strong, but he could still stand to show more pop from the left side as he matures. His speed is close to being plus-plus, which helps on the infield, but with eight thefts in 13 attempts this season he hasn't turned into a major basestealing threat yet. He may not stick at shortstop, and if down the road he moves to third -- where his plus arm would play -- there will be a bigger emphasis placed on his bat. The overall package is certainly enticing, but he's not an elite prospect quite yet.

Still, Garcia's quick and continued ascension recalls a moment that went viral earlier in the season. Soto was making his first Major League start for the Nationals at home against the Padres on May 21 -- he debuted the day before as a pinch hitter -- and to celebrate the 19-year-old's milestone, the organization streamed the game for its young players at the complex in the Dominican Republic. Soto stepped up for his first at-bat against left-hander Robbie Erlin in the second inning and sent the first pitch he saw over the wall in left field for his first Major League home run. The Nats prospects watching the stream, teenagers like Soto and Garcia, went properly berserk for a player who had been quite literally in their place not long before going deep on the game's biggest stage.

Tweet from @chelsea_janes: The Nats put tonight���s game on for their youngsters at their academy in the Dominican Republic. If you thought this crowd went wild when Soto homered... well, this is pretty special. pic.twitter.com/SKROdB2oox

After these past two months and this week's latest transaction, it might not be too long before a similar celebration is taking place for Garcia.

"It's certainly inspiring," said Scialabba. "Certainly with the players that have come up, these guys see that, and they know they have a chance, a real chance to be part of a championship culture. If they do well, they're going to have a chance to impact our club. They've seen that with their teammates and guys that are really still their peers. ... This whole process of international development is a strong part of we are as the Washington Nationals. We believe in scouting and developing these guys, and it's starting to bear fruits. It's an exciting time in this market because of these guys."