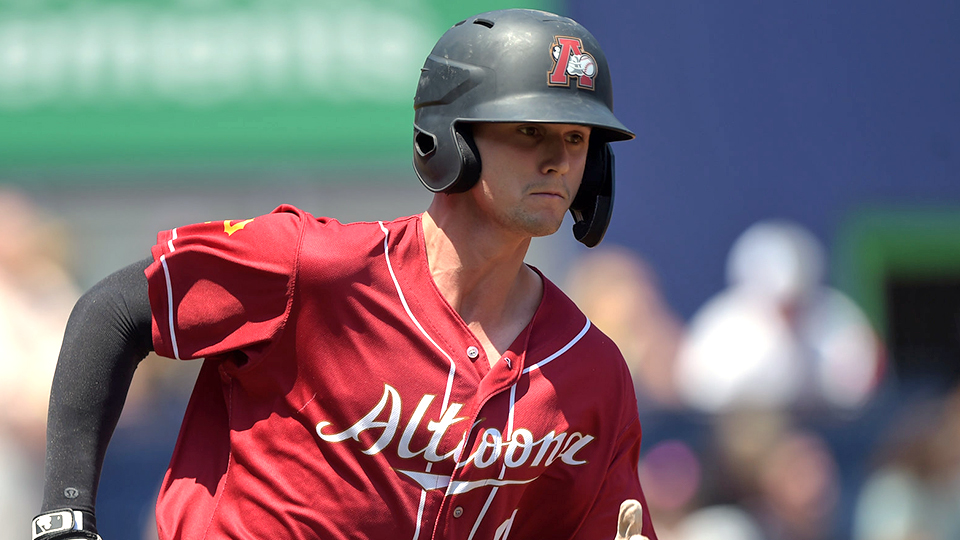 Jared Oliva has produced a career .762 OPS over three seasons in the Minor Leagues. (Kevin Pataky/MiLB.com)

For six years or so, dating back to his days at the University of Arizona, Jared Oliva has kept a baseball journal. Documenting his progress, he records every at-bat after each game as a way to decompress from the day's events and help him remember the good times and bad. Quality at-bats are designated with a Q. Hits get stars. He also marks down goals for the next day.

On June 1, however, his entry was simple. It read: "New season."

"I wasn't getting the necessary extra work in," Oliva said of his first two months with Double-A Altoona. "I've always been big on believing that it's the work before the game that matters more, and I was getting too caught up in the results. So on that day, I shifted my focus on what I could do before the game and would log that in the journal, made some mechanical changes and tweaks with my hitting coach and from June 1 on, I've felt more like myself."

Since that date, the Pirates' No. 9 prospect hasn't just been himself, he's been one of the most productive hitters at the Minors' second-highest level. Over 39 games since the start of June, Oliva leads the Eastern League with a .338 average, 74 total bases and a .423 on-base percentage. His .944 OPS ranks second, and his 48 hits are tied for third -- all of this from a 23-year-old center fielder who finished May with a .201/.296/.299 line through 38 games and missed 11 days in April with a concussion.

To understand what makes this run even more special for Oliva, one has to delve deeper into his history.

Oliva first became Draft-eligible in 2013 coming out of Valencia (California) High School but didn't garner much notice, considering he only received 60 at-bats as a senior. With his father, Dave, reaching Double-A in the Red Sox system in the early 1980s and his uncle Steven playing four seasons for Braves affiliates in the '70s, the younger Oliva remained convinced he had a future in the family business. College scouts also saw enough out of his right-handed stroke and plus speed to offer him a chance to work out at the University of Arizona, and he eventually chose to walk on with the Wildcats and redshirt his freshman year.

Because of the redshirt season, he was Draft-eligible as a sophomore in 2016 -- the year Arizona finished as College World Series runners-up -- but a .239/.294/.380 line wasn't enough to convince organizations he was worth a pick. Following a second trip to the summer Northwoods League, Oliva broke out as a junior in 2017, hitting .321/.385/.498 in 59 games. A pick this time was all but assured, and he told his then-advisor that he would be willing to sign with whatever team was the first to offer him a selection. The Pirates came calling in the seventh round and signed him for the exact slot bonus of $200,000.

No more fighting for time. No more trying out. Oliva was a full-time ballplayer.

"It's still there, and it's really a core value of who I am, that walk-on mentality," he said. "The reason I got to where I was even back then was all that extra work, and that's what I've been trying to get back to. I want to make sure that never leaves me because it gives me an edge over all these other guys. I've always realized the talent I have to hit and to show that power-speed combination, but I've never been entitled to anything. Not starting in high school, some guys would have quit right there. Baseball was always going to be the path for me. It's something that made sense to me."

It didn't take long for the 6-foot-2 outfielder to show he belonged in the pros. The Bucs opened him at Class A Advanced Bradenton in his first full season in 2018, and he was namd a MiLB.com Pirates Organization All-Star after hitting .275/.354/.424 with nine homers and 33 stolen bases. That combination of a decent bat and plus speed made him a prospect to watch in the Pittsburgh system as he opened 2019 in the upper half of MLB.com's top-30 rankings for the group.

The 2019 campaign got off to a rough start, however, when Oliva suffered the head injury during the season opener with Altoona on April 4 after diving for a fly ball, only to slam into the legs of left fielder Bralin Jackson. He returned April 15 after an injured-list stint but couldn't quite get going in his first two months with the Curve. His .595 OPS would have been fifth-worst in the Eastern League on May 31 had he not just fallen short of the qualified list.

It's not hard to see why he wanted June 1 to mark a new season.

"We literally started as if it was Day 1," Oliva said. "We teed things up and started working on hitting balls to second base, focusing on things like barrel control, body awareness, all these little terms that could help. Then, we moved to line drives up the middle. Now, focus on rhythm and timing. My foundation wasn't stable for the first two months, but now by building myself back up, I have that idea on what I need to do each day to give myself the best shot when the game comes around."

Among the mechanical changes Oliva worked on with Altoona hitting coach Jon Nunnally was narrowing his hitting stance and allowing himself to be freer in the box. The anxiety of his results-based approach in April and May had led to a stiffer approach at the plate, which wasn't helping Oliva turn things around.

The numbers also back up the outfielder's foundation-building, up-the-middle approach. In 2018, he was more pull-happy, hitting only 20.3 percent of balls to the center of the field (compared to 50.8 percent to left and 28.9 percent to right). In 2019, that center percentage is up to 27.4 percent while the pull is down to 47.4 and the opposite-field is 25.1. It might not sounds like a lot in terms of percentage, but a quick look at his spray charts from those seasons reveals a more well-rounded approach at the plate.

With all of these recent improvements, Oliva is looking more and more like a potential Major League option. His speed and previously average bat were enough to make a fourth-outfield spot his likeliest course, but if he can maintain this growth at Double-A, he could hone in on an impactful role in the Steel City. It doesn't hurt his case that he plays for an organization that typically relies heavily on homegrown talent. In fact, the Bucs have given the fourth-most plate appearances to rookies in 2019 with 815, behind only the Blue Jays (1,209), D-backs (993) and Tigers (940). Oliva even mentions that he and his Curve teammates watched the Home Run Derby with keen interest, knowing full well that Josh Bell had been in their shoes four years earlier. Impressive seasons by former Pirates prospects Bryan Reynolds and Kevin Newman have only added to the belief that productive players in the Pittsburgh pipeline will get their chance to succeed some day at PNC Park.

And when that day comes, what a journal entry it will be.

"I hope they know my story of how I got here and how it defines my character," Oliva said. "Not everyone in Double-A was a high-school star. My path was a little different, and that's what separates me. Sure, I want them to know that I'll always be running hard around the bases, trying to be a factor in the box, running balls down in the outfield. I want to do all those things to impact the Major League team some day, and I'm going to give my all to make that happen. But first and foremost, I want the organization and the fans to know who I am. The more I keep playing, the more I can show them. Come to a ballgame, see me play, let me show you who I can be."