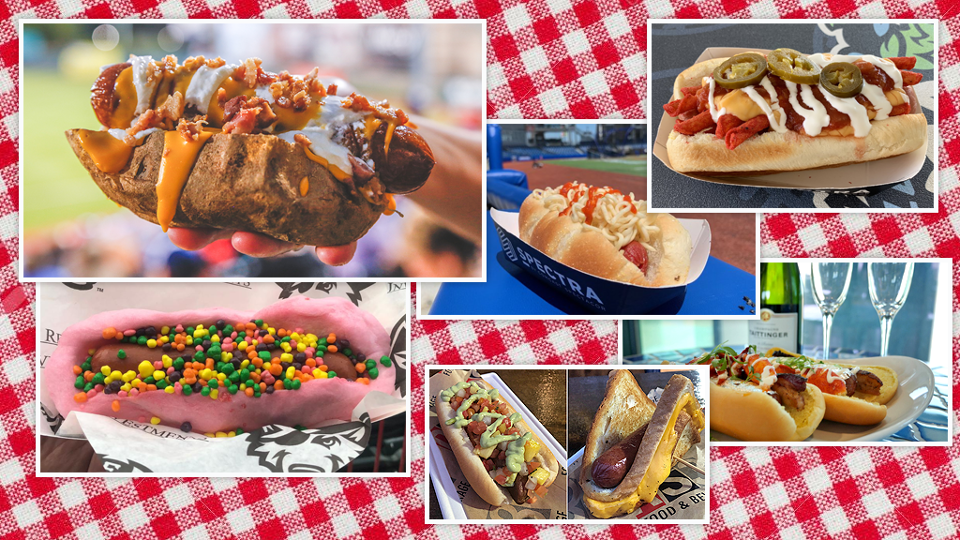 Let's be frank: #NationalHotDogDay calls for a celebration of the most mind-blowing and gut-busting hot dogs in Minor League Baseball. We've surveyed concession menus from across the country in search of the most creative non-sandwich (or maybe technically sandwich?) sausage-in-bun arrangements around.

Some of these clubs have been serving their wild takes on the weenie for quite some time; others have needed a season or two to ketchup.

Let's start in Springfield, where the Double-A Cardinals have taken the concept of the potato bun to a whole new level -- and a literal one. Debuting this year, their Jumbo Spud Dog is served in a split baked potato and topped with nacho cheese, sour cream and bacon. Comes with a spork … but pshhhh:

Here's a favorite for the I-put-bacon-on-my-bacon crowd. The Richmond Flying Squirrels' Bacon Me Crazy Dog is a hot dog wrapped in bacon and covered in crumbled bacon pieces. You know what it could really use, though? A little more bacon flavor. Oh, wait... the bun comes "smothered in bacon-onion marmalade."

The Round Rock Express have a pair of world-beating wieners. Some fans love to give their taste buds a trip to tropical climes with the Kahuna Dog, which is a six-inch hot dog topped with avocado, pineapple mustard and spicy mango salsa.

Others, perhaps the more philosophical types, can't resist complicating the sandwich vs. not-a-sandwich debate with Round Rock's Grilled Cheese Dog, which is a halved six-incher swaddled in a grilled cheese sandwich.

The Erie SeaWolves came up with a pretty sweet idea last summer: what if, instead of a bun, you could eat a hot dog wrapped in cotton candy? Initially intended as a one-night-only offering, the confectionery comestible for carnivores went viral and, as a result, has become a regular concession item.

The SeaWolves also grabbed media attention with their Mojo and AC Rocket Dog, which is practically a barbecue unto itself. The dog is topped with pulled pork, bacon and mac & cheese.

Video: The SeaWolves show off the Mojo and AC Rocket Dog

Last season Johnson City concocted the Ben's Blog Dog to honor a certain MiLB.com writer. Loaded with Polish sausage, pulled pork, bbq sauce, nacho cheese and jalapeños, the specialty frank covers many food profiles. And while it is not #glutenfree, Ben's Biz has plenty of loyal followers and Designated Eaters who can devour the Cardinals' creation for him.

The Hillsboro Hops are named after the key ingredient in beer. And what goes best with beer? Hot dogs. So it's no surprise the Hops love brewing up some unique links. For College Night this year, Hillsboro was inspired by a dorm room staple: Ramen noodles. Top it with some Sriracha and you're good to go:

Baseball, hot dogs, apple pie… go together in the good 'ole Northwest League. The creative juices continued to flow this Fourth of July when the Hops combined the two most American delicacies:

Lastly, Hillsboro honored their Copa de la Diversión identity with the Soñadores dog. While the name means dreamers, this frank is nothing close to a snooze. Piled with Takis, jalapeños, nacho cheese and sour cream, this dog brings a taste of Mexican and American cuisines to, hopefully, a plate near you.

Who loves orange soda? Apparently the Charlotte Knights mascot, who got his own hot dog named after him with the Homer's Citrus Dog. This refreshing frank is a Sahlen's all-beef hot dog layered with slow-smoked beef brisket and smothered with an orange soda slaw, green onions and horseradish sauce. One bite will surely make you say, "I do, I do I dooo."

Followers of the "bigger is better" philosophy will want to book a trip to Pensacola, where the Double-A Blue Wahoos are filling fans' faces with the aptly named Big Kahuna Dog. Wash down this footlong delight (topped with avocado cream, mango salsa and sweet pineapple mustard) with a lemon or key lime milk shake? If you insist.

Of course, no hot dog compilation would be complete without an entry or two from the pork-minded Lehigh Valley IronPigs. Behold their Dutchy Dog -- a jumbo all-beef hot dog topped with creamy mashed potatoes and sauerkraut -- and Not Your Cozens' Hot Dog -- a bacon-wrapped hot dog topped with BBQ pulled pork and candied jalapeño named after slugger Dylan Cozens: