System sent Dubon, Grisham, Hiura up to Milwaukee in 2019 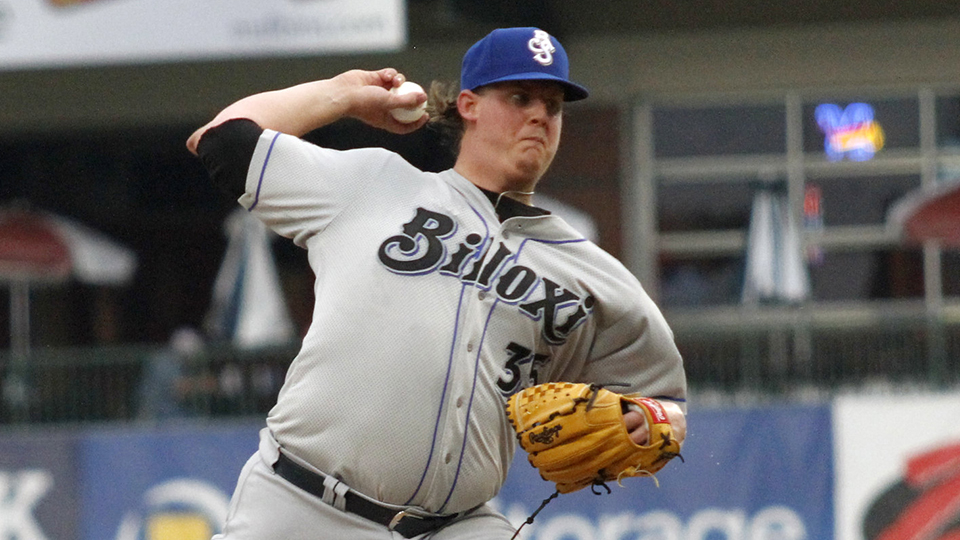 Trey Supak was named Southern League Pitcher of the Year after he was promoted to Triple-A. (Ed Gardner/MiLB.com)

If you want to learn about the future of the Milwaukee Brewers, look no further than Triple-A San Antonio manager Rick Sweet. During the 2019 season, the 67-year-old skipper saw plenty of top prospects come through or stay with the Pacific Coast League team.

Keston Hiura, Mauricio Dubon, Trent Grisham and No. 11 Brewers prospect Trey Supak were among those who put on the Missions uniform this season, all of whom either went on to star for the big club or help Sweet's team finish 20 games above .500.

Yet the Missions' didn't hoard all the talent in the loaded organization. In fact, five affiliates are represented on this year's Organization All-Stars.

Here's a look at who made the cut:

Catcher -- David Freitas, San Antonio (85 games), Milwaukee (16 games), Tacoma (six games), Seattle (one game): Acquired from the Mariners in an April trade for left-handed pitcher Sal Biasi, Freitas did nothing but rake for the Missions during his 85-game stay in the Pacific Coast League. A .381 average and .461 on-base percentage between San Antonio and Tacoma in the Mariners organization led the circuit -- and the veteran was just as good behind the plate, allowing five passed balls in 50 games.

"He has a game plan that, before the game, he goes through in batting practice and his pregame work that puts him in a position to go out and have success on the field," Sweet said. "He was amazing all year with his quality at-bats, so offensively, that's why he had such huge numbers for us.

"His arm strength is average at best, but he makes up for it with quick feet and accurate throws to hold runners. He's been around the game a long time and learned his strengths and weaknesses are, and he uses them well."

First baseman -- David Fry, Wisconsin (134 games): It's unlikely that a combination of Spotted Cow and cheese made the 23-year-old play so well for the Timber Rattlers this season, but if he consumed any of those two, it didn't seem to hurt. The 2018 seventh-round pick had no trouble adjusting to his first full season at the Class A level. He batted .258/.329/.444 with 17 dingers, a Midwest League-leading 41 doubles and 70 RBIs. Fry also topped the circuit in total bases (224) and extra-base hits (59).

"I've done this a long time and I put him in a very special category offensively," Sweet said. "The ball comes off his ball differently. He has a plan on hitting, he knows what that plan is and he doesn't deviate for such a young guy that has very little professional experience. He is definitely ahead of the game."

Hiura's fielding, as Sweet pointed out, will have to improve. His fielding percentage in 46 games at second base for the Missions was .971.

Third baseman -- Weston Wilson, Biloxi (127 games): In his first full season at the Double-A level, the Clemson product brought the power, exploding for a career-high 19 homers and 58 RBIs. He added three triples, 19 doubles and 70 runs scored, which tied for second in the Southern League. At 6-foot-3 and 215 pounds, Wilson provides versatility as he played at least five games at six different positions for the first- and second-half South Division champions.

Shortstop -- Mauricio Dubon, San Antonio (98 games), San Francisco (28 games), Sacramento (25 games), Milwaukee (two games): While Dubon was traded to the Giants for pitchers Drew Pomeranz and Ray Black at the July 31 deadline, he ripped it up for the Missions and Brewers before being shipped off. After missing part of last season with a knee injury, the 25-year-old put up a .297/.333/.475 line for San Antonio with 16 homers, 22 doubles, 47 RBIs, nine stolen bases and 59 runs scored.

"Dubon has matured offensively," Sweet said. "There is no doubt that he figured it out early this year. He was swinging [the bat] good last year before he had the knee injury, which set him back. He came out slow this year, but once he started getting to full speed and his lower half working for him … He's going to be a very good offensive player at the Major League level with some power. He doesn't have Keston power, but he definitely has power that will help him at the Major League level."

Trent Grisham -- Biloxi (63 games), Milwaukee (51 games), San Antonio (34 games): Whether it was Texas, Wisconsin or anywhere in between, the bat traveled for Grisham this season. Let's focus on what he was able to accomplish in his six-week stint in the PCL: .381 average, 13 homers, eight doubles, three triples, 30 RBIs and 37 runs scored. Yes, there was a reason the Brewers were eager to get him in the lineup. He even hit for the cycle on July 30 against Sacramento.

Sweet would have liked more time with Grisham in San Antonio.

"He came to us after he had a great Spring Training -- I was hoping he would make the Triple-A team out of the spring -- but they wanted him to go back to Double-A and prove that he deserved to go to Triple-A, and he did that," the manager said. "He came to us and he just kept improving.

"I was really impressed with his approach, and his strike [zone] command is better than most of the other guys. He controls the plate, the strikes and balls, he takes his walks and has developed his style of hitting, which is what we like to see at the Major League level. He doesn't strike out a lot, and that's because he makes pitchers throw him strikes. He has power to all fields."

Cooper Hummel -- Biloxi (129 games): The adjustment from Class A Advanced to Double-A is supposed to be one of the more difficult in the Minor Leagues. The 24-year-old took it all in stride. He hit .249/.384/.450 with 17 dingers, eight doubles, five triples, 56 RBIs and 62 runs scored -- ranking second in the Southern League in on-base percentage and fourth in OPS -- while showcasing an ability to play different spots in the outfield. Combined, his fielding percentage was .973 with four errors in 150 total chances.

Carlos Rodriguez -- Rocky Mountain (36 games), AZL Brewers Gold (seven games): Meet Mr. Rodriguez, only 18 years old and already making a name for himself in the system as its No. 19 prospect. The Venezuela native batted .329 with three homers, a triple, four doubles, 13 RBIs and 25 runs scored. More impressively, he struck out only 22 times in 173 at-bats. Remember, he's 18, so his best is still ahead of him.

Right-handed starter -- Trey Supak, Biloxi (20 games), San Antonio (seven games): Southern League foes were happy to see Supak get the promotion to Triple-A in July after he posted a 11-4 record, 2.20 ERA, .192 opponents' average and 91 strikeouts over 122 2/3 innings in 20 starts for the Shuckers. While he struggled a bit after arriving in the PCL, Sweet sees what makes Supak so sought after and what should make him a more productive pitcher.

"I'll be honest with you, he's a strike-thrower and he needs to learn how to expand the zone a little bit and pitch more off the plate," the former big league catcher said. "The one thing I saw when he came up from Double-A was there were times where a ball was hit and he sort of looked at it like, 'How was that hit?' That's what happens when you go to a different level.

"He's a command guy who, for me, threw too many pitches in the middle of the zone and he needs to pitch to more of the edges. It is a good thing because we are usually trying to get guys to throw more strikes."

Left-handed starter -- Aaron Ashby, Carolina (13 games), Wisconsin (11 games): Win the Robin Yount Performance Award as the top pitcher in the Brewers' farm system, you've pretty much got a spot as an Organization All-Star. The seventh-ranked Brewers prospect piled up 135 strikeouts in 126 innings across two levels while holding opponents to a .222 average and posting a 3.50 ERA. He also was named a Midwest League midseason All-Star.

"He really progressed in his first full professional season, showing the ability to miss bats," Brewers vice president of Minor League operations Tom Flanagan said in announcing the Yount Award. "His advanced feel to pitch, along with the quality of his pitch repertoire, will continue to help him find success as he progresses through the system."

Relief pitcher -- Nate Griep, Biloxi (43 games), San Antonio (one game): When Griep came out of the bullpen, it was pretty much lights-out for the other team. Selected in the eighth round of the 2015 Draft out of Kansas State, he had a 1.92 ERA while striking out 57 over 56 1/3 innings. The 26-year-old was particularly difficult against right-handed batters, limiting them to a .169 average. He led the Southern League with 22 saves and has converted 109 of 126 chances since making his full-season debut in 2016.