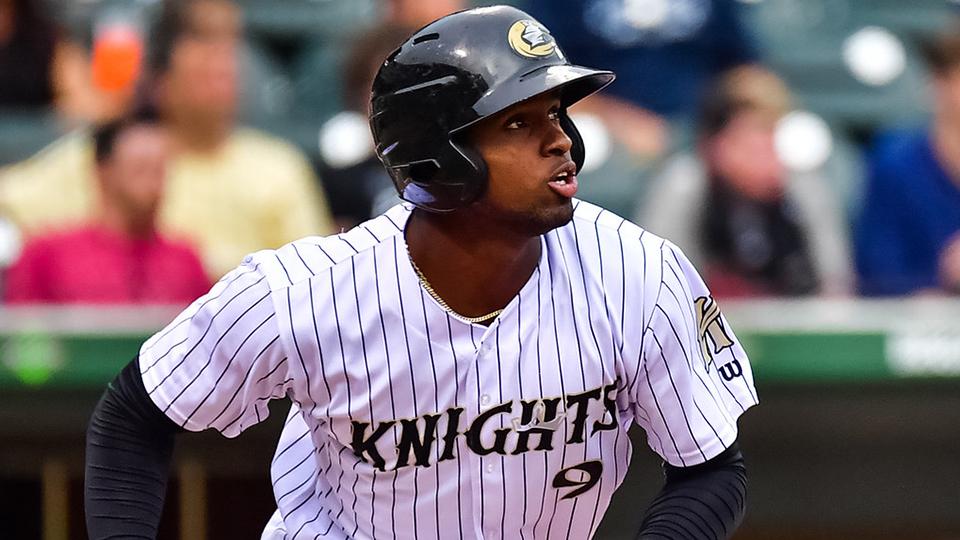 Luis Robert produced a .974 OPS in 47 games with Triple-A Charlotte this past season. (Laura Wolff/Charlotte Knights)

SAN DIEGO -- The White Sox have signed Yasmani Grandal. They've traded for Nomar Mazara and brought back Jose Abreu, first with a qualifying offer and then with a three-year deal. Chicago, which hasn't enjoyed a winning season since 2012, is adding pieces for a run at contention next season.

As it happens, one major piece the White Sox plan to add is already in the pipeline -- No. 3 overall prospect Luis Robert. Robert's status as a five-tool prospect and his proximity to the Majors as a player who finished 2019 at Triple-A should make him one of Chicago's key additions next year, regardless of who else the Sox sign or trade for this offseason.

"Certainly," he said Tuesday. "Skill set alone and some of the strides that he's made over the course of the last year speak to that."

Robert put himself in position to become a Major League question with a dominant campaign, one that earned him the MiLBY award for Top Offensive Player. Along with the Astros' Kyle Tucker, he was one of two 30-30 players in the Minors, finishing with 32 homers and 36 stolen bases across Class A Advanced Winston-Salem, Double-A Birmingham and Triple-A Charlotte. He posted a .328/.376/.624 line in 122 games, and his 170 wRC+ ranked second among full-season qualifiers. The 22-year-old right-handed slugger did all of that while playing primarily in center field, where he notched seven assists.

Above-average hit tool. Plus power. Plus-plus speed. Good defense. That would seem to add up to a Major League player. But before Renteria pencils Robert into the center field spot on the South Side ahead of Leury Garcia or Adam Engel, he wants to get some live looks, especially since this was Robert's first really full season after thumb, ankle and knee injuries limited him in 2018.

"Beyond the video that I watch, I'd like to see him this spring," Renteria said. "I think this is going to be a big spring for Luis. I think his skill set is obviously high-level. He can do a lot of different things. I know that one of the biggest things we were concerned about was keeping him on the field, doing the at-bats, playing in the field, doing baseball things. So I think he is improving. He is a young man that can make leaps and bounds."

There's also the matter of starting Robert's service time clock. The White Sox got around that last spring by signing former top prospect Eloy Jimenez to a six-year, $43 million deal before the season started, allowing him to jump straight to the Majors. Having signed initially for $26 million out of Cuba, Robert may have fewer reasons to sign a get-paid-now contract, meaning his big league debut could be delayed until later in April so the White Sox can push back his free agency an extra year. But if they choose to do what the Mets did with Pete Alonso or the Padres did with Fernando Tatis Jr., Robert could be up by Opening Day. That would allow the White Sox to get a full year out of him at a time when they'll need every win to catch the Twins and Indians in the American League Central.

But because of that willingness to go for it in 2020, Renteria said prospects will have to clear a higher bar if they're going to reach The Show.

"Now the conversation is a little different," he said Tuesday. "We left the season last year, last series of the year, talking about this year and what we would expect and what were the things we wanted to do. Obviously, win more games and be part of a relevant season [were two]. We're going to ask a lot of these guys. I think it's time."

Then again, if there's anyone who believes Robert can clear such a higher bar, it's Robert himself.

"I think he is a young man that wants to prove to everybody what he's capable of doing at the Major League level," Renteria said. "But we're looking forward to seeing him this spring and seeing where he's at."

Cardinals' Carlson 'doing everything he needs to do': There's no doubt about the Cardinals' position going into 2020. St. Louis emerged from a crowded National League Central and made it as far as the LCS this fall. They plan to make it at least that far next season. Like the White Sox, they also have a top outfield prospect closing in on The Show in No. 24 overall prospect and Breakout Prospect MiLBY award winner Dylan Carlson.

The 21-year-old switch-hitter set career highs with 26 homers and 20 steals and finished with a .292/.372/.542 line in 126 games between Double-A Springfield and Triple-A Memphis. That power-speed combo helped earn him Texas League Player of the Year honors as well as a trip to the Futures Game in July. Over time, the 2016 first-rounder showed increased pop and the arm and range to play all three outfield spots, although he mostly saw time in center field in 2019.

Carlson's ascendance pairs nicely with a potential free-agent departure of Marcell Ozuna, but St. Louis' top prospect faces competition from Dexter Fowler, Harrison Bader, Tommy Edman, Tyler O'Neill, Jose Martinez, Randy Arozarena, Adolis Garcia and Lane Thomas for time on the grass. And that's if the Cards don't make a move for a free-agent outfielder. Carlson's ceiling might be as high as anyone's in the pipeline, but a crowded 40-man roster could work against him -- at least initially, manager Mike Shildt warned.

Video: Carlson cranks one for Memphis

Shildt did add that Carlson made a strong impression in Major League camp last spring and that the California native can expect to be given just as much rope back in West Palm Beach in a couple months. It's a good problem to have a toolsy outfielder knocking down the door for a contender, and it's a problem Shildt looks forward to becoming worse in the months to come.

"There are more factors than just Dylan," the skipper said. "But he's doing everything he needs to do to put himself in the right position."

Padres to take time with Gore, Patiño: The Padres, quasi-hosts of this year's Winter Meetings, boast two of the game's top young pitchers in No. 4 overall prospect MacKenzie Gore and 30th-ranked Luis Patiño. With the club hoping to make a leap in 2020 -- the second year of Manny Machado, Fernando Tatis Jr. and Chris Paddack -- it's worth wondering how soon San Diego could add the pair of 20-year-olds.

On Wednesday, however, new Padres manager Jayce Tingler -- who has experience as a Minor League manager and field coordinator in the Rangers system -- gave a long list of criteria that the left-hander and right-hander will have to meet before the organization deems them Major League-ready.

"I think with those two, it's 'Are they built up to a certain workload?'" he said. "Our biggest responsibility is making sure they're healthy. We don't want to put them in stressful situations when they're not ready to go. Look, pitchers are getting injured all across the industry. We need to do everything under our power to make sure that we've dotted our I's and crossed our T's.

"We're looking for guys that command their fastball in four different quadrants of the zone, that can throw a secondary pitch, whether it's curveball, slider, changeup at any time, specifically when they're behind in the count. We're looking for guys to field their position and to control the running game and manage the game and get through an order two to three times, especially for the young guys. We factor all those things in."

Under those guidelines [as well as traditional standards], Gore looks to be the closer of the two. After dealing with blisters in 2018, the 2017 third overall pick upped his innings count to 101 this season between Class A Advanced Lake Elsinore and Double-A Amarillo. He posted a 1.69 ERA and 0.83 WHIP while fanning 135 and walking only 28, showing the control Tingler mentioned while throwing four above-average pitches in his fastball, curveball, slider and change.

Patiño is known as a little bit more of a hard thrower, topping out at 99 mph at the Futures Game in July. His slider and curveball draw above-average grades as well, although his control isn't quite as pinpoint as Gore's. He put the arsenal to good use by posting 2.57 ERA with 123 strikeouts and 38 walks over 94 2/3 frames between the same clubs as his left-handed counterpart.

Patiño, who made only two regular-season starts with Amarillo, is likely to open 2020 back at Double-A, while Gore is expected to be a candidate for Triple-A El Paso. With both waiting in the wings and the Padres having a weakness in the rotation, few would blame San Diego for altering its short-term pitching plans in anticipation of the duo. That isn't the case quite yet, according to Tingler.

"I don't think it affects it," he said. "Not to speak on what their plans are in Spring Training, but I do know our group thinks what is important is their continued progression and development going forward. Obviously, they're ultra-talented, but we'll rely on a pretty big group up there that will have a lot of eyes on them and doing heavy lifting with them, working with them on a daily basis. We'll trust that group when they're starting to knock on that door and getting close."