Pelicans Welcome Cloonan as Broadcaster for 2020 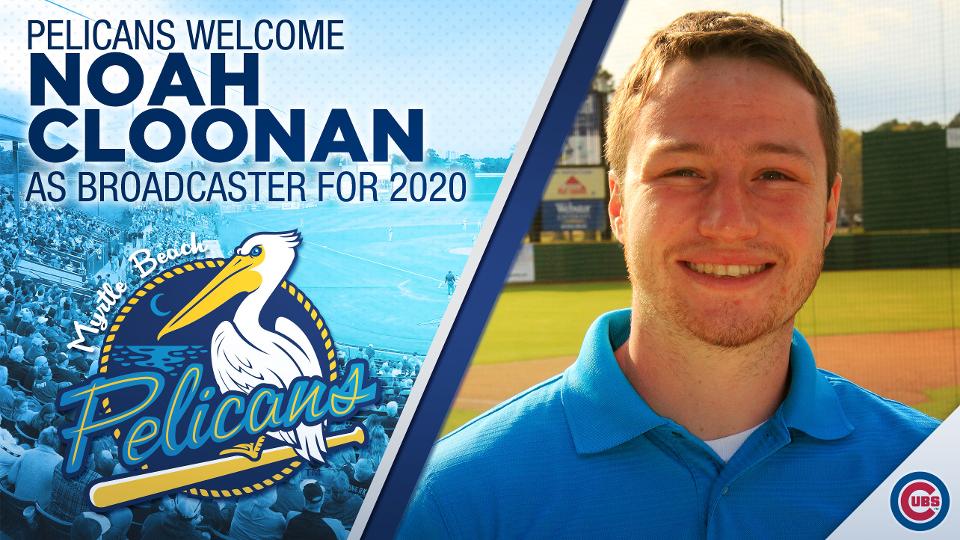 The Myrtle Beach Pelicans are pleased to announce that Noah Cloonan will return to the club's broadcast booth in 2020 as the Media Relations Manager and Broadcaster. Cloonan will serve as the radio "Voice of the Pelicans" for all Pelicans games both at home and on the road, as well as the primary media contact. He will also manage the club's baseball-related content on the website and social media accounts. During the 2019 season Cloonan served under Zach Bigley who was recently awarded the broadcasting position with the Frisco Roughriders, Class AA affiliate of the Texas Rangers.

"We are excited to have Noah return to Myrtle Beach for the 2020 season," stated Pelicans General Manager Ryan Moore. "Historically, Myrtle Beach has been a place where up and coming broadcasters have had the opportunity to really hone their skills in the broadcasting business. We are ecstatic to have Zach Bigley fill the role with our sister franchise in Frisco. He is the latest in a line of former Pelicans broadcasters to move to a full time role with a Class AA team. With his move, Noah was the natural fit to step into the lead broadcasting role with the Pelicans. He did a great job for us the assistant last season and whenever possible we prefer to promote from within. I'm excited to see him step into and grow with this role in 2020."

During the offseason, Cloonan is the voice of the Ashland University men and women's basketball teams on Fox Sports 1340. In 2018, Cloonan was the broadcaster and media relations manager for the Bellingham Bells in the West Coast League, a collegiate wooden bat league in the Pacific Northwest. Before that Cloonan also worked in the Great Lakes Summer Collegiate League as the broadcaster and media relations contact for the Lorain County Ironmen.

The Pelicans return to TicketReturn.Com Field at Pelicans Ballpark in 2020 marks the 22nd season for the franchise and sixth as the Class A-Advanced affiliate of the Chicago Cubs. For more information about the club or season memberships, visit myrtlebeachpelicans.com or call 843-918-6000.