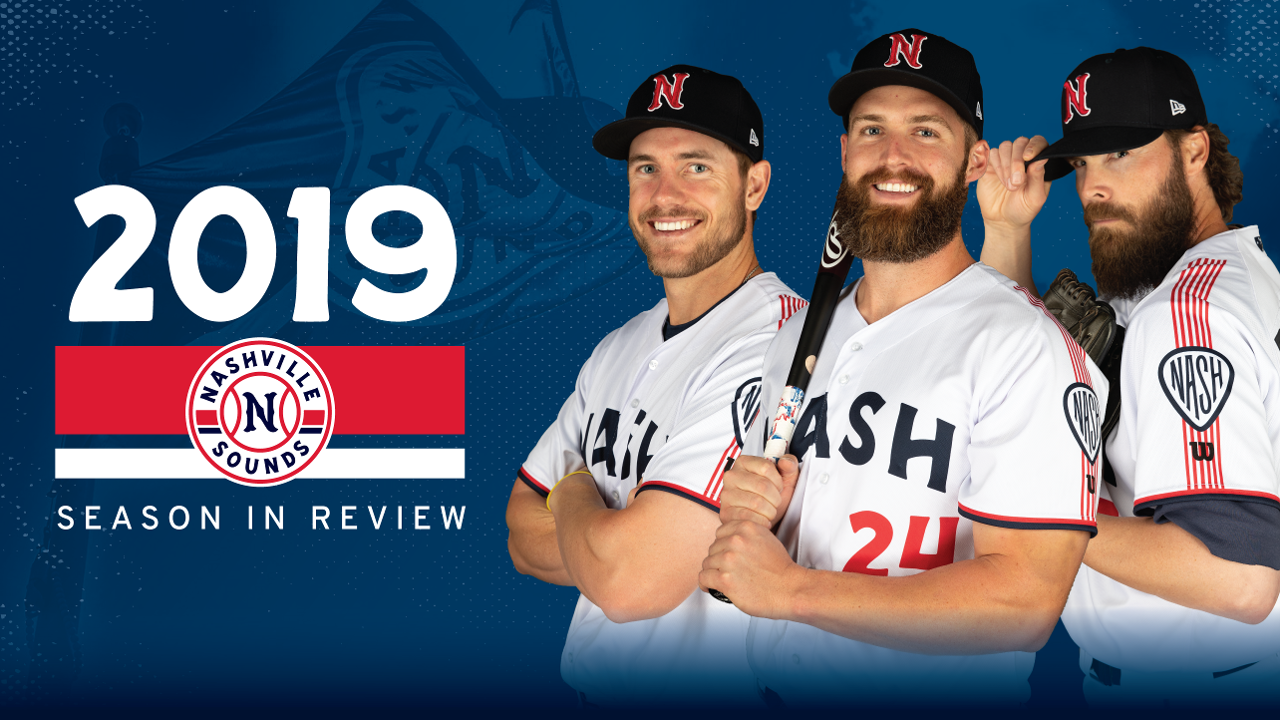 The Nashville Sounds finished the 2019 season with a 66-72 record, good for third place in the Pacific Coast League's American Northern Division. They finished 8.0 games behind the first-place Iowa Cubs. The Sounds spent 91 days in fourth place, 52 days in third place, one day in second place and one day in first place.

First Tennessee Park welcomed 578,291 fans during the 2019 season, the fifth straight year of over 500,000. It's the fourth time in the five-year existence of the park with over 550,000 fans. The average attendance of 8,631 fans per game was the second-highest average in the Pacific Coast League and third-highest in all of Minor League Baseball behind only Triple-A Las Vegas (9,299) and Triple-A Columbus (8,684). First Tennessee Park hosted 23 sellouts, the most in a single season in ballpark history.

A total of 74 players played for the Sounds in 2019, including 43 pitchers and 31 hitters. 10 of the 74 players went from Nashville to Texas for their Major League debut. The list includes pitchers Kyle Bird, Brett Martin, Taylor Hearn, Pete Fairbanks, Phillips Valdez, Locke St. John, Pedro Payano and Brock Burke. The two hitters to make their MLB Debut were Scott Heineman and Nick Solak. Players who were with the Sounds from start to finish were pitchers Tim Dillard and Wes Benjamin, catcher Jett Bandy and infielders Eli White and Matt Davidson.

The Sounds finished the 2019 season with a whopping 254 transactions. The most transactions in a single day occurred on July 11 when the team made 10 different roster moves. 32 of the 74 players who played for Nashville in 2019 also played in the big leagues in 2019.

Nashville played its best baseball down the stretch with a record of 19-9 in the month of August. The 19 wins were tied for the second-most in the Pacific Coast League (Memphis - 22). It's the fourth-highest win total in a single-month for Nashville in the PCL era.

Nashville's longest winning streak during the 2019 season was five games, done two separate times. The team's first five-game winning streak was from June 24-28 when they finished a series with a win over New Orleans and then went on to sweep Memphis in a four-game series. The second five-game winning streak was from August 12-17. The Sounds finished a four-game series with two wins in Sacramento before returning home and winning the first three games in a series against Omaha.

The Sounds played their best baseball in tight games. In contests decided by one-or-two runs, Nashville went 38-26. It was the second-best record in the Pacific Coast League in such games, behind only Round Rock which went 38-25.

Right-handed pitcher David Carpenter was named to the All-PCL Team as the Reliever. The team is selected through voting by the league's managers and media representatives. In 39 games, Carpenter went 2-0 with a 1.63 ERA (38.2 IP/7 ER). He led the league with 21 saves in 22 attempts. Carpenter limited Pacific Coast League hitters to a .213 batting average while racking up 42 strikeouts. He was the first Sound to be recognized on the All-PCL Team since Renato Nunez in 2017, and he is the first pitcher to garner the honor since Jimmy Nelson in 2014.

Infielder/outfielder Patrick Wisdom and left-handed pitcher Joe Palumbo each won a weekly honor from the Pacific Coast League. Wisdom was named PCL Player of the Week for his play from August 5-11. Wisdom hit .435 (10-for-23) with 9 runs scored, 11 RBI, 7 home runs, 1 double, 3 walks and 32 total bases with a 1.391 slugging percentage and 1.891 OPS. Wisdom became the third player in franchise history to hit at least one home run in six consecutive games. Palumbo was named PCL Pitcher of the Week for his play from August 12-18. Palumbo made one start for Nashville during the span and tossed 6.0 no-hit innings against Omaha on August 15. The southpaw struck out seven and walked two in the win. Wisdom and Palumbo became the first pair of Nashville teammates to win back-to-back weekly honors since Caleb Gindl (8/20-26) and Hiram Burgos (8/27-9/3) accomplished the feat in 2012.

Infielder/outfielder Patrick Wisdom was named the team's Fan Favorite choice in 2019 in an online vote. Wisdom played in 107 games and hit .240 (95-for-396) with 68 runs scored, 15 doubles, 31 home runs, 74 RBI and 53 walks. Wisdom's 31 home runs are the eighth-most in Nashville Sound single-season history. Wisdom's power-packed season was highlighted in early August when he hit at least one home run in six consecutive games from August 4-10. He's the third player in franchise history to homer in six straight games.

Left-handed pitcher Wes Benjamin was recognized with the team's Community Service award. Benjamin was a regular in the Nashville Sounds' community appearances. The southpaw took time out of his personal schedule to make multiple trips to Monroe Carell Jr. Children's Hospital at Vanderbilt to visit with patients and their families. Benjamin was a consistent presence in pregame autograph Sundays and participated in youth baseball clinics at First Tennessee Park.

The Sounds had two pitchers lead the Pacific Coast League in a pitching category. Right-hander Tim Dillard led the circuit with 153.1 innings pitched and right-hander David Carpenter led the PCL in saves with 21.

Infielder Matt Davidson drove in a team-high 30 runs in the month of August. It's the second-most runs knocked in by a Nashville player in a single-month in the PCL era (Chad Hermansen, 33 - July of 1999). Davidson's red-hot August included a .340 (34-for-100) average with 17 runs scored, 6 doubles and 9 home runs.

Infielders Matt Davidson (33) and Patrick Wisdom (31) became the first pair of Nashville teammates to hit at least 30 home runs in the same season. The powerful duo joined Seth Brown (37) and Mark Payton (30) of Las Vegas, Jared Walsh (36) and Jose Rojas (31) of Salt Lake, Sam Hilliard (35) and Roberto Ramos (30) of Albuquerque and Yadiel Hernandez (33) and Brandon Snyder (31) of Fresno as teammates in the Pacific Coast League to both hit at least 30 home runs.

Infielder Andy Ibanez had a career-year for the Sounds. The 26-year-old hit .300 (140-for-467) with 91 runs scored, 30 doubles, 20 home runs, 65 RBI and 53 walks. He set new career-highs in batting average, runs scored, total bases (232) and home runs and matched a career-high in hits. The 91 runs scored by Ibanez is the ninth-most by a Nashville player in single-season team history. It was the 12th-highest total in the PCL. He scored 29 of his 91 runs in August, the second-highest amount by a Nashville player in a single month in the PCL era.

Infielder Andy Ibanez and catcher Adam Moore were the only two Nashville hitters in 2019 to drive in five runs in a single game. In a 13-10 win at Sacramento on August 13, Ibanez went 4-for-6 with 5 RBI and in a 10-6 win over Memphis on May 24, Moore went 2-for-3 with 5 RBI. Nashville hitters put together 16 different 4-RBI games, led by Ibanez and Matt Davidson who had three each.

Right-handed pitcher Tim Dillard threw a complete game in a 7-3 win over Albuquerque on August 2. Dillard's complete game was the only one by a Sounds pitcher in 2019. Dillard allowed a one-out, three-run home run in the first inning but faced the minimum 26 batters after the long ball. He allowed a base hit in the fourth inning but got a double play and allowed a walk in the eighth but induced another double play. The nine-inning complete game by Dillard was the first of its kind since Jharel Cotton threw a one-hit, complete game shutout on August 9, 2016 at Round Rock.

Infielder Nick Solak was red-hot in August and produced the second-highest batting average by a Nashville player in a single month in the Pacific Coast League era (minimum 75 PA). He hit .414 (29-for-70) with 15 runs scored, 4 doubles, 5 home runs, 18 RBI and 4 walks. Solak's .414 average in the month of August is second to only Vinny Rottino's .420 average in August of 2006.

Among David Carpenter's league-best 21 saves, seven of those came in the month of July when he went 1-0 with a 0.82 ERA (11.0 IP/1 ER). The seven saves for Davidson in July is the seventh-most by a Sounds player in a single month in the PCL era.

The 2019 pitching staff for the Sounds set several records. As a collective unit, the staff allowed franchise-highs in the following statistics: runs allowed (814), earned runs allowed (732), home runs allowed (175) and hit batters (96). The one complete game thrown by the team in 2019 was also a franchise-low.

May 5, 2019 will go into the Pacific Coast League record book for the Sounds. In an 11-2 loss to Memphis at First Tennessee Park, Nashville pitchers matched a league record by hitting five batters. Right-hander Yoel Espinal hit four batters and Joe Kuzia hit one. It's the fifth time in league history a team has hit five opposing batters, and the first since Oklahoma City vs. New Orleans on May 4, 2015.