Homza gets Dust Devils even in NWL 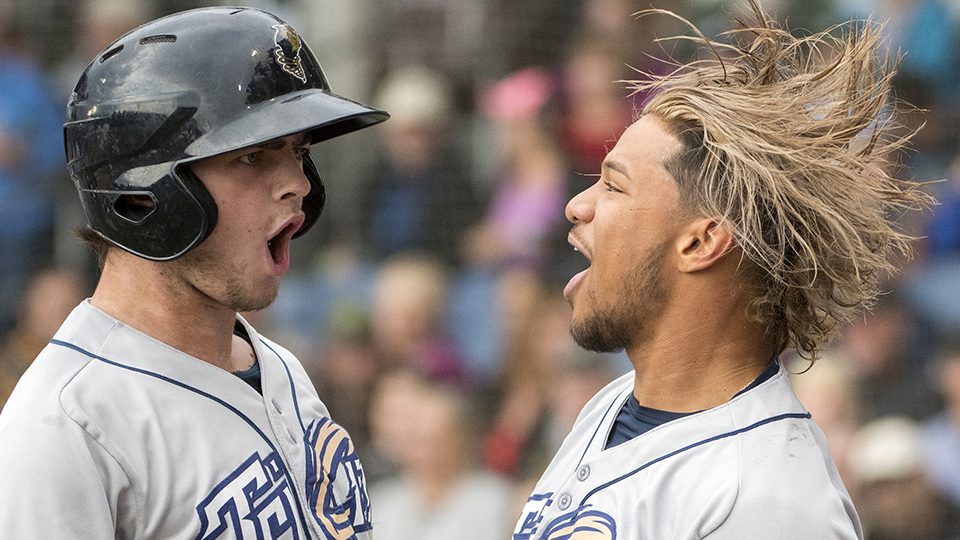 The slam was Jonny Homza's fourth homer since the Padres took him in the fifth round of the 2017 Draft. (Jared Ravich/MiLB.com)

Sunday was a grand night for Jonny Homza and the Tri-City Dust Devils.

After going the entire regular season without a home run, the Padres prospect hit a first-inning grand slam to send the Dust Devils on their way to a 9-1 win over Hillsboro at Ron Tonkin Field that evened the best-of-5 Northwest League Championship Series at one win apiece.

Tri-City jumped on Hops starter Blake Walston, who recorded just one out. Reinaldo Ilarraza led off the game with a single and Jordy Barley and Logan Driscoll walked to load the bases. The The D-backs' No. 14 prospect froze cleanup hitter Kelvin Melean on a called third strike but plunked Jack Stronach to plate the game's first run.

Jacob Stevens relieved Waltson and walked Luke Becker to make it 2-0 before striking out Nick Gatewood. That set the stage for Homza, who dug himself an 0-2 hole. The 20-year-old worked the count full and sent the payoff pitch over the left field fence for his first dinger since Aug. 21, 2018 in the Rookie-level Arizona League.

"I was really excited," Homza said with a laugh. "It felt great to get an early lead. ... It was a great start to the game."

The Dust Devils never looked back as the trio of Connor Lehmann, Jason Reynolds and Sam Keating limited Hillsboro to three hits. Reynolds (1-0) issued one walk over four hitless innings for the win, striking out three.

Beaten in Game 1 on a three-run walk-off homer, Tri-City extended its lead in the fourth when Tre Carter scored on a wild pitch. Carter drilled a two-run homer an inning later to cap the Dust Devils' scoring.

"Today was really important," Homza said, "especially after the first game here. We had played really well that game and they just got the best of us there in the ninth. We were still confident coming into today's game and we're definitely confident coming back home. We know we just need to take two out of three at home, which is really nice."

The series shifts to Tri-City for Game 3 on Monday night.