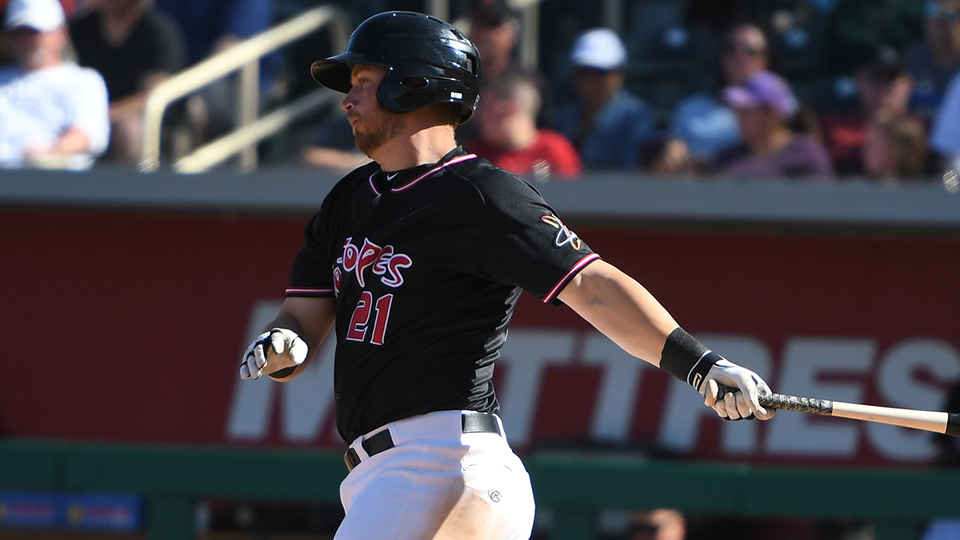 It's been quite the week at the plate for Brian Mundell.

The Rockies' No. 29 prospect went 3-for-5 with two doubles, three runs scored, two RBIs and a walk in his fifth straight multi-hit game as Triple-A Albuquerque cruised to a 12-2 win over El Paso on Saturday night at Isotopes Park.

Mundell hit an RBI double to right field in the first inning off starter Fernando Rodriguez Jr. and took the next pitch he saw from the veteran right-hander to center for another two-bagger in the third. He walked in the fifth and singled to right in the seventh off left-hander Sammy Solis to complete the sixth multi-hit effort in his last seven contests.

During a seven-game hitting streak that began on May 9, the 25-year-old is 16-for-29 (.552) with a homer, three doubles, four RBIs and seven runs scored. He raised his average to an even .400 in 26 Pacific Coast League games, which would put him second behind Round Rock's Yordan Alvarez if he had enough plate appearances to qualify.

"I think it's timing more than anything else," Mundell said.

During the first week of the season, he was talking with Isotopes catcher Dom Nunez about ways to improve his timing at the plate.

"And I started to do a little heel tap right before the pitch would come and then involved with my leg kick," Mundell said. "And ever since I started doing that, I've been seeing the ball really well."

It took time for Mundell to grow comfortable with the change in his in-swing routine.

"There are certain mechanisms that you have to perform with your body when you're doing something different than you've done for the past whatever amount of years," he said. "It's gonna take a little bit of time and a little bit of trusting it."

He started trying it out in games a couple of times before landing on the injured list with an ailing knee on April 27.

"I think the biggest thing is being on time, allowing myself to get to all pitches and be able to put the barrel on the ball on pitches in the zone and have confidence going up to the plate," Mundell said. "Because once you start rolling, you want to get up there and swing at the first pitch and see what happens."

Mundell said he noticed a difference the first game he started using it and got into a really good groove when he returned a week later and became fully invested in the change. The heel tap allowed him to focus on something besides what the pitcher is going to throw, which he said has proved really helpful.

"By taking your mind off thinking about that," he said, "and putting it on 'OK, I just need to heel tap, heel tap, heel tap' and then right when I see my trigger, to lift my leg up, the heel comes down and then my swing is more free-flowing than anything else."

Rockies No. 14 prospect Yonathan Daza went 4-for-6 with a three-run homer in the sixth off Kyle McGrath and a stolen base.

"Daza's the same all the time -- super-aggressive, puts the barrel on the ball more than anybody I've ever seen," Mundell said. "And his confidence is through the roof, and it works for him and I've seen it work for him for the last four years."

Mundell stepped to the plate in the eighth looking for his fourth hit of the game against a familiar face, El Paso second baseman Peter Van Gansen, his teammate at Cal Poly San Luis Obisbo.

"I think we kind of just looked at each other and smiled," he said.

Mundell said Van Gansen threw in the mid-80s, abnormal for a position player on the mound.

"I'm gonna go up there and see if I could hit the first pitch and whatever the outcome is, the outcome is. And just have fun with it," he added.

Mundell grounded out to shortstop on the first pitch.