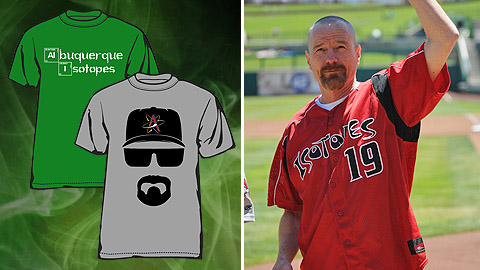 Albuquerque fans may not have recognized him at the time, but Walter White browsed the Isotopes' gift shop during a game in 2009. He bought an Isotopes cap, and if you look closely during a Season 2 episode of Breaking Bad, you'll see the local chemistry teacher sporting his 'Topes headwear.

"They did not ask permission for that," Isotopes general manager John Traub joked. "He bought that at a game, it was the night I met him. He was just hanging out, went into the store, bought a hat and the next thing I know, he ended up wearing it the day he met Saul."

For fans of the acclaimed AMC drama, that all may sound familiar. For those not in the loop, we're referring to actor Bryan Cranston and his genuine love of the hometown Isotopes, the Triple-A Minor League team in Albuquerque, N.M., where he filmed the Emmy Award-winning show for five seasons. Cranston subtly added the Isotopes to his trademark character in one scene, and now his face has shown up at that very same Isotopes souvenir shop.

Or is it Traub?

"There have been people who suggested it looked like me," Traub laughed. "An Isotopes GM shirt."

The shirt in question clearly pays tribute to Cranston's iconic character on Breaking Bad, a high school chemistry teacher who turned into a meth kingpin with the nickname Heisenberg. The character's look in the show -- glasses, a goatee, a black "pork pie" hat -- is delightfully similar to the new shirt the Isotopes have for sale.

Traub made it clear, though, that the Isotopes' newest items aren't specifically Breaking Bad shirts. The team attempted to get official licensing for apparel from Sony, the show's production company, but instead have a shirt that gets the point across and is unmistakable to fans of the series without using any official logos or wordmarks.

"We don't have authority to market the show, so it's not tied directly with the show," Traub said. "The show has really been popular, gaining in popularity over each year, especially this season when the final eight episodes were airing. Everyone was so excited about this show, so it only seemed natural that people would come here, and Bryan came to many games. They hired so many people from this community to help out, there really is a connection with Albuquerque and this show."

The Isotopes, with Traub and Cranston organizing the events, hosted celebrity charity softball games to benefit wounded veterans at Isotopes Park over the years. Many actors from Breaking Bad took part in them, including fan favorites Aaron Paul (Jesse Pinkman) and Jonathan Banks (Mike Ehrmantraut). The 2012 game raised over $26,000 to help wounded vets after the 2011 version benefited Youth Development, Inc. Cranston often came to games and met fans during filming. In fact, Traub said the actor bought a house nearby.

"Bryan is a great guy, a humble guy who wants to give back to our community," Traub said. "He's a huge baseball fan, he grew up a huge Dodgers fan, and the fact that we were a Dodgers affiliate is something that attracted him here. He'd call me at 9 p.m. and say, 'Hey, can I come by?' I'd say, 'Absolutely.' And he'd come watch, we'd hang out -- he was great with the fans, once they recognized him, he was great with autographs. He was coming here to relax and enjoy a baseball game, but he realized so much of the success of the show was the fans, so he was always very gracious with his time."

The Isotopes have two shirts for sale with not-so-subtle references to Breaking Bad -- one depicts a Heisenberg-esque face wearing a black Isotopes cap instead of the character's iconic derby (likely inspired by this official Breaking Bad shirt or maybe this one), and the other is a tribute to the show's opening montage, with the team's name spelled out in the periodic table-themed look of Breaking Bad's logo.

Only made available recently, Traub said they've been hot sellers.

"We've sold a lot to people here, people from all over the county, but more here," he said. "They love our hat, and our merchandise has been popular all over the country since we started, and those orders have continued, but they've picked up over the last month."

Oddly enough, the Isotopes' name was born out of another popular television show, The Simpsons. Traub recalls the story of how an episode of the animated series inspired fans to name the club after Homer Simpson's favorite team.

"Homer went on a hunger strike to protect the relocation of the Isotopes from Springfield. They were going to move to Albuquerque, and he won," Traub said.

In reality, the Calgary Cannons relocated to Albuquerque in 2002 and fans voted -- overwhelmingly, Traub notes, with 150,000 votes cast -- to name the new club the Isotopes.

Both Homer Simpson and Walter White endured their share of never-ending unfortunate events, but Mr. White's journey took a much darker path.

"I told Bryan, 'You should consider wearing something else,'" Traub said in encouraging Cranston to sport more Isotopes garb in the show. "He said, 'This show is getting a little too dark, I don't think you'd want it associated with something that dark.' I thought, the business part of me does! It's been a great relationship though."

That relationship even extended into the Isotopes' clubhouse in 2012 when Brian Cavazos-Galvez, an outfielder and Albuquerque native, was invited to be an extra during a scene in the final season. Traub said the Dodgers prospect can be seen in the background at a Mexican restaurant (episode 511, "Confessions,") when Walter White and his wife, Skyler, have an awkward moment being pitched guacamole and drinks opposite his brother-in-law, Hank.

"We have season ticket holders who have worked on the show," Traub said. "That show really has meant a lot to Albuquerque. The sets, the way it's portrayed in the show, the city became a character in the program."

And with news that a Breaking Bad spinoff is in the works, Traub said he's optimistic that the team can continue its relationship with the actors and story.

"You never know what kind of connections we'll establish and continue what has already begun, but people will be excited about that too," Traub said. "Believe me, with how creative our staff is, somebody will come up with some ideas that will be another home run."

Danny Wild is an editor for MiLB.com. Follow his MLBlog, Minoring in Twitter. This story was not subject to the approval of the National Association of Professional Baseball Leagues or its clubs.