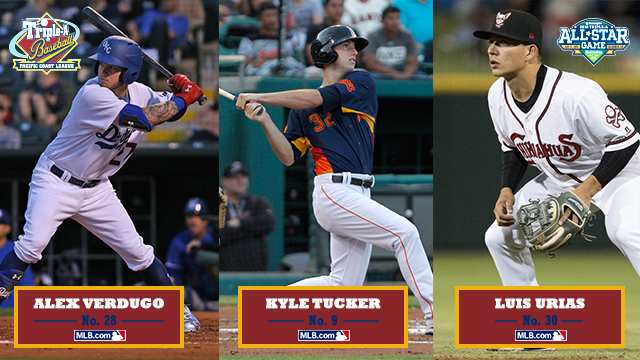 With the Huntington Bank Triple-A All-Star Game presented by Gildan less than two weeks away, the Pacific Coast League unveiled its roster. The 31st annual contest, which pits the top talent from each of the two Leagues at Minor League Baseball's highest level, will be played on Wednesday, July 11 at Huntington Park in downtown Columbus, Ohio, home of the Columbus Clippers (Cleveland). The roster is made up of 13 elected players who have received the most votes from ballots submitted by club's field managers and general managers, members of the media and broadcasters, and online fan voting. The elected players are joined by 20 additional All-Stars selected by Pacific Coast League officials.

Marty Pevey, the Iowa Cubs' winningest manager, will skipper the roster featuring players from all 16 clubs, including a League-high four from both the affiliates of last year's World Series - the Fresno Grizzlies (Houston) and the Oklahoma City Dodgers (L.A. Dodgers). Nearly half of the players on the roster (16-of-33) have yet to appear in a Major League game, while 15 of the players are 25-years-old or younger.

Memphis pitcher Dakota Hudson , tabbed by MLB Pipeline as the St. Louis Cardinals No. 3 prospect, was the League's top vote-getter and will get the start. The PCL's ERA and wins leader will become the fifth hurler in franchise history to start a Triple-A All-Star Game, and the first since Chris Gissell in 2005. Oklahoma City southpaw and the League's top strikeout artist Manny Banuelos was the other elected starting pitcher. Relievers R.J. Alvarez (Round Rock) and Pat Venditte (Oklahoma City) were also elected; Alvarez has a PCL-best 15 saves, while the ambidextrous Venditte has limited opponents to a .169 average.

The Fresno Grizzlies, owners of Triple-A Baseball's second-best record, will have two starters on the infield, A.J. Reed (1B), whose 18 homers are the second-most in the League, and J.D. Davis (3B), who has hit .337. New Orleans' Eric Campbell (2B) and Sacramento's Chase d'Arnaud (SS) will draw the start up the middle; Campbell has reached base at a .430 clip, while d'Arnaud has scored 52 runs. Getting the start behind the plate is Milwaukee farmhand Christian Bethancourt (Colorado Springs). Omaha's Frank Schwindel , his team's top run producer, will be the designated hitter.

Jabari Blash (Salt Lake), the PCL's top home run hitter and off a three-homer performance against Reno on June 27, was the top vote-getter in the outfield. He will be joined by Albuquerque's Mike Tauchman and Reno's Socrates Brito . Tauchman has posted a .355 batting average and a .626 slugging percentage, totals that rank in the top three in the PCL. Brito will be making his first Triple-A All-Star appearance. He has topped all hitters in the League with a .358 average. Blash, Tauchman and Brito also make up three of the four players that enter PCL action today with an OPS north of 1.000.

The PCL will look to claim their second consecutive All-Star victory after last season's 6-4 triumph at Cheney Stadium in Tacoma. Renato Nunez (Nashville) earned PCL Top Star honors after mashing the decisive three-run homer. In the 20 years since the event changed to the current IL vs. PCL format, the International League has taken 12 of the 20 contests.