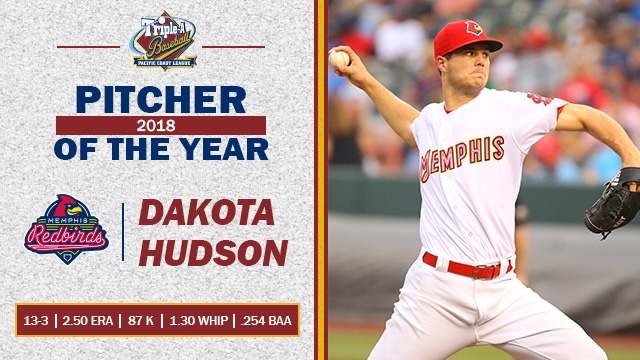 ROUND ROCK, Texas - Memphis Redbirds right-hander Dakota Hudson was the runaway choice for the Pacific Coast League's 2018 Pitcher of the Year, the League office announced Thursday. Hudson netted over 85 percent of the votes of the League's field managers, media representatives and broadcasters to become the first Memphis hurler to win the PCL's top pitching honor.

Hudson is the circuit's leader in wins (13) and ERA (2.50) after tossing 111.2 innings over 19 starts for the American Southern Division champion Redbirds. Hudson allowed just one ball to leave the yard all year; he is the only pitcher in Minor League Baseball this season to toss at least 110.0 innings and allow one or fewer home runs. Opponents hit a paltry .254 (107-for-422) off him, the fifth-lowest mark among PCL starters. Additionally, Hudson struck out 87 hitters while walking 38.

The 34th overall pick of the 2016 draft was the ace of a Memphis staff that has posted the League's best team ERA on the season. Hudson was especially impressive at his home AutoZone Park, where he posted a 1.59 ERA (62.1 IP, 11 ER), going 7-1 in 10 starts. He worked a season-high eight innings on four occasions, the most starts of eight-plus innings among PCL pitchers this season. In his May 26 outing of eight innings, Hudson struck out a career-high nine hitters in Memphis' 4-0 win over Colorado Springs. Hudson, who was ranked by Baseball America as St. Louis' seventh-best prospect entering the season, allowed one or fewer runs in nearly half (9) of his 19 starts. The Tennessee native won a season-best seven consecutive decisions, over an eight-start span, from June 7 until July 19, a stretch in which he had a 1.97 ERA (50.1 IP, 11 ER).

Hudson was both a mid- and postseason PCL All-Star. He was elected the League's starting pitcher in the 2018 Triple-A All-Star Game and struck out one in an inning of work. Hudson's accomplishments this year also include a selection to the SiriusXM All-Star Futures Game; pitching for the U.S. Futures, he retired all three batters he faced. The Mississippi State product was rewarded for his season's efforts with his first Major League call-up on July 27, and he has been pitching out of the St. Louis bullpen ever since.

For the second consecutive season, Hudson has been named a League's Pitcher of the Year. He was tabbed the Double-A Texas League's top hurler in 2017 after recording a League-best 2.53 ERA over 114.0 innings. In his third season with the Cardinals organization, Hudson has gone 29-10 with a 2.71 ERA (292.1 IP, 88 ER) with 210 strikeouts over 70 outings (45 starts) in his professional career.