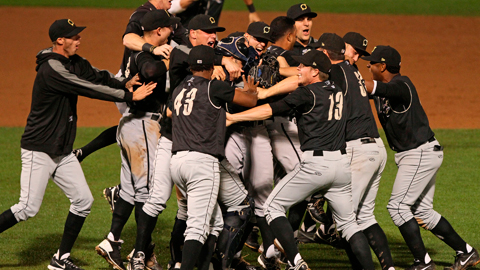 Before the Pacific Coast League playoffs began, the least likely team to come away with the title figured to be Omaha. After all, the Storm Chasers entered the postseason by winning the American Northern Division with a 70-74 record.

But baseball is a funny game.

Omaha wrapped up its improbable championship run in emphatic fashion Saturday night, rolling past Salt Lake 10-5, to win the best-of-5 Finals in four games. It's the Storm Chasers' second title in three years.

"It's very exciting. This year's been really an up-and-down year for us, with a lot of changes, guys going up to the big leagues, coming back down. It wasn't easy, but these guys just kept battling," Omaha manager Mike Jirschele said. "It just goes to show the depth in our organization, 'cause the kids that came up from Double-A did an outstanding job and really contributed to this team."

The Storm Chasers posted one-run victories in a rare series-opening doubleheader before dropping a 9-0 decision on Friday. They left little doubt in the clincher.

Lane Adams led the way, going 3-for-5 with four RBIs. His bases-loaded triple highlighted a six-run eighth inning that extended Omaha's lead to 10-2.

"I thought my season was over in Double-A, but I got the call to replace some guys who were called up to the big leagues, and that was a blast. I'm just grateful for the opportunity," Adams said. "I had kind of pressured myself to do too much in the first games, and a couple of the players just told me to relax, be myself. So to help the team in a crucial spot was big for me, big for the team."

"I tell you what, that was probably the toughest series I've ever had as a manager to win," Jirschele said. "We won the doubleheader early, but they were both by one run. It put us up two games, but I knew coming here [to Salt Lake] that it'd be tough to sneak one out of here, with their hitting and their pitching.

"During the regular season, we finished four games under .500, but I don't think our record really shows what type of team we were. I think they really jelled with those young kids, they brought a little spark to the club and everything started just working our way."

Brian Sanches (2-0) recorded his second postseason win after allowing two runs on nine hits and a walk with one strikeout over five innings.

The Storm Chasers earned a spot in the Triple-A Baseball National Championship against International League representative Durham on Tuesday in Allentown, Pa.

Efren Navarro went 3-for-5, drove in two runs, scored three times and fell a double shy of the cycle for the Bees. Salt Lake starter Matt Shoemaker (0-1) was charged with four runs on 10 hits over 5 2/3 frames.

Jonathan Raymond is a contributor to MiLB.com. This story was not subject to the approval of the National Association of Professional Baseball Leagues or its clubs.