Rangers' Class A affiliate yields one hit in doubleheader sweep 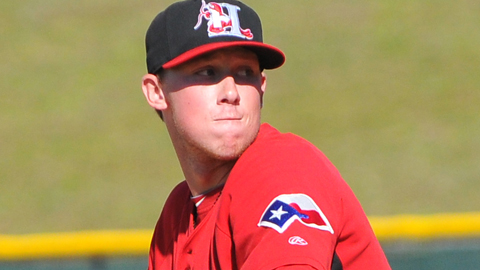 Hickory Crawdads manager Corey Ragsdale has been in professional baseball for 13 years and he's never seen anything quite like what his team accomplished Sunday afternoon.

Four Crawdads combined on the team's first no-hitter in four years to complete a doubleheader sweep of the Delmarva Shorebirds after C.J. Edwards pitched a complete-game one-hitter in the opener.

Ragsdale's corps of Rangers prospects ended up holding the Shorebirds hitless over the final 13 innings.

"I've been a part of a seven-inning no-hitter when I played, but like this, where you piece it together with four guys in seven innings, that's probably kind of unique," Hickory's first-year manager said.

The no-hitter was the Crawdads' first since Martin Perez combined with two relievers to beat Bowling Green, 5-0, in his South Atlantic League debut on April 11, 2009.

Ironically, Luis Parra started Sunday's gem in his SAL debut. Ragsdale had Parra penciled in to start again in four days, so the 21-year-old left-hander was on a 35-pitch limit. He struck out three and walked one over three innings.

Ragsdale said Parra began nervously, walking Gregory Lorenzo on four pitches and falling behind Lucas Herbst, 2-0, in the bottom of the first. The native of the Dominican Republic recovered quickly, pairing with David Lyon to record a strike-em-out, throw-em-out double play after Lorenzo attempted to steal.

"His fastball [sitting 90-93 mph] and curveball were good," Ragsdale said. "He was able to throw them both for strikes. He mixed in a few changeups, too, but they had a lot of lefties going, so he didn't need it much."

Keone Kela, Ryan Bores and Alex Claudio followed Parra, with Bores (1-1) picking up the win and Claudio getting the save.

Kela, drafted in the 12th round last season, was making his first appearance since Opening Day after spending time on the disabled list with forearm stiffness. The 20-year-old right-hander fanned one in a perfect inning.

"He was kind of getting his feet wet again," Ragsdale said. "He went out and attacked the zone."

The Crawdads faced only one scare as Tucker Nathans blooped an apparent hit up the middle off Kela in the fourth. Shortstop Luis Marte managed to track down the soft liner, fully extending to preserve the no-hit bid.

Bores was credited with the win after Rangers No. 9 prospect Joey Gallo scored on Jordan Akins' groundout in the top of the fourth. The 22-year-old right-hander struck out one and walked one over two innings and has pieced together four consecutive scoreless outings, spanning 10 1/3 frames, since surrendering six earned runs in his first two appearances.

"He has a very good sinker," Ragsdale said. "I think in his first couple outings, he had a little bit of bad luck. Sinker guys give up hits, but Bores, he gets a lot of double-play balls. His first outing, he gave up some soft hits that hurt him, but he's been really good his last four or five outings."

Claudio closed out the Minor Leagues' eighth no-hitter of the season, securing his sixth save with a 1-2-3 seventh. In 27 2/3 innings, the 21-year-old southpaw has a 1.63 ERA and 36 strikeouts against four walks. His fastball clocks in the 86-87 mph range, but he counters it with what Ragsdale calls a "Bugs Bunny" changeup that drops as low as 68 mph.

"He has good arm action," Ragsdale said. "It's ridiculous. He doesn't have overpowering stuff, but the kid gets up on the mound -- and has guts. He wants the ball in close situations and, to be honest, there's nobody I'd rather have out there late in a game."

In the opener, Edwards -- Texas' 20th-ranked prospect -- gave up an RBI single to Nik Balog in the bottom of the first but didn't allow another hit the rest of the way. The 21-year-old right-hander struck out seven and walked two in his first professional complete game.

Edwards (5-1) is emerging as one of the Minor Leagues most unique stories. A virtual unknown as a high schooler, he fell to the 48th round of the 2011 Draft, despite lacking a major college commitment and signed with Texas for $50,000.

In 10 starts with short-season Spokane last year, he posted a 2.11 ERA with 60 strikeouts in 47 innings. This season, he ranks third in the SAL with 54 strikeouts and seventh with a 2.05 ERA. His fastball runs into the mid-90s and he's developing a curveball and changeup that could become solid Major League pitches in time.

At 6-foot-2 and 155 pounds, he still has a lot of room for growth and is looking more and more like a special find by the Rangers' scouting staff.

"He's learning to pitch when he doesn't have his best stuff," Ragsdale said. "He started off the game today with a couple of walks and he didn't have his feel for his stuff. He got out of the inning and then he settled in. He didn't panic, he just minimized the damage in the first inning, then went out and competed and battled for the whole seven innings.

"The kid has very, very good stuff. He's up into the mid-90s with his fastball, he has a very, very good curveball and his changeup has improved a lot, especially this year. He's gained the confidence to throw that change in hitters' counts, too."

Jake Seiner is a contributor to MLB.com. Follow him on Twitter at @Jake_Seiner. This story was not subject to the approval of the National Association of Professional Baseball Leagues or its clubs.