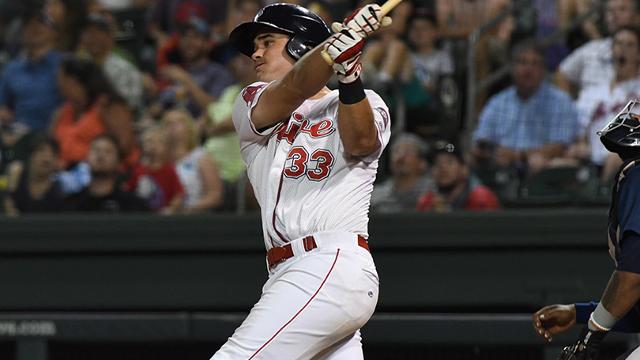 Tucker Tubbs has strung together 11 hits in his past 18 at-bats for Class A Greenville over a four-game span. (Mike Burton/Greenville Drive)

After putting together a career night at the plate for Class A Greenville, Tucker Tubbs returned to his cell phone in the clubhouse and saw a message from his father begging the same question that was running through his mind.

Had he ever done that before?

The Red Sox slugger recorded his first career five-hit game as the Drive grinded out a 9-6 victory over the Tourists in 12 innings at McCormick Field. Tubbs doubled three times -- his first game with three extra-base hits -- and singled twice while driving in two runs and scoring once.

"It really was crazy. I honestly can't remember a time, ever," the Tennessee native said. "I just felt really comfortable and I just didn't miss my pitch when I got it. I had a plan going up there every at-bat for what I was looking for and I had an idea of what the pitcher was going to do, so I think that really helped."

In 54 games this season, Tubbs is hitting .259/.333/.389 with three homers, 25 runs scored and 20 RBIs. The game marked his fourth consecutive multi-hit game after stringing together six hits in his previous 12 at-bats over a three-game span.

Tubbs started off in the second inning with a run-scoring single to left field off Asheville starter Ty Culbreth following a leadoff triple by Tyler Hill. Up against Culbreth to lead off the fourth, the University of Memphis product swung at the first offering and popped out to first base.

"I definitely wasn't thinking about any adjustments," Tubbs said. "Just basically keeping it simple and not trying to do too much or get too big. I stay out of my head as much as possible and not try to change anything."

Ryan Scott led off with a two-base knock in the fifth against reliever Jared Gesell and Tubbs followed with a line-drive double into left to drive Scott in. Tubbs doubled again in the eighth after Baldwin's leadoff single to put runners in scoring position for Steven Reveles, who bounced out to push the run across.

"You just try to stay locked in," the ninth-round pick in 2015 said. "After I got the first few hits, I was like, 'Well, you're having a good day. You're pretty locked in.' So it wasn't that hard after the first few hits because I was feeling so good."

Tubbs was left stranded after knocking another double with two outs in the 10th, but wound up back in the thick of things in the three-run 12th. He reached on an infield single and eventually scored on a throwing error by Asheville shortstop Carlos Herrera to break the 6-6 tie.

"We were back and forth there in extra innings," he said. "So it was a fun game to be a part of, which really made it not too difficult to stay locked in."

Hill finished 3-for-6 with a pair of RBIs and a run scored.

Max George, Manuel Melendez and Jacob Bosiokovic all went yard for the Tourists.