Rangers prospect drives in three runs to fend off elimination 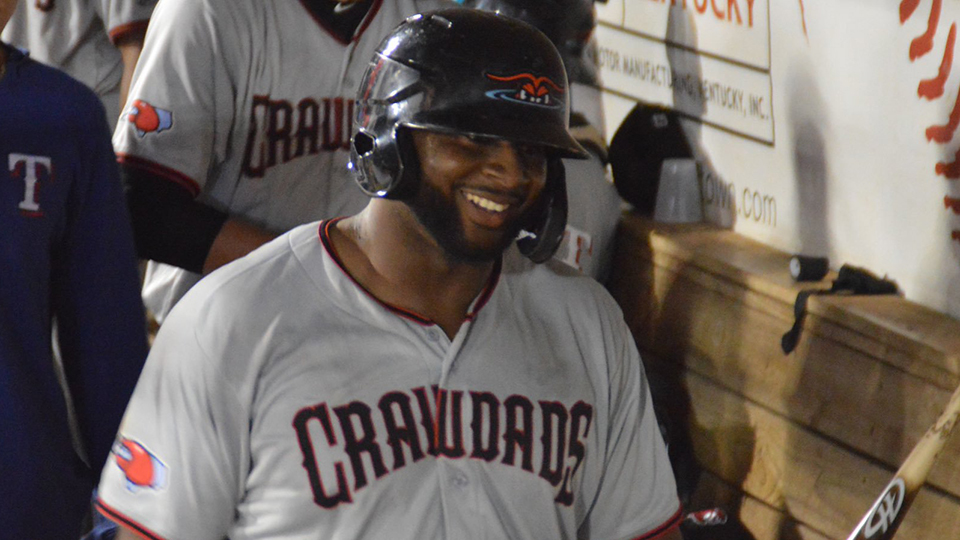 Tyreque Reed is 5-for-18 (.278) with two homers and four RBIs in five playoff games. (Hickory Crawdads)

Tyreque Reed got Hickory started, then supplied the insurance. And the team's season was extended because of it.

Facing elimination in the best-of-5 South Atlantic League Championship Series, the Rangers first base prospect homered and drove in three runs to power the Crawdads to a 5-1 win over Lexington on Thursday at Whitaker Bank Ballpark.

Hickory trails in the series, 2-1. It didn't score in Game 2, but manager Matt Hagen's message entering Thursday's game was that all the pressure was on the opposing dugout. Reed, who said he always tries to play relaxed, agreed with that approach.

"It's hard to sweep a team in a championship," he said, "and it's kind of hard to win that one game when you got so much relief after two."

Reed flied out with two runners on in the first inning but redeemed himself in the third. After Jax Biggers walked and moved to second on a balk by starter Charlie Neuweiler, Reed opened the scoring with a single to right field.

During the 22-year-old's at-bat in the seventh, he lost the grip on his bat and accidentally brushed the catcher. He began to retreat to the dugout to grab some pine tar, but home plate umpire Colin Baron wouldn't allow it. Hickory's coaching staff tried to challenge the ruling; they had no luck.

It turned out Reed and his bat didn't any more help. After he fouled off a few fastballs, he expected a curveball from southpaw Bryce Hensley. He was right and sent it the other way for a two-out, two-strike homer.

Reed nearly left the yard again in the ninth but settled for a sacrifice fly to the warning track in right field. The three RBIs matched his personal best in what started as a trying campaign for the 2017 eighth-round pick. He began the year with Class A Advanced Down East but returned to extended spring training in mid-May after hitting .216 in 32 games with the Wood Ducks. An injured knee suffered by tripping in a pothole sidelined him for a month. When healthy, he returned to his 2018 home of Hickory and posted an .892 OPS through the end of the regular season.

"What I was thinking and doing tonight, it worked," he said. "So keep doing that and carry that into the next season."

Miguel Aparicio supplied the rest of the Crawdads' offense when he took Neuweiler deep to right for a two-run shot in the fourth, and Hickory outhit Lexington, 10-2.

Rangers No. 25 prospect Ricky Vanasco struck out the first five Legends to bat. The right-hander faced the minimum through three innings but left after walking the bases loaded with two outs in the fourth. Tai Tiedemann took over and got Reed Rohlman to ground to first base to escape the jam.

The Legends manufactured their first hit and only run in the next frame. Rudy Martin worked a two-out walk against Tiedemann, stole second and came home on a single by Rubendy Jaquez.Tiedemann retired five of the next six batters he faced. The Crawdads called on Lucas Jacobsen for the final two outs in the seventh before Nick Snyder was perfect over the final two innings.

"It makes it a lot easier [to hit] when the pitchers are doing their job," Reed said.

Game 4 is Friday night at Lexington.