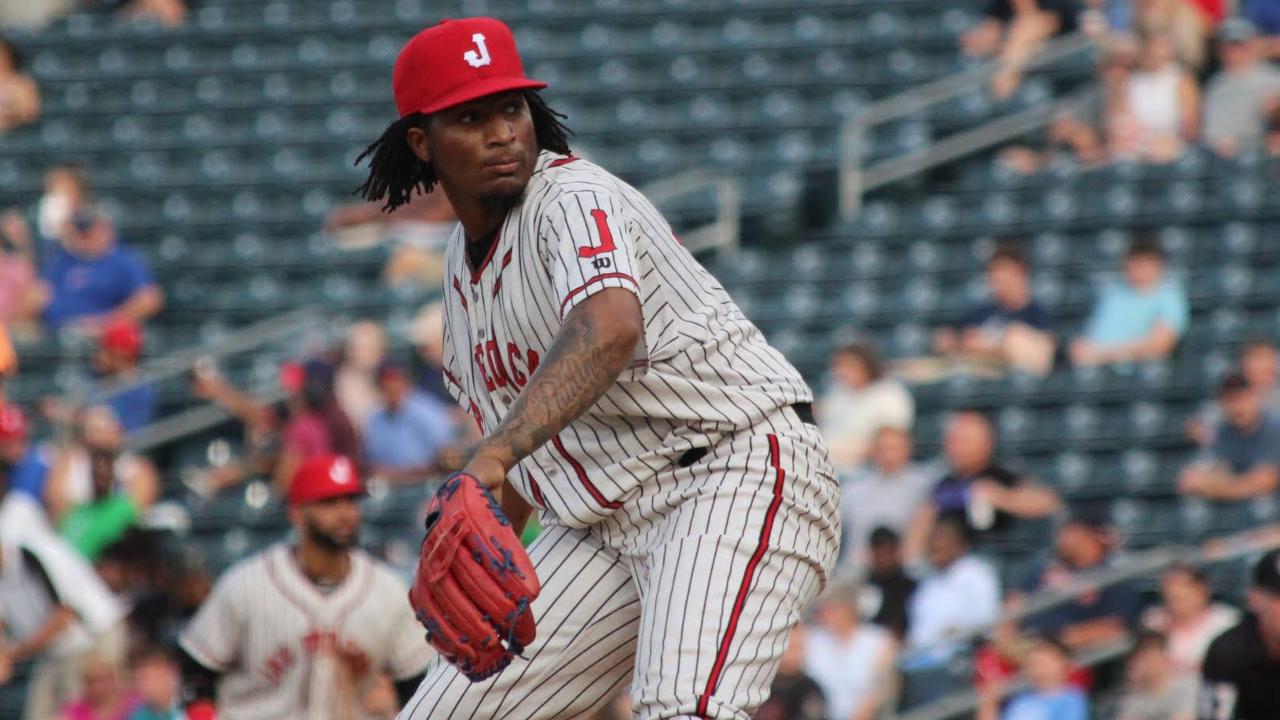 While numbers crunchers keep an eye on pitch counts and innings, Sixto Sanchez continues to pile up zeros.

It was the third straight scoreless outing for the Marlins' top-ranked farmhand, who improved to 8-4 after beginning the season 0-2 with Class A Advanced Jupiter. Sanchez sports a 2.76 ERA across 88 innings with Jacksonville.

The right-hander extended his scoreless streak to 19 innings. He's allowed only two runs -- one earned -- in the last 25 1/3 frames.

Sanchez yielded a base hit to Clayton Andrews in the first inning and retired the next three batters. In the second, the 21-year-old walked Bruce Caldwell and gave up a single to C.J. Hinojosa, then sat down three in a row to escape the jam unscathed.

Working in and out of trouble was a theme in Sanchez's 15th Double-A start.

In the fourth, an inning-ending unassisted double play -- a line drive by Hinojosa to No. 13 Marlins prospect Lewin Diaz at first base -- erased Weston Wilson, who singled to lead off the frame.

Max McDowell punched a one-out single to left in the fifth, but Alec Bettinger (5-7) rolled into a 6-4-3 twin killing to dash the Shuckers' scoring hopes.

With a 2-0 lead in the sixth, the 6-foot, 180-pounder got two quick outs. Dillon Thomas walked and Wilson stroked a double to left field, but Sanchez struck out Caldwell on three pitches to end the threat and cap his 85-pitch outing.

It was only the second time in his past five starts that Sanchez threw at least 85 pitches. After defeating Pensacola on his 21st birthday in his last start July 29, Jacksonville manager Kevin Randel noted Sanchez's pitch count will be closely monitored as the season winds down.

"That's what we're going to do. We're going to conserve his innings down the road here to the stretch," Randel told MiLB.com. "We don't want to shut him down. We want him competing all the way to the end of the season, so we're going to limit some innings -- limit some extended outings. So, if he's going to go out there and give us six innings every time, that's fine with us. We'll just go ahead and use the bullpen a little more down the stretch run."

Josh Roeder, Alejandro Mateo and Tommy Eveld, who earned his fourth save with a 1-2-3 ninth, limited Biloxi to a run on one hit and a walk while striking out three over the final three innings.

Jacksonville has won four of its last five games, including a 5-0 victory Saturday, anchored by seven hitless innings thrown by Marlins No. 17 prospect Jorge Guzman. Randel noted afterward that the team's pitching philosophy is taking root.

"[The starters] want to go seven innings. It's something we … it's really [Jumbo Shrimp pitching coach] Bruce Walton, who keeps repeating what we want. Guzman, Sixto and [Edward Cabrera] are keeping us in ballgames."

Sunday marked the fifth time Sanchez has not allowed a run, going at least six innings each time. Following his June 16 gem, Waltontold MiLB.com, "As with any young pitcher, it's the same. We've been working on changing speeds. Everything we've worked on the past three weeks, he put it together. He was executing three pitches, changing speeds and keeping hitters off balance."

Jacksonville's hurlers stand third in the Southern League with a 3.22 ERA, trailing Montgomery (3.06) and Mississippi (3.17). The Jumbo Shrimp are tied with Biloxi for the circuit's top WHIP at 1.15.