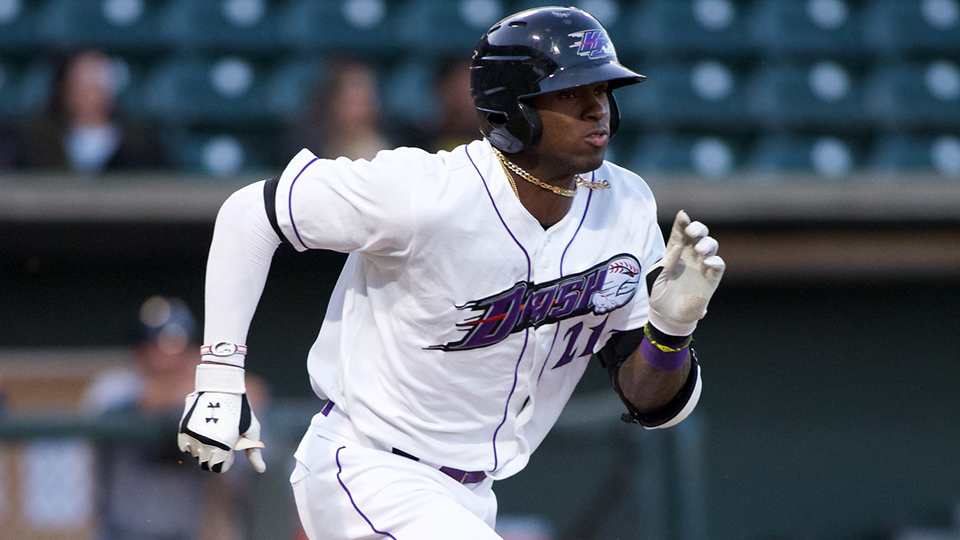 Luis Robert went 34-for-75 (.453) over 19 games with Class A Advanced Winston-Salem this month. (Chris Robertson/MiLB.com)

The White Sox are promoting the No. 37 overall prospect to Double-A Birmingham, the club announced Tuesday. No. 16 Chicago prospect Zack Burdi is also jumping to the Southern League while No. 11 Steele Walker will join Class A Advanced Winston-Salem to take Robert's spot in the Dash outfield.

Tweet from @whitesox: Luis Robert and Zack Burdi have been promoted to @BhamBarons, with Steele Walker moving up to @WSDashBaseball. https://t.co/b2ePe7aEo9

Robert has been one of the hottest hitters in the Minor Leagues to begin the 2019 season. The 21-year-old outfielder leads all qualified Minor Leaguers with a .453 average, .920 slugging percentage and 1.432 OPS through 19 games with Winston-Salem. His .512 on-base percentage ranks second among the 931 qualifiers, trailing only Justin Toerner's .522 for Class A Advanced Palm Beach. Robert also leads the Carolina League with eight homers, 24 RBIs and 69 total bases and ranks second in the circuit with eight stolen bases. He is the only Minor Leaguer with at least eight homers and eight stolen bases this season.

Chicago signed Robert for $26 million out of Cuba in May 2017 because of his overall potential. The right-handed slugger has above-average power and receives even better grades for his run, arm and fielding tools. Those last two are notable since he made all 13 of his defensive starts with the Dash in center field.

Robert struggled with injuries in 2018, hitting just .244/.317/.409 in 32 games with Winston-Salem last season while dealing with multiple thumb injuries. He made up for some of the lost time by playing 18 games in the Arizona Fall League and hitting .324/.367/.432 before a hamstring problem ended his campaign early. Robert missed time with a left-hand contusion this month but was never placed on the injured list. He looked fully recovered in his last game with Winston-Salem on Monday, going 4-for-5 with a homer and a triple.

Burdi is getting the bump to Birmingham from Class A Kannapolis. The 24-year-old reliever made three appearances for the Intimidators, allowing three earned runs on four hits and one walk while fanning six in three innings. He's recovering from Tommy John surgery in 2017, which limited him to only seven Arizona League appearances last season and five more in the Fall League.

Walker, a second-round pick last year out of Oklahoma, hit .365/.437/.581 with three triples, 10 doubles and four stolen bases in 20 games with Kannapolis before earning his promotion to the Carolina League.

Padres call up Quantrill for his Major League debut: The No. 8 overall pick from the 2016 Draft is about to join the prospect party in San Diego. Quantrill will make his Padres debut with a Wednesday start against the Braves in Atlanta, according to MLB.com's AJ Cassavell. The 24-year-old right-hander has a 4.68 ERA and 1.36 WHIP with 24 strikeouts and eight walks over 25 innings at Triple-A El Paso. His changeup is considered a plus pitch, while his low-to-mid-90s fastball could also be an above-average offering. Quantrill would be part of a temporary six-man rotation, making it possible that his promotion is just a brief one.