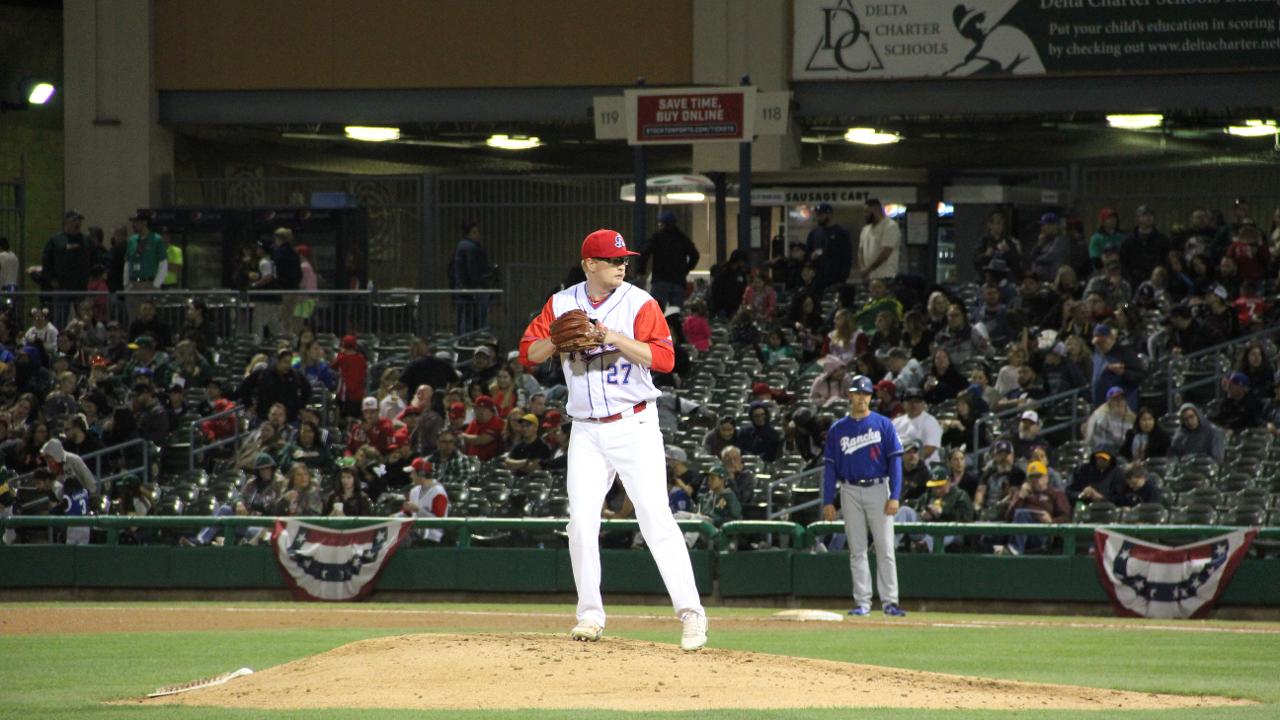 STOCKTON, Calif. - In what's becoming a theme on the season, a fast start didn't translate into a win for the Stockton Ports on Thursday night at Banner Island Ballpark. Stockton plated three runs in the bottom of the first inning but saw the Modesto Nuts score the final four runs of the ballgame over the final three innings as the Nuts snapped a three-game losing streak and handed the Ports a 6-4 loss to open a three-game series.

Stockton opened the bottom of the first with a double off the bat of Nick Allen and, two batters later, Austin Beck walked and Lazaro Armenteros singled to load the bases with one out. Alfonso Rivas followed and grounded into a fielder's choice force play that brought in the first run of the game. Jeremy Eierman came up next and delivered a two-run triple to left-center that gave Stockton an early 3-0 lead.

Modesto got a run back in the top of the second on a leadoff home run to right by Anthony Jimenez. The Nuts got another run back in the third but ran themselves out of a chance to tie the contest. With runners at the corners and one out, Eugene Helder singled to right to score Connor Kopach and make it a 3-2 ballgame. With runners still at the corners and still only one out, Joe Rizzo flied out to deep left-center field. Luis Liberato tagged up from third and was going to score easily. Helder, though, kept on running after the ball was caught and was late in retreating to first. A relay throw to first beat Helder and also beat Liberato's crossing of home plate as the run was waved off and Stockton maintained a 3-2 lead.

Ports starter Xavier Altamirano did not factor into the decision after going 4 1/3 innings and allowing two runs on five hits while walking four and striking out three.

The Ports got their lead back to two runs in the bottom of the third when Eierman came up with two on and one out and singled to left to run the Stockton lead to 4-2. It was the last run allowed by Nuts starter Ray Kerr who also received a no-decision, going 2 2/3 innings and allowing four runs on four hits while striking out one.

Modesto's bullpen, a combination of Jake Haberer, Reggie McClain and Sam Delaplane (2-0) combined to toss 6 1/3 scoreless innings while allowing just one hit and walking one in that span to shut down the Stockton offense the remainder of the night.

Jesus Zambrano took over for Altamirano in the fifth and worked into the seventh. With one out in the seventh, Zambrano walked Jack Larsen, who went to second after a wild pitch. Luis Liberato followed with a single to left that put runners at the corners and chased Zambrano from the game. Seth Martinez came on next and saw Liberato steal second base. The throw down from Ports catcher JJ Schwarz sailed into center field, allowing Larsen to score and Liberato to take third base. After Martinez induced a groundout with the infield in for the second out of the inning, he uncorked a wild pitch while working to Rizzo, allowing the tying run to come in from third and knot the game at 4-4.

Both seventh inning runs were charged to Zambrano who worked two innings. Martinez did not allow a run of his own over 1 2/3 innings worked.

Pat Krall (0-1) entered to work the ninth for the Ports and gave up a leadoff triple to Kopach. Two batters later Liberato hit a line drive to left that skipped in front of Armenteros and then by him to the wall. Liberato scored on what was ruled a single and a three-base fielding error to give the Nuts their first lead of the night at 6-4.

Krall suffered the loss, allowing two runs on four hits in his lone inning of work.

Delaplane pitched the ninth inning for Modesto and worked around a leadoff walk drawn by Jonah Bride, retiring the next three batters in a row to end the game and pick up the victory.