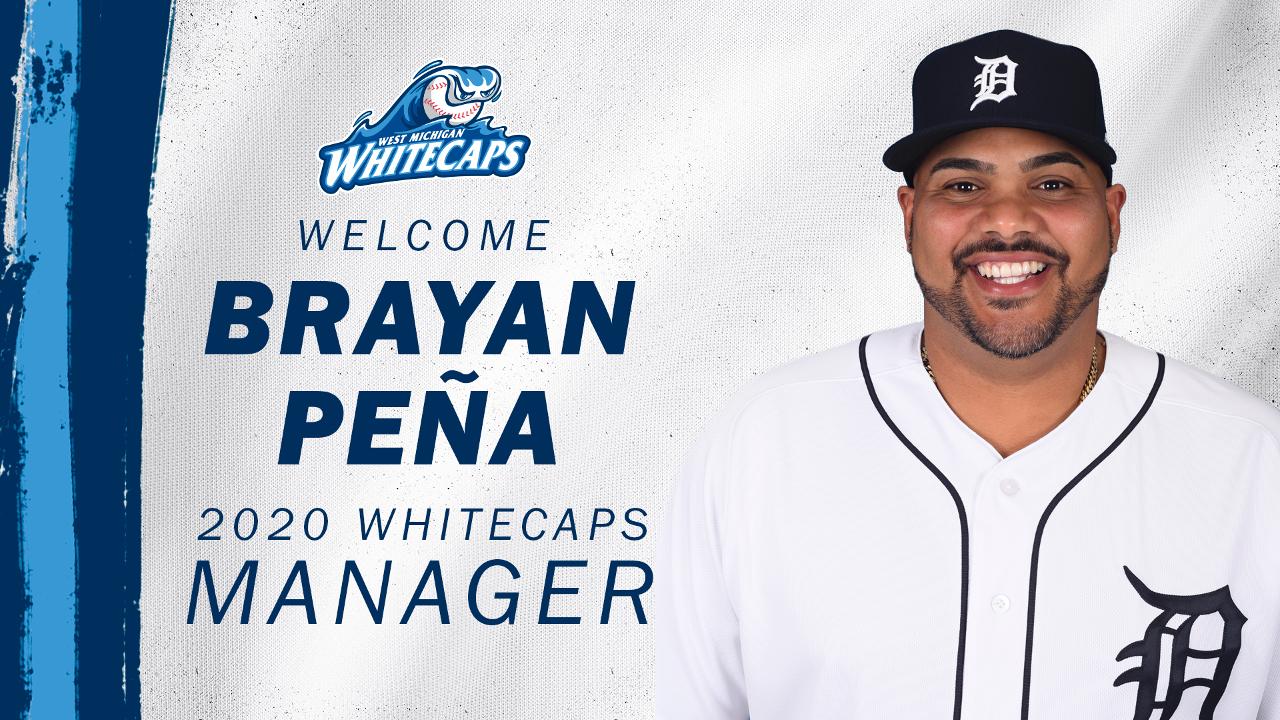 COMSTOCK PARK, MI - Former Detroit Tigers catcher Brayan Peña has been named the 14th manager in West Michigan Whitecaps history, in a move announced in conjunction with the Detroit Tigers on Tuesday.

Peña arrives in West Michigan after spending last season with the Connecticut Tigers in his second professional season as a manager after a 12-year playing career. Peña replaces Lance Parrish, who spent two seasons as manager before being reassigned as a Special Assistant to Tigers Executive Vice President, Baseball Operations and General Manager Al Avila.

"Brayan will be a welcome addition to our clubhouse," said Whitecaps Vice President and General Manager Jim Jarecki. "We've heard nothing but great things about Brayan. He's a rising manager in the Tigers system."

The native of Havana, Cuba, played for five different Major League teams, and was part of the 2013 Tigers Central Division Championship roster. Peña broke into the big leagues in 2005 as a member of the Atlanta Braves before joining the Kansas City Royals for four seasons before his Tigers arrival.

Peña's 2013 season in Detroit was punctuated by a .297 batting average - the highest in his Major League career while playing in 71 games as the backup to former Tigers and Whitecaps catcher Alex Avila. In his final game as a Tiger, Peña took over for an injured Avila in Game 5 of the American League Championship Series against the Boston Red Sox, going 1-for-3 with an RBI-single. After leaving Detroit, Peña spent the next two seasons as the primary catcher with the Cincinnati Reds in 2014 and 2015 before playing his final big-league season with the St. Louis Cardinals in 2016.

Upon the start of the 2018 season, the now 37-year old backstop returned to the Tigers as a Minor League free agent but quickly transitioned into a role in coaching. Later that summer, Peña was named the manager of the Tigers West Gulf Coast League squad, where he led the team to its first-ever Gulf Coast League championship since entering the league as a full-time member in 1995.

Peña's assignment came among several Tuesday moves in the Tigers minor-league ranks, including the appointment of John Murrian as Whitecaps hitting coach. Murrian served as hitting instructor for the GCL Tigers-West team last season after five seasons as the Tigers bullpen catcher and five more playing in the minor leagues. The remainder of Peña's Whitecaps field staff will be announced at a later date.

"Brayan joins a long line of former Tigers to take over as Whitecaps manager," Jarecki said. "Peña was a fan-favorite in Detroit and we look forward to the experience he brings to the dugout."

The Whitecaps are preparing for the 2020 campaign with a return to the Midwest League Playoffs in their sights. Get information on 2020 season tickets by calling the Whitecaps front office at 616-784-4131 or by visiting www.whitecapsbaseball.com.