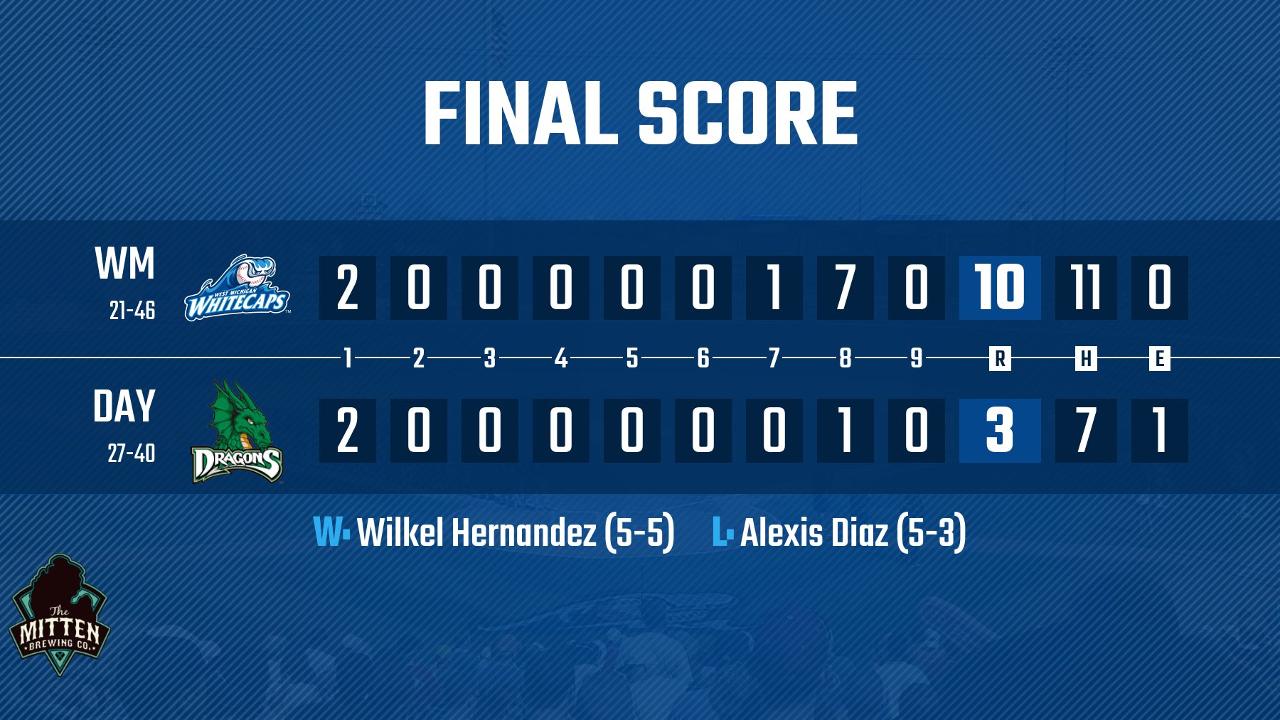 DAYTON, OH - For the first time in 10 games, the West Michigan Whitecaps tallied more runs than their opponent in large part to a seven-run eighth inning in defeating the Dayton Dragons by a score of 10-3 in front of 7,347 fans Thursday night at Fifth Third Field.

The victory snaps a nine-game losing streak while ending the Dragons 10-game winning streak. The losing skid was the longest since the Whitecaps lost nine straight during their 1994 inaugural season from July 22-30.

The Whitecaps took an early 2-0 lead in the first by scoring twice in an inning highlighted by Sam McMillan's run-scoring single, but the Dragons also plated a pair thanks in part to an RBI-single by Miguel Hernandez to tie the game at two. The game remained scoreless until the sixth, as pitcher Wilkel Hernandez settled down after a two-run first to toss five scoreless frames while striking out three. In the seventh, Avery Tuck lined a go-ahead solo home run to give West Michigan a 3-2 lead. An inning later, the flood gates opened as the Whitecaps scored seven times highlighted by run-scoring singles from Rey Rivera and Chris Proctor with a two-run single by Hector Martinez. Dragons outfielder Brian Rey launched a solo homer in the eighth, but Dayton came no closer as the Whitecaps enjoyed their first victory since June 2, and their first win in a nine-inning game since May 21.

Hernandez (5-5) earns his team-leading fifth victory on the mound, while Dragons reliever Alexis Diaz (5-3) gave up seven runs in relief to take his third loss. The Whitecaps improve their record to 21-46 while Dayton falls to 27-40. Whitecaps All-Star outfielder Ulrich Bojarski went 3-for-4 with a double, run scored and RBI, while Tuck collected a double and walk with his go-ahead homer in the seventh.

The Whitecaps return home to conclude the first half with a three-game series against the South Bend Cubs beginning Friday at 7:05 pm from Fifth Third Ballpark. Whitecaps pitcher Gio Arriera gets the start against Cubs righty Derek Casey. Broadcast coverage with Dan Hasty and Mike Coleman starts on the Whitecaps Baseball Network at 6:50 pm. Tickets are available for any Whitecaps 2019 home contest by calling the Whitecaps front office at 616-784-4131 or by visiting www.whitecapsbaseball.com.