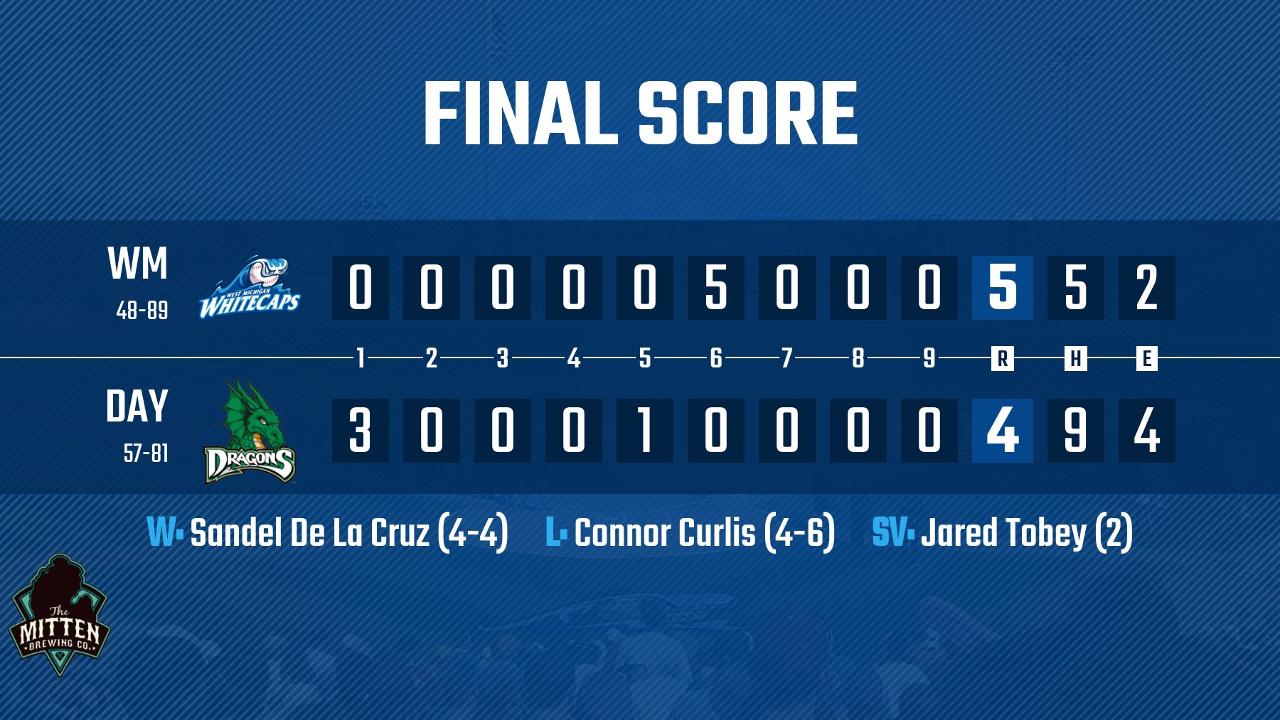 DAYTON. OH - A five-run sixth inning propelled the West Michigan Whitecaps to a 5-4 come-from-behind victory over the Dayton Dragons Saturday night in front of 9,189 fans at Fifth Third Field.

The victory marks the second straight day in which West Michigan completed a one-run win. The 'Caps have won back-to-back games on the strength of outstanding work by their pitching staff, headlined by the first double-digit strikeout game by starter Sandel De La Cruz.

The Dragons opened the ballgame with their first three hitters scoring in the first inning. Second baseman Claudio Finol blasted a two-run homer to left field to help give Dayton an early 3-0 lead. After the Dragons added a run in the fifth, the Whitecaps exploded to take the lead with a five-run sixth. Riley Greene ripped a bases-clearing, three-run triple and scored one pitch later on a wild pickoff throw to help West Michigan tie the game at four. After a two-out walk and stolen base by Dayton Dugas, a go-ahead single by Zach Malis gave the 'Caps a 5-4 lead. Meanwhile, Whitecaps pitchers settled down after a rocky first inning as De La Cruz and relievers Michael Bienlien and Jared Tobey combined to send the team to its second-straight victory.

De La Cruz (4-4) tossed six innings in a quality start featuring a career-high ten strikeouts to earn his fourth win of the year to end his season. Dragons lefty Connor Curlis (4-6) allowed all five 'Caps runs in relief in suffering his sixth defeat of 2019. Jared Tobey, reassigned to West Michigan earlier in the day to help a taxed bullpen, returned to strike out Dayton pinch-hitter Matt Lloyd in the ninth to end the game. The strikeout gave the lefty his second save as a member of the 'Caps. West Michigan's record improves to 48-89 overall in 2019 and 27-41 in the Midwest League's second-half standings. Dayton falls to 57-81 and 29-38 in the back half of the 2019 season. Greene led the Whitecaps at the plate with a 2-for-4 performance with three RBIs in the win.

The Whitecaps continue this season-ending three-game series against the Dayton Dragons at Fifth Third Field Sunday at 2:00 pm. Robbie Welhaf starts for West Michigan against Dayton pitcher Eduardo Salazar. Broadcast coverage with Dan Hasty begins on the Whitecaps Baseball Network at 1:50 pm. Tickets are available for any Whitecaps 2020 home contest by calling the Whitecaps front office at 616-784-4131 or by visiting www.whitecapsbaseball.com.