Dash expect to reach one million fans May 16

One fan could win one million dollars 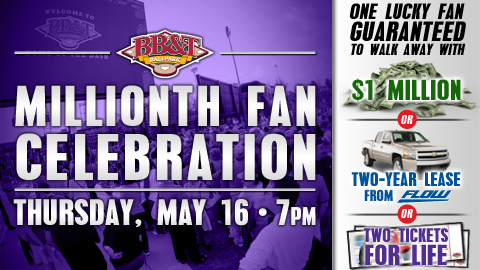 WINSTON-SALEM, N.C. (MAY 8, 2013) - Based on current projections following Wednesday's homestand finale, the Winston-Salem Dash expect to reach its one millionth fan at BB&T Ballpark on Thursday, May 16, when the Dash host the Myrtle Beach Pelicans at 7 p.m.

The night when the Dash do surpass one million fans at BB&T Ballpark, becoming the fastest High-A facility to reach that milestone, one lucky fan will play a game of chance on the field and win one of three prizes: one million dollars, a two-year lease on a $30,000 vehicle from Flow Companies, LLC, or two Dash tickets for life.

The exact date of the one millionth fan's entrance into BB&T Ballpark is subject to change based on game postponements or other unforeseen happenings. However, BB&T Ballpark has currently hosted 994,090 fans after welcoming 4,011 patrons on Wednesday, so the organization projects to reach the one-million mark next Thursday.

Following a four-game series at Potomac that begins Friday, Winston-Salem returns to BB&T Ballpark on Tuesday, May 14, for the opener of a six-game homestand. Every game during this upcoming homestand begins at 7 p.m. except for a 2 p.m. finale on Sunday, May 19.

Single-game tickets for Thursday's game and the rest of the upcoming homestand are on sale now. Fans can call the Dash at (336) 714-2287 or visit wsdash.com to be a part of history at BB&T Ballpark next week.