Winston-Salem honored as the top Class A team by publication 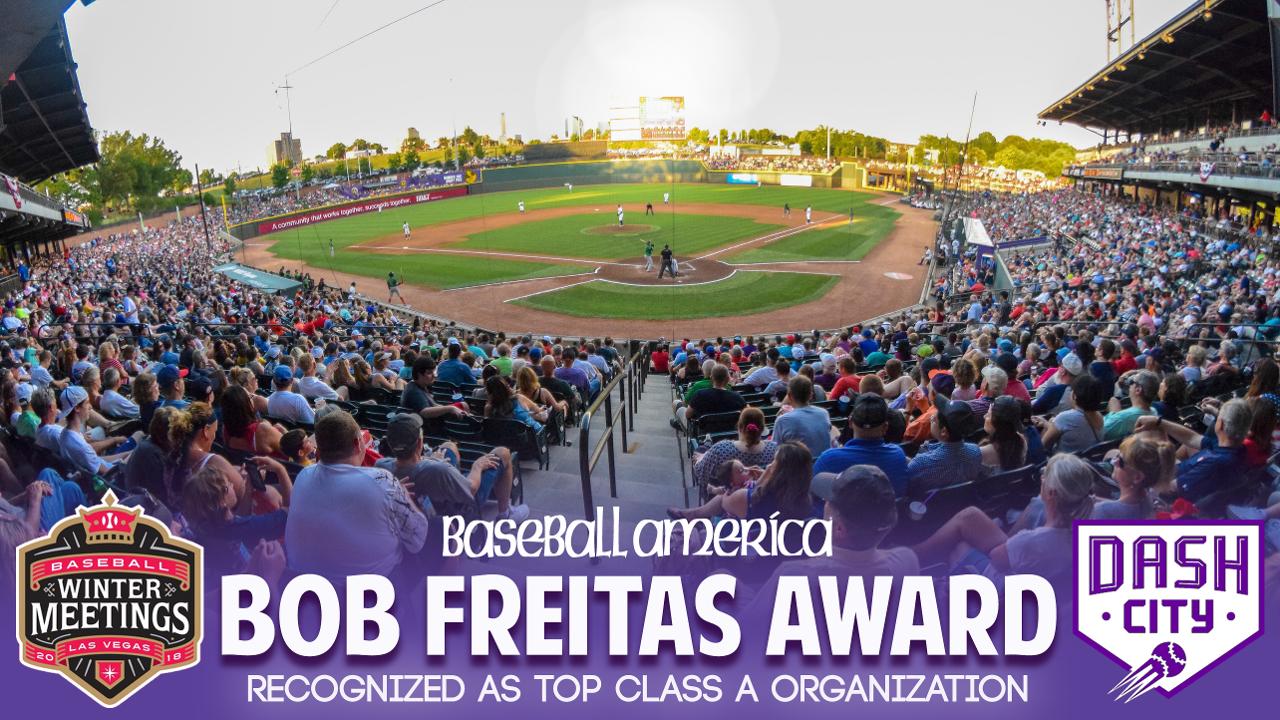 WINSTON-SALEM, N.C. (Dec. 4, 2018) - Following a banner 2018 season, during which the Dash led all High-A teams in attendance and topped the Carolina League in wins, the Winston-Salem franchise has been honored as the Class A recipient of the Bob Freitas Award, recognizing the top overall operation at each level of the Minor Leagues by Baseball America.

"The Freitas Award is a prestigious honor, and our organization takes a great deal of pride in being named this year's winner by Baseball America," said Dash Majority Owner Billy Prim. "This accomplishment would not be possible without the hard work of our entire staff and the tremendous support of our community."

The Freitas Awards, named after longtime Minor League Baseball ambassador Bob Freitas, have been presented by Baseball America annually since 1989 and recognize franchises that have demonstrated "sustained excellence in the business of Minor League Baseball." One franchise from each of MiLB's four classification levels (Triple-A, Double-A, Single-A and Short-Season/Rookie) is honored each year.

"There are 60 innovative organizations across Class-A baseball that are all dedicated to providing quality family-friendly entertainment. It is an honor to be selected by Baseball America as the Freitas Award winner for this level," said Team President C.J. Johnson.

For the fourth time in BB&T Ballpark history, Winston-Salem paced all 30 Class A-Advanced teams in total attendance by welcoming 292,774 fans to the downtown facility in 2018. This season, the team achieved 16 sellouts, including an incredible crowd of 9,011 fans, the largest in BB&T Ballpark history, for a 14-5 win over Down East on July 4. In 2018, the Dash also received an honorable mention by Ballpark Digest for Team of the Year, finishing as the only Class A team among the top four finalists.

Winston-Salem was one of 33 teams selected to participate in Minor League Baseball's "Copa de la Diversión," or "Fun Cup," initiative, which was a season-long event series specifically designed to embrace the culture and values that resonate with participating teams' local U.S. Hispanic/Latino communities.

Along with another banner year in regards to attendance and revenue, the Dash hosted several charity events, including an "Energize the Ballpark Night" on June 23, with a portion of the ticket proceeds going to Energize Ministries. In conjunction with the Vs. Cancer Foundation, the team also held "Cancer Survivor Night" on August 10 to help raise awareness and money towards cancer research.

On the field, the Dash dazzled with their play. Led by first-year manager Omar Vizquel, who was a three-time MLB All-Star and 11-time Gold Glove winner during his 24-year big league career, the Dash posted a league-best 84-54 record. Winston-Salem won the first-half and second-half Southern Division titles, marking the fourth time in the Dash era (2009-present) that the team had won both halves. The team's .609 winning percentage was fourth best in full-season Minor League Baseball.